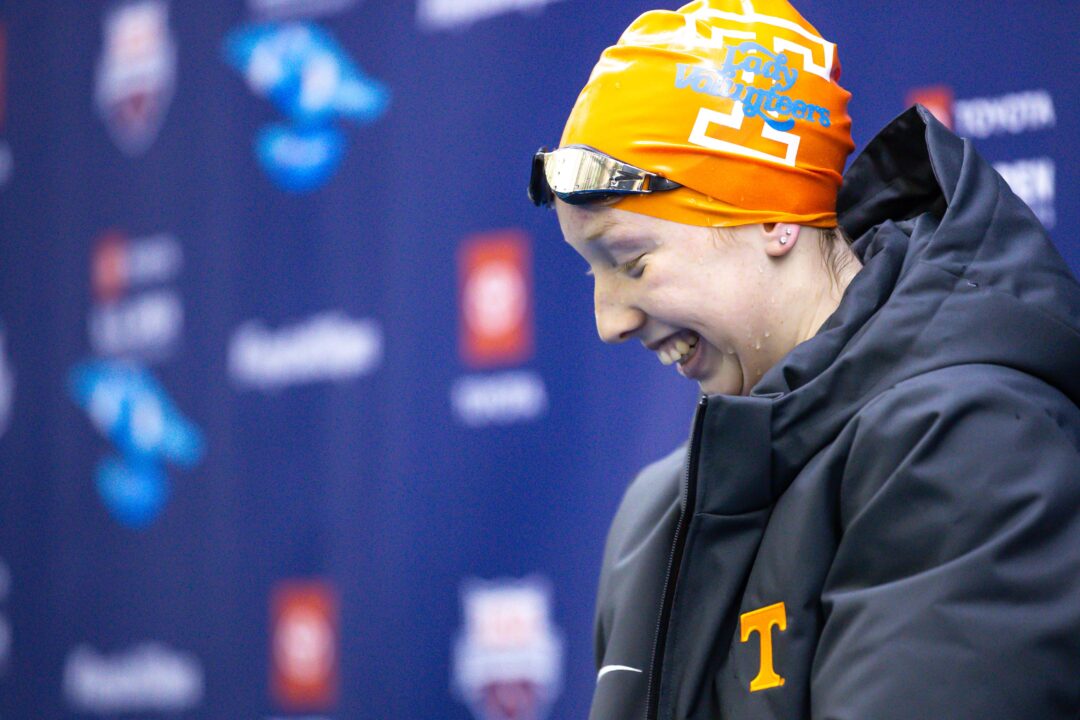 Tennessee's Summer Smith swam a time of 16:11.59 in the 1650 free, which ranks her 26th in the nation this season and will likely qualify her for NCAAs. Archive photo via Jack Spitser/Spitser Photography

Tennessee was one of the many schools that hosted a “last chance” meet for swimmers who still need to hit certain cut times to put themselves in a better position for qualifying for NCAA championships.

Historically, between 26-30 men’s swimmers are invited to NCAAs per individual event, and between 36-40 women’s swimmers.

At Last Chance meets, a swimmer can swim a race in a prelim, final, time trial, and relay leadoffs, but cannot swim a race endlessly to chase a better time.

For the women, this weekend is the last opportunity for them to swim faster times, as entries for the women’s NCAA meet are due by 11:59 pm Sunday night. Aside from the men’s Pac-12 Championships set to take place next weekend, the men’s NCAA qualification period is almost over as well, as entries are due on March 7.

The host team, Tennessee, took advantage of this meet as multiple swimmers hitting B-cuts, headlined by Summer Smith who posted the 26th fastest time in the NCAA this year for the 1650 free. Smith set a personal best time of 16:11.59 in the 1650 free, which is well underneath the NCAA cut line for the event last year. Smith is also ranked 33rd in the 400 IM, an event where she also has a good chance of qualifying in.

Although he is already qualified for NCAAs, Jordan Crooks swam a 19.24 50 free, which is a “B” cut and far from his personal best of 18.53. He swam the latter time last week at SEC Championships to become the fastest freshman ever and the fastest swimmer in the nation this year in the event. However, Crooks’ time from the last chance meet is his fastest time in the event aside from his swims at SECs.

Crooks also swam a 20.75 50 fly, which is a little slower than the 20.61 first half split that he swam in the 100 fly at SECs last week. Once again, his time at this meet is faster than any of his other swims not from this year’s SECs.

Tennessee was not the only team with fast swims, as swimmers from Louisville and Kentucky were able to get in potential NCAA qualifying times.

Kentucky senior Kyle Barker went a 3:42.68 in the 400 IM, which is a significant improvement from the 3:52.14 that he swam at SECs last week to finish 30th. The time ranks him 14th in the nation, and makes him almost guaranteed to qualify for NCAAs even with one more week of competition left after he failed to make the meet the past three seasons.

Hitting an NCAA “B” cut, Louisville’s Gustavo Saldo went 1:41.80 in the 200 fly, which was fast enough for him to place 4th had he swam that time at ACCs last week. His swim jumped him from 36th to 21st in the country this season, and puts him in a much stronger position for NCAAs.

Saldo’s teammate Dennis Loketev went a best time of 1:33.24 in the 200 free, which ranks as 31st in the nation. This position makes his NCAAs qualifying chances uncertain, especially with Pac-12s coming up. However, the swim gave him an outside shot of making the meet, as his previous season-best time did not even crack the top 50. Had Loketev swam this time last year, it would have ranked him 17th pre NCAAs, which shows just how much faster the event has gotten this year.

Another potential NCAA qualifying swim from Louisville was by Tatiana Salcutan, as she swam a 1:53.97 in the 200 back. Although the time is well under the 2021 NCAA cut line of 1:55.20, the time only places her 41st in the nation this year. Salcutan swam this event at NCAA Championships last year finishing 20th with a time of 1:54.19. However, with swimmers ranked above her potentially choosing to not swim the event, there is still a chance that she could qualify for championships this season.

When will the cut-lines come out?

My goodness, the women’s 200 back got way faster. Any other events with such a significant time drop to make the cut?

i’m sure they will do a comparison but remember last year was unusually slow with the COVID complications; i would expect the cut time to be faster across the board

Loketev’s time that ranks him 31st this year would have been 17th last year pre-NCAA.

I don’t get why he swam this. you think he was working on his 100 pacing?

Have to assume it was part of training