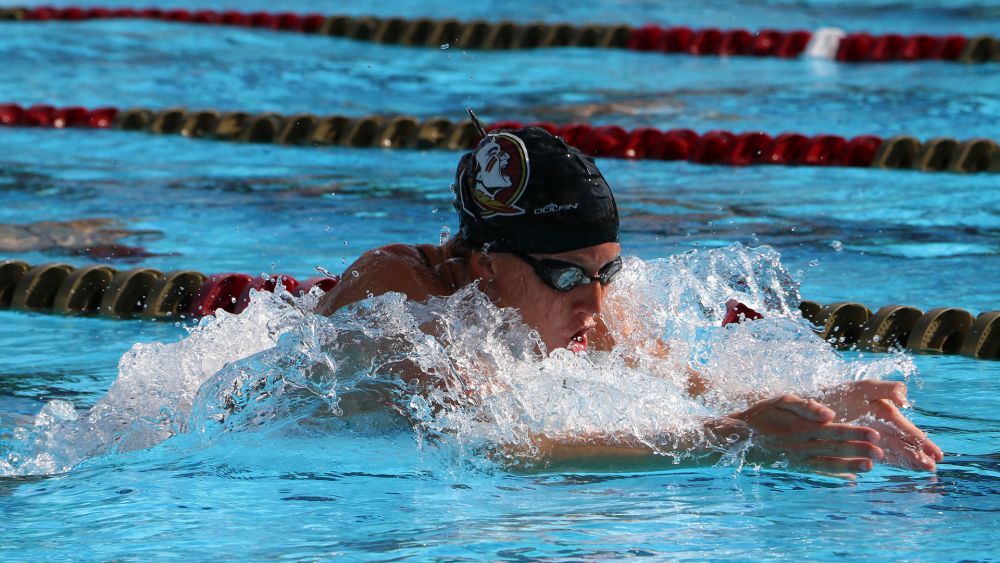 Though the temperatures started very cold in Tallahassee on Thursday, they did not hinder hosts Florida State University from defending their home turf against visitors University of the Incarnate Word. Stock photo via Florida State Athletics

Though the temperatures started very cold in Tallahassee on Thursday, the day’s low was 33 degrees, a cold snap in an outdoor pool did not hinder hosts Florida State University from defending their home turf against visitors University of the Incarnate Word.

The Seminole women and men dominated meet, each winning 11 of the 13 events contested in Tallahassee. As this was a “sprint” competition, no 200s of stroke nor the 400 IM nor 4 x 100 medley nor freestyle relays were contested.

Though she never swam her primary event, the 100 backstroke, Maddy Cohen of Florida State still unleashed a 25.88 to lead off FSU’s 200 medley relay at the outset of the meet, coming within a half-a-second of her best 2018 relay split in the 50 back from the Georgia Tech Invite in December.

Despite missing most of fall training due to a back injury, Hailey Ladd rallied a 5:04.98 in the 500 free, winning comfortably with a 4-second margin over exhibitioned teammate Maggie Emary. Ladd also won the 200 free in a 1:53.92, leading to a Seminole sweep of the top three finishes. To close out the meet, Ladd led off FSU’s ‘C’ 200 free relay, where she split a 25.18.

FSU’s Jackson Seith ran away with the victory in the men’s 100 breaststroke, where he touched in a 56.79, less than 2 seconds off his best of 54.97 from the 2018 Georgia Tech Fall Invitational. Seith may be in store for a great time drop in February, as he posted a 1:03.92 in the long course version of the 100 breast last summer, which converts to a 54.27 in yards, though there is no reason to doubt that is the limit.

While most Florida State Swimmers were relegated to their “off-events,” FSU and UIW divers were, as usual, left to their regular itinerary, which resulted in, due to an unseasonable cold front, some divers having ” icicles hanging off their noses,” per FSU Diving Coach John Proctor. Ultimately, Florida State claimed both women’s 1-meter and three-meter, courtesy of Maddy Carlson, and men’s one-meter, by way of Joshua Davis, and three-meter, by way of Aidan Faminoff.

Florida State closed out the meet with a pair of victories in the 200 freestyle relay. The fastest split on the women’s side came from Florida State’s Kertu Alnek, who anchored in a 23.14. For the men, the fastest split came from Florida State’s John Vann, who, despite swimming 2nd on the Seminoles’ ‘B’ relay, which was exhibitioned, posted a 20.22. In fact, the FSU ‘B’ squad won the event, posting a 1:22.19, easily ahead of their ‘A’ team counterparts, who “won” the race in 1:23.07.

TALLAHASSEE, Fla. –  The Florida State swimming and diving teams secured a pair of wins on Thursday over Incarnate Word at the Morcom Aquatics Center.

Both teams accounted for 11-of-13 event wins on the day.

“It was great getting back to racing,” FSU head coach Neal Studd said. “We had kids swimming in their third and fourth events and we had some others step up and win races. It was a lot of fun.”

Despite temperatures in the 40’s at the start of the meet, the divers swept three of the four events competed.

“We dove really well today considering our kids had icicles hanging off their noses,” FSU head diving coach John Proctor said. “They didn’t let the cold weather get to them and they went out there and really did well.”

In the swimming portion of the meet, the Seminoles got out to a great start by finishing first, second and third in the women’s 200 medley relay with the top team swimming a time of 1:43.54.

Senior Shelly Drozda led the 100 free from wire-to-wire, touching with a time of 52.34 followed by junior Paige Schendelaar-Kemp (53.88) in third.

The men also swept the 200 medley relay as the team of junior Griffin Alaniz, freshman Izaak Bastian, junior Vladimir Stefanik and senior John Vann turned in the top time of 1:31.32.

Working from the outside lane, Stefanik held off two Cardinals to take the 200 free win with a time of 1:40.91.

Sophomore Gavin Jones also won from lane one, touching with a time of 21.31 in the 50 free, with his classmate Oszkar Lavotha following in second at 21.50.

“I thought we competed very well today,” Studd said. “But we’re not finished this weekend. We’ve got a very tough test ahead of us on the road and we’re looking forward to the challenge.”

From University of Incarnate World

TALLAHASSEE, Fla– The University of the Incarnate Word men and women’s swimming and diving teams fell, 293-176, to Florida State University on Thursday at the Morcom Aquatic Center. This was the second of three away meets in this week’s schedule for the Cardinals, and UIW gained valuable experience against the Seminoles squads.

Hannah Rowley has been grinding this season in distance work and held tough with the Seminoles in the women’s 1,000 Freestyle, taking third in the heat with a time of 10:36.07. Rowley later snagged second in the women’s 500 Freestyle with a time of 5:14.08. Peyton Roemer and Kara Neel came in right behind Rowley for the event, finishing in respective times of 5:16.76 and 5:24.35. Also showing out for the Cardinals in distance events, Oscar Cardenas Reyes touched second in the men’s 1,000, finishing in a strong time of 9:50.63. In the men’s 500 Freestyle, it was Hector Ruvalcaba Cruz who owned first place with a quick time of 4:34.66. Cardenas Reyes came in behind to take second with a time of 4:46.17.

Roemer continued on in the meet day to claim second in the women’s 200 IM, coming back with a fiery last split of the race to finish in 2:12.82. H. Ruvalcaba Cruz soared in the men’s 200 IM, taking an easy first place standing with a finals time of 1:51.11.

Freshman Hailey Miller took fourth place in the women’s 200 Freestyle, finishing just out of podium territory with a time of 1:56.14. On the men’s side, Beau Fusilier took top ranks, finishing the 200 with a finals time of 1:41.44, only to be followed closely behind by teammate Leonardo Sanchez in third, going 1:41.53. Sanchez held his own and narrowly was edged out in the men’s 100 Freestyle to place second with a finals time of 46.67. C. Wallace came in right after to place third in 46.97.

Cardinals women topped the competition in the 50 Freestyle finals, with Brawner soaring to take first with a finishing time of 24.65. Zlata Demchenko took second close behind to finish in a time of 24.77. Demchenko later went on to finish second in the women’s 100 Freestyle with a time of 54.37. The men’s 50 Freestyle saw Christopher Lestage take third for the Cardinals behind Florida State swimmers, finishing in a finals time of 21.62.

Cardinals-standout Cassandra Phillips took first in the women’s 100 Butterfly, and cut time from her listed seed time, to finish in 56.54. The men’s top finisher for the 100 Butterfly was Bryce Kuchan, who came out with a time of 50.84.

Backstroker Natasha Fung fought in the women’s 100 Backstroke event, placing second in the competition with a time of 59.20. Miller and Devon Dockery finished after their teammate, coming in at 1:00.44 and 1:055.63, respectively. On the men’s side, Moran also took second for the Cardinals, finishing in 51.79.

In Thursday’s diving schedule, the Cardinals saw Ana Lucia Garza take fifth in women’s 1M diving to earn 205.43 points, while Dawson Martinez racked up 284.10 points on 1M for the men. Lucia Garza again took fifth in 3M competition with 232.43 points, but it was Timothy Newton who topped UIW’s roster for the men on the scoreboard, finishing with 271.20 points.

The day concluded at the Marcom Aquatic Center with the men’s and women’s 200 Freestyle relay. The women’s squad of Phillips, Brawner, Demchenko and Magda Vega Vidal took second in the event with a time of 1:39.04. For the men, UIW also took second, with Sanchez, Christopher Lestage, Fusilier and Moran coming in at 1:26.17.

UP NEXT
The Cardinal men’s and women’s teams return to Louisiana to face the Tigers of Louisiana State University on Jan. 12. Start time for the meet is TBD.