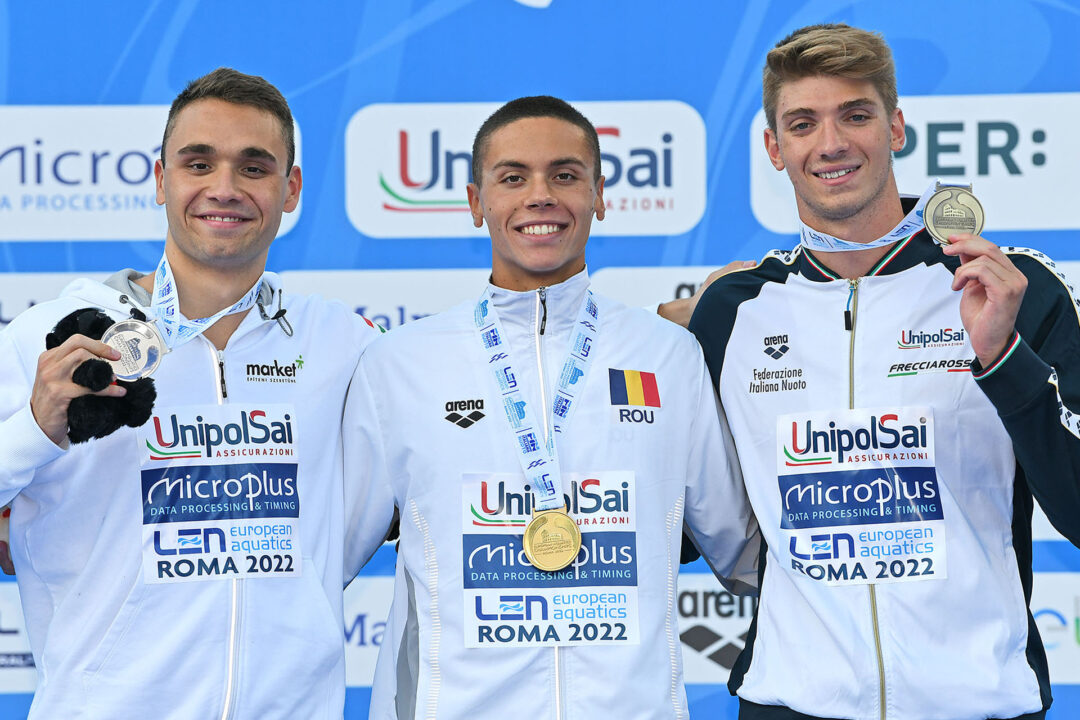 Kristof Milak, David Popovici and the Italian contingent were the top performers of the 2022 European Championships on the men's side. Current photo via Fabio Cetti

With the pool swimming portion of the 2022 European Aquatics Championships coming to a close on Wednesday, it’s time to hand out some hardware to the top performers from what was an exciting seven days of action at the Foro Italico in Rome.

Below, find SwimSwam’s official awards for the men’s competition:

The award for best male swimmer of the meet was not a slam-dunk for David Popovici, despite his otherworldly performances in the men’s 100 and 200 freestyle. However, the quality of his swims inches him past some of the other contenders who put up more medals and raced more frequently.

Popovici had a meet to remember in Rome, setting the pool on fire a few different times. The 17-year-old first broke the 47-second barrier in the semi-finals of the 100 free, clocking 46.98 for a new European Record, and then downed a 13-year-old world record in the final, producing a time of 46.86.

That swim broke Cesar Cielo‘s longstanding mark of 46.91, set at the 2009 World Championships, which also happened to be in the same pool as Popovici’s swim.

If that wasn’t enough, the Romanian dropped another all-time performance in the 200 free final, recording a time of 1:42.97 for the fastest textile swim in history, overtaking France’s Yannick Agnel (1:43.14). Popovici now ranks third on the all-time performers’ list, trailing suited efforts from Paul Biedermann (1:42.00) and Michael Phelps (1:42.96).

For good measure, Popovici also put up a time of 47.20 in the prelims of the 100 free, which briefly broke the championship record, and he added a 47.85 performance leading off Romania’s 400 free relay, giving him 14 sub-48 swims in young career.

Popovici also cruised to a 1:44.91 semi-final swim in the 200 free, giving him five sub-1:45s, and he established a new personal best of 3:47.99 in the 400 free heats before scratching the final to begin preparing for World Juniors.

A great stat coming out of Popovici’s performances in Rome: coming into the meet, there had been a combined total of six swims in history either sub-47 in the 100 free or sub-1:43 in the 200 free. After he was done competing, that total is now up to nine. At 17, Popovici is the first swimmer to have broken both the 47 and 1:43 barriers, and he’s also the only athlete to dip under 47 seconds twice.

Although the medal count wasn’t quite what it was for his competitors, the sheer quality of Popovici’s swims earn him Male Swimmer of the Meet.

A lot has already been written about this swim, so we don’t need to get too deep here, but Popovici’s performance in the 100 free was monumental and clearly comes out as the swim of the meet.

The world records set in 2009 have slowly been chipped away at over the years, but there are still a number of them on the books. Cielo’s 46.91 mark was one that seemed like it was inevitably going to fall from either Caeleb Dressel or Kyle Chalmers in the last few years, but neither has been quite able to get their hands on it.

Popovici finally got it done last Saturday, flipping in 22.74 at the 50 before storming home in 24.12 to put up a time of 46.86. In the semis, his back-half split of 24.05 marked the fastest in history. In addition to breaking the suited world record by five one-hundredths, he also takes a tenth off of the fastest time ever recorded in a textile suit, which is Dressel’s 46.96 from 2019.

NATION OF THE MEET: ITALY

The Italian men won a whopping 20 medals across 20 events, including eight gold. Thomas Ceccon and Nicolo Martinenghi led the way with two individual titles apiece, and Gregorio Paltrinieri and Alberto Razzetti also won one gold and one individual silver medal.

Italy also steamrolled to decisive victories in the men’s 4×100 free and 4×100 medley relays, and despite falling to the Hungarians, put forth a strong effort to place second in the 4×200 free.

Leonardo Deplano, Alessandro Miressi, Lorenzo Galossi, Simone Cerasuolo, Federico Poggio, Luca Pizzini and Pier Andrea Matteazzi also made their way onto the podium during the competition, giving the Italian men 11 different individual medalists. There were only four events on the men’s program in which Italy didn’t win at least one medal.

Note that we have excluded David Popovici from being eligible to win this award since he won overall swimmer of the meet.

Portugal’s Diogo Ribeiro quietly had a very good showing in Rome, highlighted by his bronze medal victory in the men’s 50 butterfly.

The 17-year-old lowered his Portuguese National Record in each round of the event, culminating with a time of 23.07 in the final to take down established names such as Nyls Korstanje (top seed out of semis), Andrii Govorov (world record holder) and Szebasztian Szabo (defending champion).

His swim also fell just two one-hundredths shy of the World Junior Record, with Russia’s Andrei Minakov having set the mark of 23.05 back in October 2020.

Ribeiro also made the final of the 100 fly, setting a new National Record and breaking 52 seconds for the first time in the semis in 51.61.

There were no obvious breakout swimmers for the men in Rome, as the majority of the top performers were previously-established names who had already done plenty of damage on the international scene.

The one name that stood out as a breakout swimmer of sorts is France’s Yohann Ndoye Brouard, who won his first major international title in the men’s 200 backstroke and added an individual bronze in the 100 back.

Last year, Ndoye Brouard appeared to be in good enough form to make the Olympic final of the 100 back, but in the semis he missed the flags and crashed into the wall, later revealing it was due to a degenerative eye problem. Later in the Games, he led off the French medley relay in 52.77, more than four-tenths under what it took to make the individual 100 back final.

It appeared as though bad luck had struck the 21-year-old again in Rome, as a faulty backstroke wedge in the 200 back semis meant he had to re-swim the event on his own at the end of the session. He did so seamlessly, posting the second-fastest time overall, and then went on to win the final in a new French Record of 1:55.62.

It’s a bit of a stretch to call this a ‘breakout’ meet for Ndoye Brouard—he was fourth in the 100 back at the World Championships in June—but in the end, he fulfilled some of the potential he’s shown for the last couple of years and came away with some major hardware for the first time.

Milak is the real winner, and male athlete of the meet.

I think it’s always interesting with these lists- should athletes be judged against their own past times or just against the competition?

But yeah give Popovici the performer of the meet…

Swim of the meet was kinda obvious, but not the swimmer of the meet. That’s totally subjective, I was leaning towards Milak, but Popovici is worthy as well. Ceccon and Martinenghi did an amazing job too.
Swimmer of the year will be another story though.

Milak promised at his closing press gathering exiting new things at next years Hungarian Nationals, without telling what – no need to give my opponents an advantage, as he formulated it.

Yeah, he was saying: “There are a couple of things in the pipeline that I haven’t shown much of yet, but I think there will be a huge suprise at the national championships early next year”.

The most suprising for me would be medley for sure. We already know that he has an exceptional fly and free and a pretty solid backstroke as well. However his breaststroke is known for being not so good to put it mildly. 😀 Although there’s no proof of that as nobody has ever saw him doing breaststroke, so who knows.

Hope he sticks to 1/2 fly & free. Not everyone needs to be MP

Thanks to nonsense olympics schedule, he can swim the 200 medley, and not the 100 free.

2IM final and 1fly semi are back to back.

How did Paris make the schedule even worse with an additional day?

For the boys, but not Ledecky and Titmus, etc.

JUST THE USUAL. EVERYTHING IS ABOUT THEM…

He has a good backstroke as well, but havent swum 200 back in nearly 4 years at a competition. But without Rylov or an american in the 1:53 category, that field is quite wide open.

Skinny Legend moment: You have to be excluded from an award because you already won too many