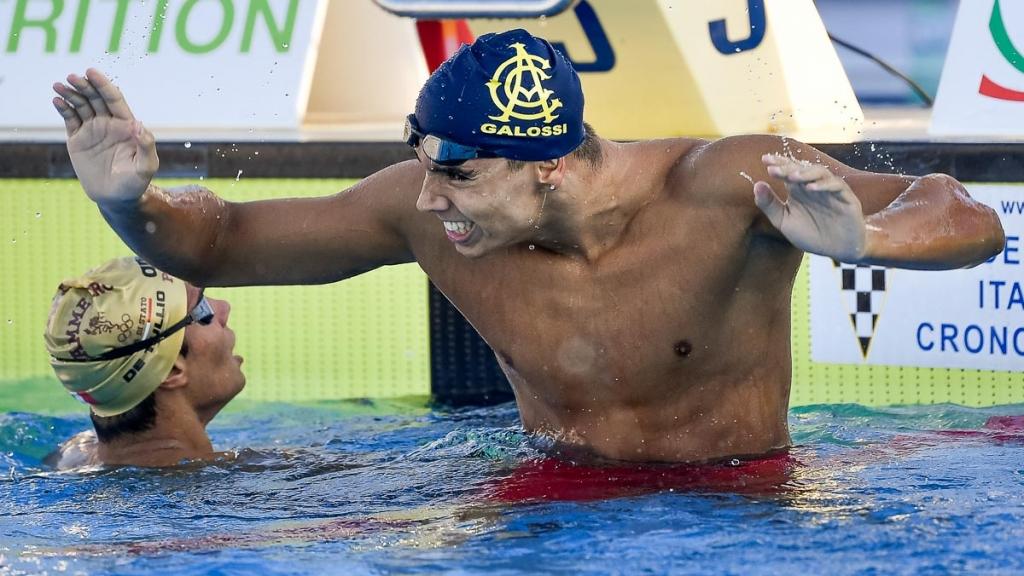 Lorenzo Galossi negative split his way to a 7:43.37, surging to a spot on the podium while taking 2.3 seconds off the previous World Junior Record.  Archive photo via courtesy of Andrea Staccioli/Deepbluemedia

Italian distance freestyler Gregorio Paltrinieri stole the show in the 800-meter final with his Championships Record time of 7:40.86, but perhaps even more impressive was the bronze-medal swim by 16-year-old countryman Lorenzo Galossi that shattered a long-standing World Junior Record.

Galossi negative split his way to a 7:43.37, surging to a spot on the podium while taking 2.3 seconds off the previous World Junior Record set by Australia’s Mack Horton back in 2013.

“I’m in shock, it was an incredible race — something we’ve been preparing a lot for,” Galossi said. “I’m very happy with the time as I set a new junior world record and that’s amazing.”

Galossi sat back in sixth place for the first half of the race, making his move to fourth after the 400-meter mark and surpassing Ukraine’s Mykhailo Romanchuk with a few lengths to go. Galossi’s blistering 27.90 split on the final lap was nearly enough to catch silver medalist Lukas Martens on the home stretch, but the German held off the late surge by less than a second.

Galossi’s new personal best marks an improvement of nearly three seconds from his previous standard of 7:46.28 posted at last month’s Italian Summer Championship. That time was a huge drop, too, shaving more than three seconds off his previous best from April. It’s difficult to project future trajectories, but Galossi is gaining ground on Paltrinieri in a hurry.

Splits comparison, front half vs. back half

Galossi’s previous best was also a negative split. Most of his improvement came from a quicker front end, but he still had enough energy left in the tank to take time off the back half as well.

Here’s how Galossi’s splits stack up against Horton’s previous World Junior Record performance. Notably, Horton took the race out faster in the first half, but Galossi’s back-half speed appears unmatched.

The future is bright for Galossi, who is fresh off victories in the 400 and 800 free at Euro Juniors last month. At just 16 years old, Galossi is already among the top-20 fastest performers of all-time in the 800 free and ranks sixth in the world this year. It’s only up from here.

Ledecky was supposed to inspire a new generation of female distance swimmers. Instead there’s nothing on that side while the men’s races are always interesting with new talent all over the place.

Well,Titus, McIntosh, Grimes are younger (9 – 10 years in two of them) and they’re not bad distance swimmers.

With the girls at Sandpipers doing so well and being at the prime age to be influenced by Ledecky I beg to differ. Plus I think Ledecky and her dominance means that even if she does inspire new swimmers they might not surpass her skill and won’t be writing equivalent headlines to what is going on with the males.

“nothing on that side”??

Titmus is inspired by Ledecky, broke 400 WR and becoming second fastest ever in 200 and 800.

McIntosh is only 15 yo and already swam sub 4 minutes twice.

He did take a medal it seems.. Amazing result for him! Him and David are the future on the men’s side at this Euro’s.

I mean I’ve been following him since he started to break national age group record in July-August 2020 and I was impressed by his improvements month by month but I’ve never ever expected three weeks ago he would have gone 7:43. I really dunno what to say rather than wishing him to keep up the good work

Galossi is just a fabulous swimmer, no doubt about it.
I can see from the LEN European Championships that Paris 2024 is already shaping up to be GLORIOUS!

In 2024 he’ll still be a junior, I’m curious about how unbeatable his WJR might look by then..

in the shadow of popovici but this swim was incredibly insane, a 16 year old, junior in high school, went 7:43, mindblowing