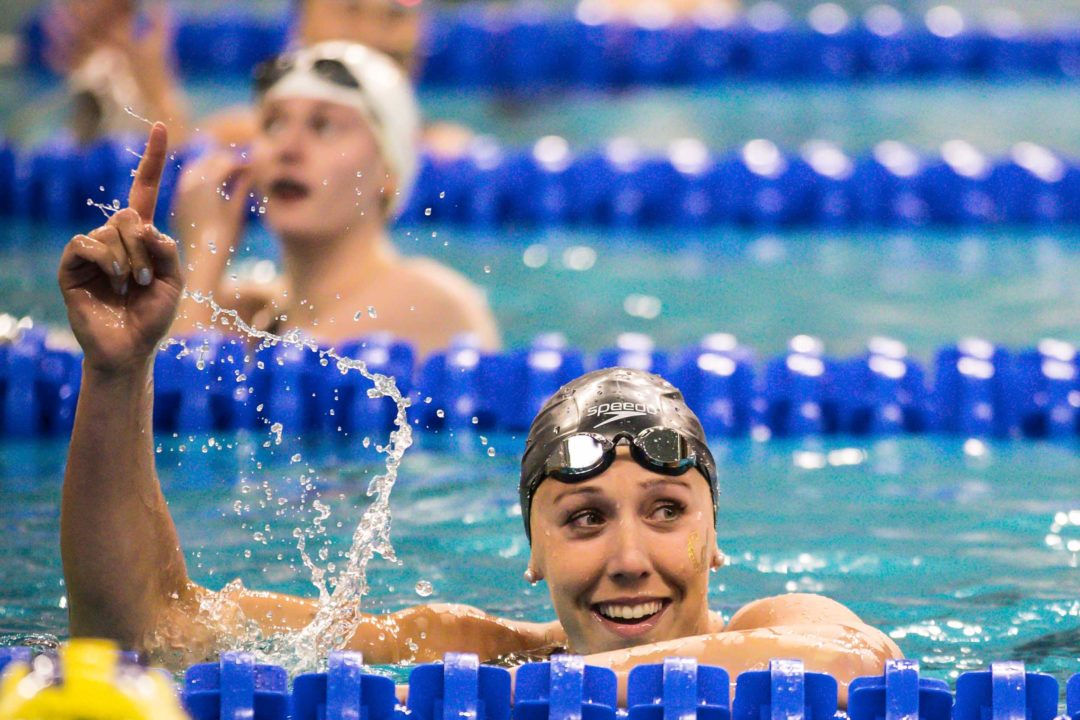 Almost half of voters picked Abbey Weitzeil as the top NCAA-to-ISL newcomer this year. She hasn't yet publicly signed with an ISL franchise. Archive photo via Jack Spitser/Spitser Photography

Almost half of voters picked Maxime Rooney in our poll picking the top NCAA-to-ISL man, edging out the 38.6% picking Coleman Stewart.

Rockvale High School coach Tyler Montgomery gives his humorous take on the swimming that goes on in “Pretty Little Liars”.

It was the narrowest of margins, with just 3 votes separating predictions of either Katie Ledecky or Gregorio Paltrinieri 1500 free world records next summer.

Two-thirds of voters favored in-person meets (albeit with no spectators) compared to ‘virtual’ meets for high schools this fall.

Our most recent poll asked SwimSwam readers to pick the most impactful newcomer to the ISL in 2020 from the NCAA:

Question: Who will be the most valuable newcomer to the ISL in 2020?

Almost half of voters picked Abbey Weitzeil as the top NCAA-to-ISL newcomer this year. Weitzeil has yet to publicly sign with an International Swimming League franchise.

California grad Weitzeil was also at the top of our list of NCAA-to-ISL talents in the spring. She makes the most of several key advantages.

First, the ISL values sprint freestylers immensely – arguably even more so than the sprint-focused NCAA. With no event limits, a good 100 freestyler can have an impact on every single relay (4×100 medley, 4×100 free, mixed 4×100 free), each worth double points in the ISL. The triple-point skin races also give incredible value to 50 freestylers with the endurance to swim up to the 200. That includes Weitzeil, who was seeded 1st for 2020 NCAAs in both the 50 free and 200 free, albeit in short course yards.

Second, Weitzeil’s versatility gives her value even as the skin races expand to feature non-free strokes. Weitzeil has previously filled in as a sprint breaststroker on relays for Cal, and is also a strong sprint flyer.

Third, already carrying two Olympic medals, Weitzeil is an extremely marketable name – something that can’t be overstated in a league still trying to find its footing in a crowded professional sports environment.

Fourth, Weitzeil has incredible momentum, coming off of the first-ever 20-point swim in the 50-yard free during this COVID-shortened college season.

And finally, Weitzeil also takes advantage of a set of events (sprint free) where the reigning World and Olympic champ is not competing in the ISL – Simone Manuel did not compete in the ISL last year and hasn’t publicly signed with any team this year. The sprint freestyles are still deep with a lot of top European and Australian talents. But not having Manuel in the mix certainly opens up the field more.

Hitting many of those same key notes is Erika Brown, the versatile and speedy Tennessee Volunteer alumnus. Brown is definitely more of a butterfly pickup than Weitzeil, and the two aren’t far apart in sprint free. Brown signed with the Cali Condors last month. She got about 37.9% of votes in our poll.

Beata Nelson also signed with the Condors. She’s perhaps underrated in our poll at 16%. A butterfly/backstroke standout and the Swimmer of the Year in the NCAA in 2019, Nelson will probably gain some value when we get more clarity on how the non-free skin races will go. Nelson should be an absolute monster in both the 50 fly and 50 back, which makes her a major skin race weapon. Nelson is also probably undervalued as a free relay member. Though she’s not Weitzeil/Brown level, Nelson did split 46.9 on a 400-yard free relay at Big Tens this spring.

Nelson’s events are tougher, though, in the already-existing ISL fields. Arguably the most impressive swimmer of last ISL season was London Roar backstroker Minna Atherton, who set the 100 back world record in ISL competition last year. Former long course world record-holders Kathleen Baker and Kylie Masse should also be in the mix, along with Emily Seebohm and Olivia Smoliga. The only reprieve is that breakout star Regan Smith is not expected to compete in the ISL as she maintains her college eligibility.

One wrinkle to watch for in these rankings, though: Weitzeil could follow in the footsteps of fellow California-based top American sprinter Manuel, who did not compete in the ISL last year.

Below, vote in our new A3 Performance Poll, which asks voters the same question about the men’s ISL newcomers:

I think Abbey is highly talented and might be a better long course swimmer but for SCM I’d have to go with Erika Brown here. Her underwaters are are some of the best I’ve ever seen and will be great competitor for 50-100 of free, back and fly. Too bad we never got to see her swim at NCAAs this year.

I agree. Erika Brown had a huge breakout year. She would’ve crushed NCAA’s. She will translate well to SCM.

8
-1
Reply
iLikePsych
Reply to  Don’t get me wrong

Erika Brown is such an exciting prospect for the Condors because she can swim up to the 200, which is almost necessary to have any shot at winning Skins races. Women’s Skins are exactly where they struggled last year.

Internationally, someone needs to sign Michelle Coleman (SWE). She was swimming close to her PBs in the FINA Champions Series pre-pandemic and can swim from the 50 to the 200 and backstroke races in a pinch. She has short course PBs of 23.9/51.9/1:53.5, and a 56.5 in backstroke.