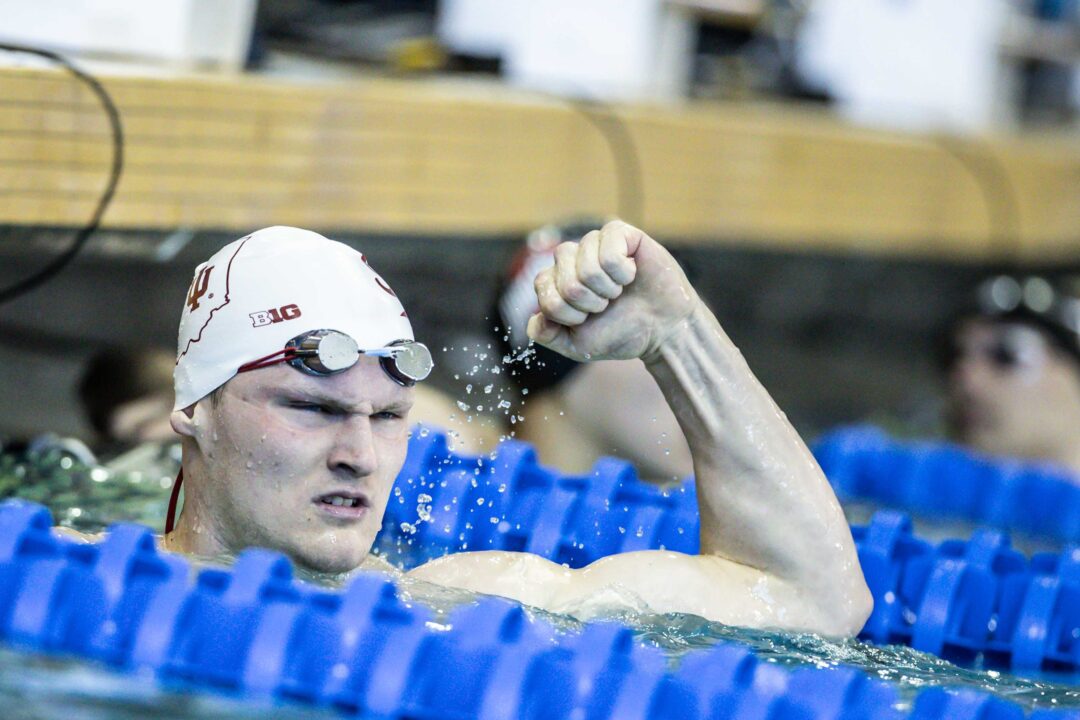 94% of people picked Nicolas Albiero or Luca Urlando to win, but Brendan Burns emerged as the upset victory in the men's 200 fly at the NCAA Championships. Archive photo via Jack Spitser/Spitser Photography

Our most recent poll asked SwimSwam readers which race had the biggest upset champion over the two NCAA meets:

Question: What was the biggest upset of the NCAA Championship meets? (Individual events)

There was no shortage of good options for this poll, as several surprise swimmers emerged as NCAA champions in March.

Although Burns came in seeded fifth, putting him in the mix for a top finish, hardly anyone was picking him to win, as Albiero, the defending champion, received more than 84 percent of the first-place selections in the SwimSwam Pick ‘Em Contest.

Urlando received 10 percent of the picks, while Julian also got his fair share. So while Albiero was the clear favorite, a win from Urlando or Julian wouldn’t have deemed an upset. But a Burns win was something no one saw coming, as reflected in these poll results.

A close second in the poll was the men’s 400 IM, where Hugo Gonzalez stunned everyone by upsetting Leon Marchand and Carson Foster for the victory. Marchand (49.4%) and Foster (47.2%) combined to garner over 96 percent of the winner picks in the pick ’em contest, with Gonzalez earning a handful.

The surprise of Gonzalez’s victory was probably only enhanced after Marchand broke Caeleb Dressel‘s all-time record in the 200 IM the day prior.

Maggie MacNeil was a huge favorite in the women’s 100 fly after setting the all-time record last year, while Stanford’s Torri Huske was also a popular pick to win. MacNeil (70.6%) and Huske (24%) combined for nearly 95 percent of the winner picks, but it was Kate Douglass coming out on top after a flawless meet. Douglass’ win in this event received more than 12 percent of votes.

Katharine Berkoff was on fire all season, but many were still surprised to see her take down Regan Smith in the women’s 100 back, also taking her American Record for good measure. 86.5 percent of pick ’em entries selected Smith to win.

Kaitlyn Dobler getting by Sophie Hansson and Alexis Wenger was also an unexpected outcome in the women’s 100 breast, as was Marchand roaring home to dethrone Max McHugh in the men’s 200 breast.

More than 95 percent of pick ’em entries selected either Hansson or Wenger to win the women’s 100 breast, while 94 percent picked either McHugh, Matt Fallon or Reece Whitley to claim the men’s 200 breast.

Below, vote in our new A3 Performance Poll, which asks: Who will be the top American woman in the 100 freestyle (LC) this year:

KD performances were biggest news of all NCAA’s

that was awesome but not biggest upset