Swimming’s TopTenTweets of the Week: #9 Lochte Very Good at Selfies 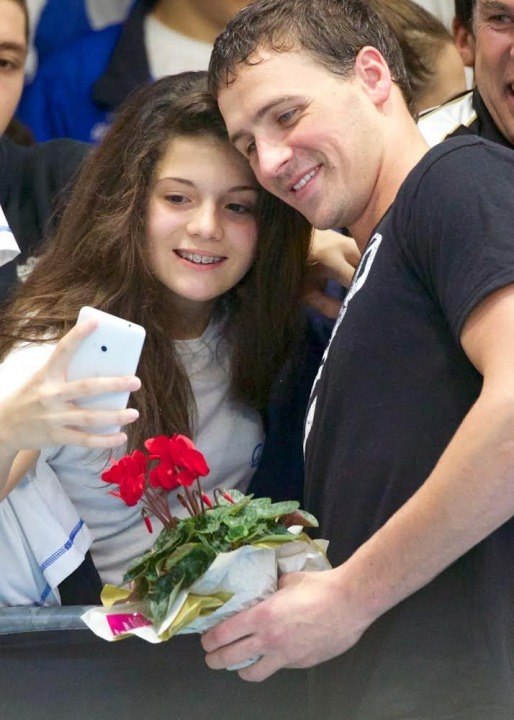 Ryan Lochte is no stranger to selfies! Archive photo via Rafael Domeyko, rafaeldomeyko.com)

Blending in with the locals. pic.twitter.com/HzziPyI8MV

Alex!! Not sure if that’s a shark, an eel, or some other sea creature, but I definitely wouldn’t go this close to it if I were him. The 2012 Olympian is scheduled to compete in the 5K as well as the 25K races at the 2015 Kazan World Championships, where he just might encounter some more of these beasts.

An unsolicited visit from @RyanLochte in Greensboro at Age Group Champs… Getting to know his @swimmacc teammates pic.twitter.com/cDAgR60YGE

Nowadays, it seems like selfies are the new autographs, and SwimMac Elite’s Ryan Lochte came down from the big leagues to hang with some of the SwimMac age group swimmers. Nice photobomb, girls in the back!

Whatever works, works… Natalie Coughlin might not have had a grand luxury ice bath, but she secured her 60th international medal at Pan Ams and rocketed up to the third fastest time in the world in the 100 back with a 59.05 to lead off the U.S. women’s gold medal-winning 4×100 medley relay. It’s the fastest she’s been since 2011 and nearly a lifetime best.

Not sure if any other female swimmer has brought THIS much funk to her race before downing a meet record as well as a personal best. North Baltimore Aquatic Club’s Sierra Schmidt seriously jammed out before her 800 free final at the Pan Am Games, and then dove in and was leading by over two and a half seconds just 200 meters into the race. She won gold and notched a new best time of 8:27.54. Click here for more of Schmidt dancing (we know you want to).

Brazil’s Thiago Pereira became the most decorated Pan Am Games athlete after picking up his 23rd medal with Brazil’s 4×100 medley relay golden performance.

Distance swimmers rely on lap counters to keep track of where they are in their long races, but sometimes it’s nice to have another friend making sure you know exactly where you’re going!

I try to stand for an hour a day. Usually I know when time is up because I look down and see this.… https://t.co/d0WbESIfrI

CUTE DOG ALERT! Click on Amy’s Instagram link in her tweet to see her adorable pup. It’s even better to see that the six-time Olympic gold medalist back on her feet after an ATV accident last summer severed her spinal cord.

Wish more than anything I could have been at the ESPY's tonight. This is what was happening instead!?? Broken car! pic.twitter.com/yonQRlHVxq

Missy Franklin might have preferred to be in LA accepting her ESPY Award for the Best Female College Athlete rather than having her car get towed in Denver, but the swimming fan in me is just glad she’s at home training with the Colorado Stars in preparation for the 2015 Kazan World Championships.

This swimmer realizing he has won gold may be GIF of the year http://t.co/41VZZ94AdF pic.twitter.com/FZrvjDtKat

Brazil’s Leonardo De Deus won the men’s 200 fly on night one of the Pan American Games in Toronto, and his reaction was priceless… His time of 1:55.01 also took down a Games record.

The greatest comeback of all time pic.twitter.com/EGjCcENrxU

Just a reminder of this legendary relay. Easily the best race I have ever watched in my entire life. So much heart was put into this, and Jason Lezak did what nobody thought he could do. Go USA!

It’s a catfish. Not sure what species. Love the sign “Go That Way”, that’s great.

What is Nat icing? hamstrings? feet? Usually athletes ice something that is injured or sore…just wandering?….

That song made for a kinda corny video, but hell if I still didn’t get goosebumps when Lezak touched the wall.

(Coincidentally a solid song from a great band.)