Most valuable piece of information you’ve learned from coaching? "Managing an athlete’s brain is just as important as managing their seasonal plan." 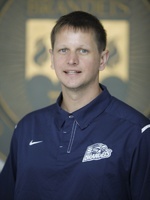 In this edition of Swim Coach Confidential, I spoke to Mike Kotch, head coach of Brandeis University. Located just outside of Boston, Brandeis is a private Division III program that competes in the University Athletic Association. In just his third year as head coach, Mike Kotch has gradually established his team as one of the top swimming programs in New England. Coach Kotch has led the Judges to multiple top-eight finishes in the UAA, NCAA B-cuts, and numerous school records. In addition to achievements in the pool, Kotch’s teams have also been honored as CSCAA Scholar All Americans; an award given to programs that earn at least a 3.0 GPA.

Coach Kotch spent his collegiate career as a competitor for Bentley University, where he graduated in 1998. Upon graduation he remained at Bentley to pursue an MBA in addition to serving as the team’s assistant coach until 2008. His last stop before taking the helm at Brandeis was at Regis College, where he served as the Head Coach until 2011. Coach Kotch looks to further his proven track record of cultivating teams that demonstrate not only high-level swimming but also stellar academics.

Check out what Coach Mike Kotch of Brandeis University had to offer us for latest Swim Coach Confidential:

The Swim Coaching Bible, Volume 2. I read it just about every season. I also check in with SprintSalo every now and again for ideas.

Time-management and communication, without a doubt in my mind.

At the conference meet concluding my first season as a head coach, each graduating swimmer from the team I left the season before sought me out during the senior ceremony to thank me for the time I spent working with them. It really opened my eyes to the impact I was making with student-athletes, and to not take their experiences for granted.

When I started out as an assistant, I would have said “anything that turned their backs red” (it’s funny how quickly you forget what it’s like to be in the water!). Now I would say: any set that helps us “get better” given where we are during a particular point in the season.

Specifically, the nitro whistle set always impresses me because the team really gets into it and always exceeds my expectations. I also enjoy some sort of 5-4-3-2-1. Take a 400 split in the 500 and the next 400 has to be faster than that split…so on down the line.

I coached two twins on a club team that I was later recruiting to Brandeis. I couldn’t tell them apart to save my life and they knew it! Fortunately or unfortunately, one came to Brandeis so now it’s only embarrassing when her sister visits campus.

Managing an athlete’s brain is just as important as managing their seasonal plan. You have to be somewhat adaptable and also realize that the time spent studying and doing research is sometimes just as exhaustive as a workout.

I got involved because my older siblings did it and my parents figured it was easy to have all the kids doing the same activity at the same time. Baseball was always my passion. I remember vividly begging my parents to quit time and time again. In the end I think every swimmer understands when I say it was a love/hate relationship.

-As a parent myself now, I totally understand why my parents wanted their kids to be in one place at one time playing sports.

I started life after college in public accounting and my college coach called with a full-time coaching opportunity. At the time, I thoroughly enjoyed the client interactions accounting provided, but the work was the same day in and day out so that was really the opening I used to justify pursuing a “free” MBA. I soon realized that I loved the challenge of figuring out how or why a practice plan didn’t unfold the way it might have been intended. I think the most enjoyable part of my early coaching education was that my boss would take the time to explain more than the context of a workout. She was great about helping me tune in to personalities, body-types, backgrounds; the “feel” side of coaching, if you will.

Favorite/most useful drill you have your swimmers do?

I must admit I am not a big drill coach. The most effective tool that I use or have used is a camera system and mirrors. It is amazing how much quicker a college swimmer will make a correction when you allow them to see it for themselves. I guess they like to feel like they are in control of the change!

I tend to push the accountability down onto the swimmer when it comes to working on finding efficiency in the water. We rarely practice over two hours and I am always available for one-on-one time in this regard so I encourage the team to use that avenue. I certainly always provide feedback and instruction, but I guess you could say that my “threat” is that we can get better through grinding and tapering, or we can get better by working smarter followed by tapering.

I generally appreciate watching any of the seasoned veterans swim because the baseball side of me really likes observing routines, rituals, and pre-race preparation. I’m somewhat obsessed with figuring out how to help a kid figure out how to find confidence in and out of the pool.

Absolute special recognition needs to go out to my college coach and first swimming boss, Mary Kay Samko at Bentley. Coach Zotz (predecessor at Brandeis) has also been instrumental in helping me figure out Brandeis as a whole, and Jack Fabian at Keene State has been very helpful. I jokingly think Jack will only share with me until his son Max graduates this season. All in all, I am not ashamed to learn from anyone at any point in time because it is my job to put every swimmer in the position to maximize their potential.

I love being a dad to two girls currently aged 6 and 2. I also spend the entire off-season trying to find a way to make up for the fact that my wife runs an awesome ship at home by herself for about 6 months out of the year.

What has been the hardest you have ever laughed as a coach?

Not to harp on a fish out of water stereotype, but I coached one kid in my life that was not coordinated enough to do jumping jacks! (I certainly need to be clear that I laughed out of love, not out of trying to embarrass anyone.) We now have some great jumping jack traditions from season to season and this infamous jumping jacker comes back to visit every season and the team loves it!

Naturally it is replicating the unique jumping jacks that I mentioned earlier! If not that, I love a well done spider man crawl.

The ‘Deis Game of course!

Wesleyan was the site of my last college meet where I was fortunate enough to end my career with all lifetime bests. Now as a coach, any pool we happen to be practicing or competing in that day is our favorite. It’s an important mindset.

Team culture is always our number one priority because we are continually thinking about being the foundation for the next team whether it is 1, 2 or 10 years down the road. It makes every single member of the team important. I also don’t think desirable character traits and values change at all from year to year so I would say I know what we want to do culturally, and it certainly shouldn’t be a shock to anyone.
Every season the team has an opportunity to adjust and sign off on their team mission statement. Once their signatures go on that page it’s on them to make it real.

What has been your favorite “toy” to use with your swimmers during practice (useful or dud)?

I love the FINIS turnmasters but must admit I do not use them as much as I would like. Sarcastically speaking, I tend to think I am the only one that can get them in the water properly in under 60 minutes even though everyone on the team is unbelievably smart. Just goes to show that Brandeis needs to add an engineering program!

I got this in a fortune cookie right about the time I was offered the job at Brandeis. It’s taped on the bulletin board in my office and says “one person with a belief is equal to a force of ninety-nine who have only interest”.

What is the Nitro whistle set?