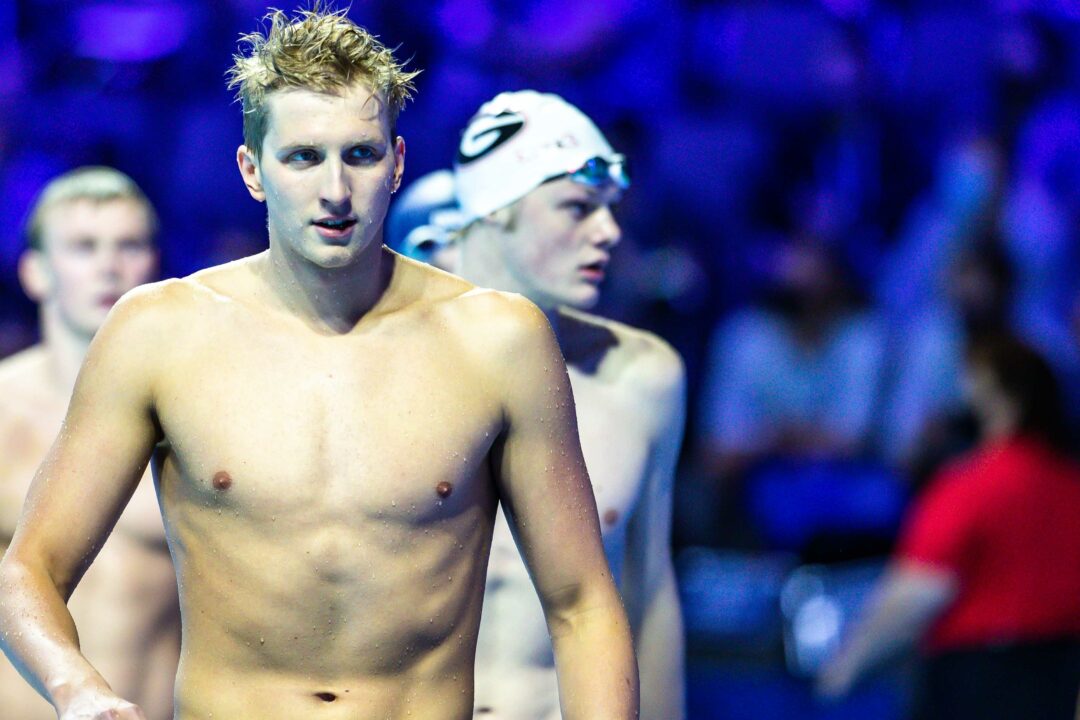 100 back champ Ryan Murphy spoke on the ups and downs of the last five years, while the top 4 men in the 200 free expressed optimism about the 4x200 relay. Current photo via Jack Spitser/Spitser Photography

Tonight’s 100 back champion Ryan Murphy, along with the top four men in the 200 free – Kieran Smith, Townley Haas, Drew Kibler, and Andrew Seliskar, spoke with the press after the conclusion of the session.

Murphy described the ups and downs he’s had since 2016, and how things like focusing on academics during the 2016-2017 school year, and an (assistant) coaching change at Cal disrupted his training a bit.

I guess after 2016, went back to college for my senior year, really put a big emphasis on the academic side, and in 2017, one of my big goals was to try to graduate with above a 3.5 and I was hovering at that line going into my senior year, so that was kind of my main goal after ’16.

I was pretty disappointed with the results that summer, so came back, really wanted to kind of prove to myself that I was still good at swimming, and that kind of propelled me to a good year in 2018.

2019 we had a little bit of a coaching change and tried out some new things in practice, and some of those were good, some of those weren’t good, and then the past two years it’s just been really dialed in trying to prepare for Tokyo.

Haas, Seliskar, and Kibler talked about how it feels goes from NCAA rivals to now being teammates on swimming’s biggest stage. Kibler said:

After the race, being able to give Seli here like a hug and a fist bump…after my freshman year, like just wanting nothing more than to beat him…so it was just fun just to be able to embrace him and we can both celebrate all of our great swims this evening. Yeah, definitely a fun change in perspective.

Additionally, the 200 free quartet expressed optimism about their 4×200 gold medal chances next month, with Kieran Smith running down everyone’s times and saying that the USA should be “all set” to contend. Of note, it will be an almost entirely new-look relay, with Haas the sole returner from last year’s 200 free final.

It looked like a three-man race at the 100, with Kieran Smith, Townley Haas and Zach Apple taking early command of the men’s 200 free final. On the third 50, however, Smith and Haas created some separation from the field, and then the stage was set for a wild battle on the last 50.

Smith edged in front down the stretch, getting his hand on the wall first in a time of 1:45.29, dropping almost a half-second from semi-final PB (1:45.74) to add a second individual event to his Olympic program after winning the 400 free on opening night.

Haas, who won this event at the 2016 Trials, came through in a big way after an up-and-down quad, touching in 1:45.66 for second—which actually ties his winning time from the 2016 final.

In the mad scramble for relay spots, Haas’ former Texas Longhorn teammate Drew Kibler held steady on the back-half, splitting a pair of 27.1s, to grab third place in a best time of 1:45.92. Kibler entered the meet having never broken 1:47.

Andrew Seliskar made a big rally on the third 50, putting himself into the mix with a 26.92 split, and then managed to hold Apple at bay to pick up fourth in 1:46.34.

Ryan Murphy held off an unbelievable late push from the upstart Hunter Armstrong to win his second straight Olympic Trials 100 backstroke title in a time of 52.33, adding just over a tenth to his season-best (52.22) from last night.

That swim from the semi-finals ranks Murphy second in the 2020-21 world rankings.

Armstrong, a 20-year-old out of Ohio State, surprised many when he popped off with a 52.67 swim in the semi-finals, and he went almost a full two-tenths quicker tonight to make the team (most likely) in the second spot.

Turning seventh at the 50 in 25.73, Armstrong turned on the jets coming back, marking the only swimmer in the field to close sub-27 in 26.78. That moved him past early leader Shaine Casas to snag the runner-up spot in 52.48, making him the fifth-fastest American of all-time.

Two of the men expected to challenge for the second spot coming into the meet, Justin Ress and 2012 Olympic champ Matt Grevers, finished fifth and sixth in 53.00 and 53.27, respectively.

Enjoyed getting to know Kibler a bit. Cool dude!

Going to be a tough hill to climb for the US, but also makes for an interesting final.

Yeah, it’s gonna take personal bests from all 4 to get into the medal picture I believe. It’s possible but if I’m putting money out on this event, I’d want at least 4-1 odds before I’d bet on them making the podium.

Drew Kibler is seriously the most articulate when answering the questions . He is at ease for a guy earning his first Olympic experience . Can Townley work on his dolphin kicks to go 1.43 again on the relay ? i am probably dreaming out loud here ….ha ha ha . Over the water , he showed serious speed on the 2d & 4th 50 . The can hopefully all work on shaving off a few tenths by the Time Tokyo rolls out …

I think it’s tighter than that. Based on tonight, the US look slightly quicker than the Russians and slightly slower than the Brits, but anything could happen (Dressel a big unknown factor still).

What’s surprising is the global depth, previously a GB team with two 1.44s would probably still struggle against a US team pumping out four straight 1.45s. Now the Brits and maybe Russia look like they’ve got the depth to rival the US.

I think it’ll take sub 7 mins to win or maybe even a WR. Smith and Haas must split 1:44

Every thing is unclear . . GB, AUs, Russia are looking strong . But Dressel may me key factor . Hass is un predictable If he got His form of 2018 many can be changed..

No way dressel should factor into this relay without ever going sub 1:46.

All set for a minor medal at best.

Loving Seliskar’s reaction to the NBC reporter asking Drew about his tattoos.

I shared the same feeling of “why is this being asked right now?” 🤣