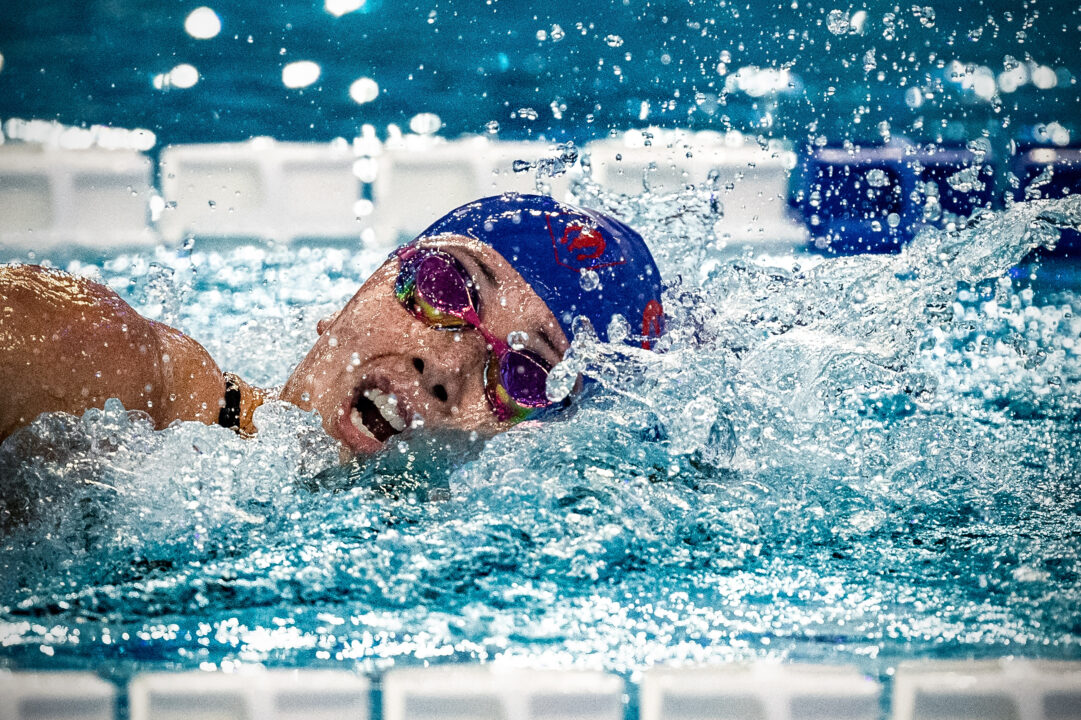 The top two finishers in the women’s 400 free both broke records on Thursday in Match #14 (Playoff #3) as part of a tight race to the wall.

The 3rd place finisher, Joanna Evans, very nearly got a national record as well. She finished in 4:00.15, which missed her own best time by just .01 seconds.

At the time, her swim was a new national record by 7 seconds.

The splits above show the impact of the new ISL reward system in the 400 meter race, which awards extra points (and money) for swimmers who are the front of the pack at the 100 meter mark (in the 400 free) or 200 meter mark (in the 400 IM). Haughey took out her first 100 meters in 56.45, which ranked her 2nd – behind only DC’s Leah Neale. Neale faded to 6th place, but avoided a Jackpot (not by much) and so scored the second-most points with 10.

The only two swimmers who had been better were, in fact, Evans and McIntosh, who swam 3:58.8 in Match #5.

Haughey broke through the barrier last week in Match #12, swimming 3:59.16 and picking up another win (she beat out Evans in that race as well).

The 15-year old McIntosh, meanwhile, an age group phenom who is living up to her hype as she moves into the senior ranks, broke her own Canadian Record that was set earlier this season.

McIntosh was aggressive in her first 100 meters too, though she only was 4th at the checkpoint, limiting her scoring. The young Canadian held that speed for longer versus Haughey, who settled into her pace sooner and came back harder on the final 100 meters.

McIntosh was a 3:58.8 in Match 4, which until Haughey’s swim on Thursday was the fastest time in the league so far this season.

Is there anything Haughey can’t do? Breaking a record for a mid distance free and then coming close to winning a sprint breaststroke (an event she doesn’t even swim) in the same session?

Seeing how haughey developed post college makes me want to see macneil on ISL even more. They’re both are bishop n michigan product and both are doing really well in different kind of competition so I want to see how far macneil can do when she has chance to race against pro in competitions outside world championships.

Be very interesting the development of both these swimmers in the next 3 years leading up to Paris, with them clashing in the 200Free & seeing their growth in the 100 for Haughey & Summer especially in the 400 free.

Why do the hot up and comers have to be in events that Aussies are good at? Haha. Can we get some amazing new talent in other events please?

No entires for Aussies in 400 medley at Tokyo.

Aussies won the 100/200/400 free at Tokyo and those are the events that Haughey/McIntosh are excelling in. No one was talking about the 400IM.

Also Kaylee McKeown would have been top seed if she had entered. She has the fastest 400IM in the world in the last year outside of Ohashi’s actual gold medal winning swim.

I was responding to Jamesabc wishing for new talent in other events Aussies are not good at and why mentioned 400IM. Sure McKeown is great at 400IM but she didn’t swim at Tokyo nor did any other Aussie. 400IM is an opportunity worldwide. Gold medal in Tokyo almost 6sec off world record set a while ago.

So far the best life achievement of her is in 200 – 5th best result in the history of this event (textile). At anything else she maybe good or even very good, but behind of competition.

the 200 and 400 womens fields are incredibly competitive wdym