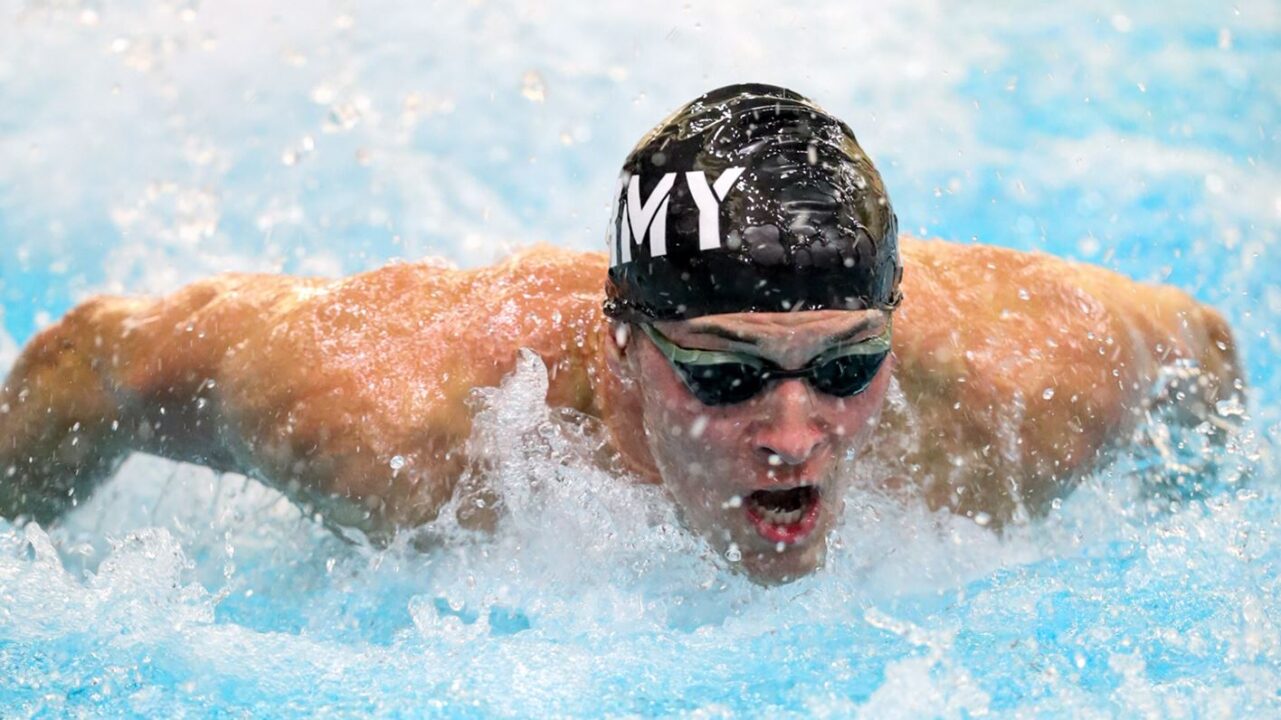 COLUMBIA, S.C. – South Carolina swimming & diving split their first day of competition with the women’s team earning a dominant win over Army and the men dropping a close contest. Graduate diver Brooke Schultz individually contributed 18 points to the women’s team win, sweeping the springboards and setting a new school record in the process.

The women got off to a hot start, taking places 1-4 in the very first relay event, and didn’t let up. The Gamecock women picked up wins in 14 of their 16 events and ended the meet with a final score of 204 to Army’s 88.

The Gamecock men earned seven of their 16 event wins and fell to the Black Knights by a narrow 158-140 margin.

Schultz got her day started with a score of 413.78 in the 3-meter dive to break her own school record set at last season’s SEC Championships. The graduate had a previous school record of 407.30 to which she added 6.48 points for the new record. Schultz then went on the win the 1-meter dive with a score of 352.88, nearly 25 points ahead of the second-place finisher.

“I’m so proud of our team and their efforts today! They raced hard and competed well against a tough Army team. Our divers were outstanding highlighted by Brooke Schultz breaking her own school record in the 3-meter event.

With twenty-seven newcomers this year, including half of our men’s team, we are definitely young, however I absolutely love the individuals on this team right now and the positive attitudes and vibes they bring to the pool each and every day. We understand that we have a lot of growth and development ahead of us as a team, however it’s really exciting when thinking about our potential in the years ahead. I’d like to give a special shout out to our parents and alumni that showed up today in support of our first home meet. The atmosphere was absolutely awesome.”

Up next for the Gamecocks

South Carolina will return to action on Saturday, October 8 when they host LSU for their conference opener. Diving will begin at 10 a.m. with swimming following at 11 a.m.

Columbia, S.C.– In Army’s season opener results are split between the men’s and women’s swimming and diving teams.  The men defeated powerhouse South Carolina 158-140, while the Gamecocks defeated the women 204-88.

In many events the Black Knights dominated early and took the top two spots as well as finishing third.  Evan Yoo finished second in the Men’s 100-yard breaststroke with a time of 55.72, while Freshman Kohen Rankin finished first with a time of 55.62.  Each received nine and four points towards Army’s score respectively.

With this victory against South Carolina, the Black Knights are looking to continue their success in Wilmington, NC and will go up against UNCW.

Women’s Team: The Black Knights fell to a strong USC team, finishing 88 to 204.  While the Gamecocks took control early, the Black Knights were still in contention in several events.  The Black Knights finished top four in the 1000 yd. Free and the 200 yd. Free.  Freshman, Molly Webber had a first-place finish in the 500 yd. Free. Sophomore Diver, Minh Donnell finished in the top 5 in the diving events; she finished third in the 1 Meter Dive and fourth in the 3 Meter Dive.  Freshman Molly Webber also had success and kept close behind South Carolina’s Victoria Kwan finishing second with a time of 2:01.99. Freshman Catriona Gilmore also stayed close behind South Carolina finishing second with a time of 1:04.14.

Sophomore Diver, Minh Donnell finished in the top 5 in the diving events; she finished third in the 1 Meter Dive and fourth in the 3 Meter Dive.  Freshman Molly Webber also had success and kept close behind South Carolina’s Victoria Kwan finishing second with a time of 2:01.99. Freshman Catriona Gilmore also stayed close behind South Carolina finishing second with a time of 1:04.14.

Coaches Corner:  Brandt Nigro on today’s meet: “I was really proud of how the team competed and carried themselves today.  We have a tendency to come out flat early in the season, especially after long travel and we made it a priority to be sure to strike first this season… On the men’s side, I’m so proud of how far they’ve come over the last year. Owen Harlow stepped up big walking away with 4 wins and individual times/splits that are so far ahead of where he was last year. Evan Yoo picked up where he left off last year and took care of business in all 3 of his events. I’m so impressed with the way Sam Wesley raced today with passion, but more importantly, confidence and belief in himself. I could go on, but bottom line this was a team win and big moment for our program… On the women’s side, we saw the results of many months of hard work, elevated commitment, and a great plebe class.  Molly Webber was great today in all of her events and picked up a big win against so high-level competition. Catriona Gilmore was great in all her races and really adds depth and fire to our breaststroke and IM events.  Minh Donnell was great on the boards, picking up a 3rd place on 1 M against a team that regularly sends divers to the NCAA Championship.  The energy and bond that this team is bringing to each practice and now our first meet is impressive and I’m excited to see where we can go once we get everyone healthy and back together!”

Up Next: The Black Knights are back at it again when they compete against the University of North Carolina Wilmington at David B. Allen Natatorium on Saturday, September 24, at 11AM.

Brandt’s a rising star adding to the Holloway coaching tree.