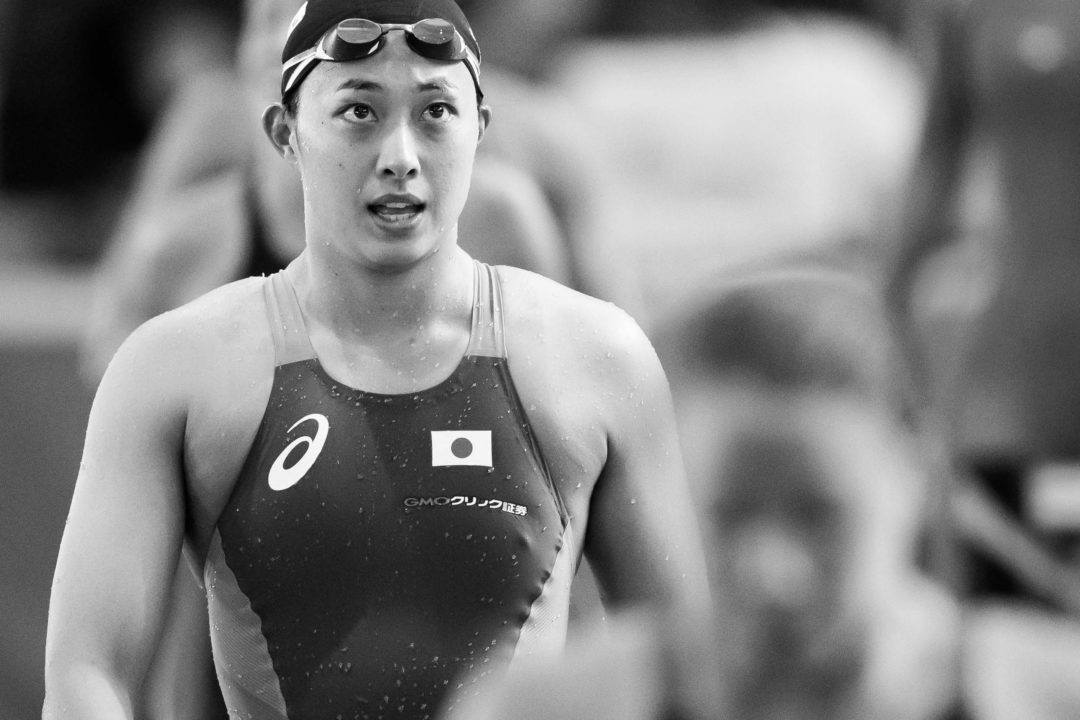 Satomi Suzuki was the top qualifier in the women's 100 breaststroke at the Japanese Olympic Trials on Sunday morning. Archive photo via Mike Lewis/Ola Vista Photography

Day 2 prelims of the 2021 Japanese Olympic Trials have concluded at the Tokyo Olympic Aquatic Center. Due to the nation’s tough qualifying standards, no new swimmers were added to the Olympic Roster during the morning session. The women’s 100 back semifinals will be a close race, with the top three performers all having finished within 0.28 seconds of each other in the prelims heats.

The men’s 200 free semifinals will be an exciting race, as National Record-holder Katsuhiro Matsumoto will have to fight to regain his spot as the top seed in the event. Ryosuke Irie will also have to defend his spot in the 100 back. The Japanese Record-holder finished the prelims heats seeded 0.85 seconds ahead of Masaki Kaneko.

Satomi Suzuki‘s 100 breast was the 20th-fastest time in the world so far this year, but still 0.29 off the minimum qualifying standard. She has another opportunity to qualify for the Olympics in the semifinals.

Waka Kobori proved how strong her back-half was in the 400 free, coming from behind at the 200 to win the heat by 3 seconds. She will go into finals as the second seed behind Miyu Namba.

The prelims session opened with the 100 back, with 18 women entered. All but two women made it back for the semifinals heats. Top seed Rio Shirai was 1.7 seconds slower than her entry time and will be third going into semis with her 1:01.16 in heats. Natsumi Sakai (1:00.88) had the fastest swim of the morning and will swim out of lane four in tonight’s semifinal. Emi Moronuki (1:00.92) will be in lane 5.

Four heats of men competed in the 200 freestyle. The winner of heat 2, Konosuke Yanagimoto was the top performer in prelims, touching in 1:47.79. He dropped 0.06 seconds from his entry time. National record-holder Katsuhiro Matsumoto will swim in lane 5 after finishing second (1:48.49). He set the Japanese record with 1:45.13 in January at 2021 Kosuke Kitajima Cup. The fifth and sixth seeds going into the event – Fuyu Yoshida and Keisuke Yoshida – did not make it back to the semifinal heats. However, Hiroto Shimizu – who was ranked 31st coming into the meet – clinched a spot in the next round with his 13th-place finish (1:49.48).

Yo Ishiwata, who was ranked 25th, earned a spot in the semifinal after going a personal-best time of 1:09.63.

Japanese national record-holder Ryosuke Irie will remain the top seed heading into the semifinals with the fastest performance of the morning, 53.53. Masaki Kaneko‘s 54.38 was the second-fastest swim. Third-seed Yuma Edo dropped down to 10th place and 8th-seed Junya Koga nearly missed out on a chance to swim in the next round. Coming in with an entry time of 54.66, he swam 55.62 to finish 15th. Ryuka Ino and Tomohiro Ito will need to take part in a swim-off to determine who will take the final spot in the semi-final; they both touched in 55.63 to tie for 16th.

Miyu Namba will take the top spot going into the 400 free finals with her time of 4:09.14. She won heat 2 by 2.26 seconds and will be the top seed by 1.4 seconds. Waka Kobori will swim out of lane 5 in the final after cruising to the wall nearly three seconds ahead of the next swimmer in her heat, Aoi Masuda. Masuda was leading the final heat for 200-meters with Kobori following closely behind. Kobori took off after her turn at the 200 mark and powered the rest of the way home, leaving Masuda in her wake.