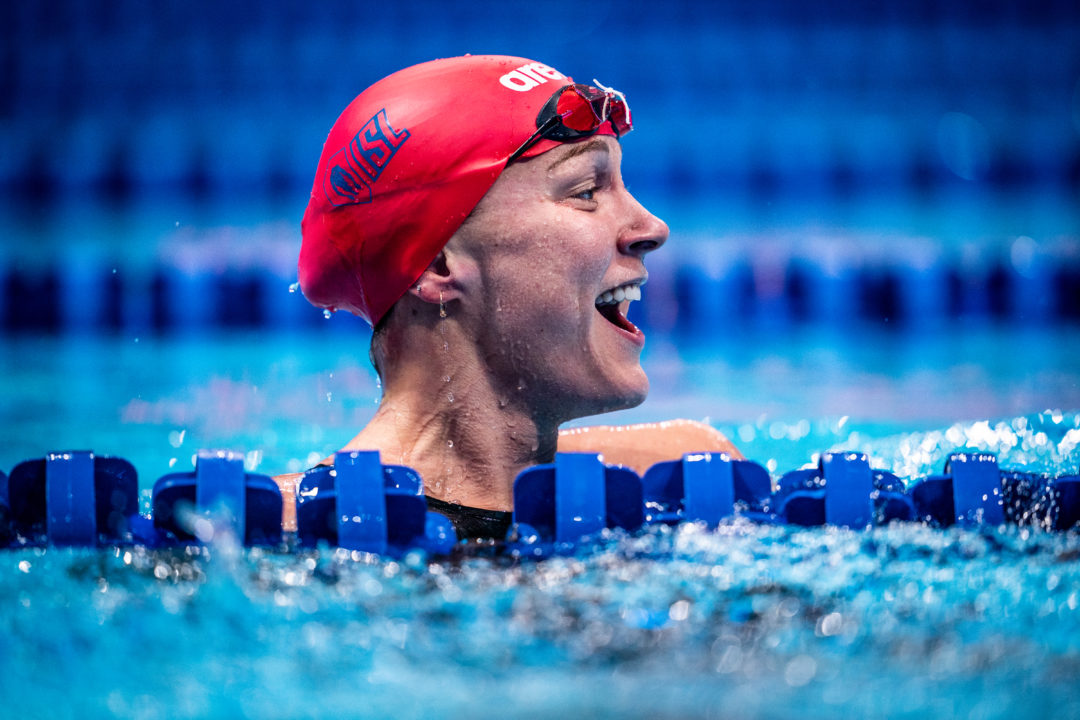 Sarah Sjostrom scored 60.5 points for Energy Standard at ISL 2021 Match 1 which was enough to win her 4th career Match MVP title. Archive photo via Mine Kasapoglu

Energy Standard swimmer Sarah Sjostrom was named Match MVP for the first meet of the 2021 International Swimming League season, collecting 60.5 points for her team throughout the 2-day meet.

After not swimming one of her signature events, the 100 butterfly, Sjostrom collected her first ISL win of the year in the women’s 50 freestyle with a 23.50 for 12 points. While the 50 freestyle was Sjostrom’s only individual win on day 1, she also picked up points in the women’s 4×100 freestyle and medley relays. In the freestyle, she helped her team to a second-place finish for 3.5 points and then earned 2.5 points for her 4th place finish in the 4×100 medley relay.

Sjostrom has amassed 18 points on day 1 of the meet, meaning that she scored her other 42.5 points on the second day of racing. Sjostrom began day 2 with a 2nd place finish in the women’s 100 freestyle for 7 points and followed that up with a 19-point win in the 50 butterfly. Sjostrom stole points from the slowest 4 women in the heat to give herself a bonus of 10 points, along with the 9 points awarded to her for winning the race.

Sjostrom’s MVP win comes along with an $8,000 bonus and she will also be given the $800 bonus that each Energy Standard swimmer wins for the team victory.

Energy Standard won the meet with 511.5 total points which was just ahead of the Toronto Titans’ 496.5-point haul for 2nd. The Aqua Centurions finished 3rd with 442.5 points and DC Trident came 4th with 311.5 points.

This is the second time that Sjostrom has been named MVP at the first ISL meet of the year, having won match 1 back in 2019. While she only won 1 Match MVP award during season 1, Sjostrom was also named the league MVP for 2019 after winning the most points season-wide out of anyone in the league.

In 2020, Sjostrom won 2 Match MVP awards during Match 9 and semi-final 1 but finished 5th overall season-wide, a feat made more impressive by the fact that she only raced at 5 meets compared to the 6 meets that all other top 9 finishers competed in. She sat out of Match 6 after sustaining a back injury mid-season but returned shortly after to compete at Match 7.

Sjotrom was injured again earlier this year when she broke her elbow in February 2021 just a few months before the Tokyo Olympic Games. While Sjostrom didn’t seem to reach full form by the summer of 2021, missing the podium in both the 100 free and 100 butterfly, she did manage to nab a silver medal at the Olympics in the 50 freestyle.

Sjostrom’s teammate Siobhan Haughey finished 2nd overall in MVP points during match 1 with 51 points, while Evgeny Rylov gave Energy Standard 3 members in the top 3 with 48.5 points. Chad le Clos of Energy Standard and Louise Hansson of the Toronto Titans tied for 4th place with 46.5 points each, followed by Thomas Ceccon of Energy Stanard with 42 points, and Summer McIntosh with 38 points. Kylie Masse and Kayla Sanchez tied for 8th with 30.5 points and Szebasztian Szabo rounded out the top 10 with 29.30 points.

I have only seen the results not the races but her skins win loooks very smart.

What a beast. She seems to have the best attitude always. Especially with the recent recognition of all the mental health challenges of elite athletes, it would be a great interview to find out how she’s handled various setbacks — particularly the elbow fracture — and how she stays so positive and moving forward.

Top 4 for ENS and still didn’t win the match by much.