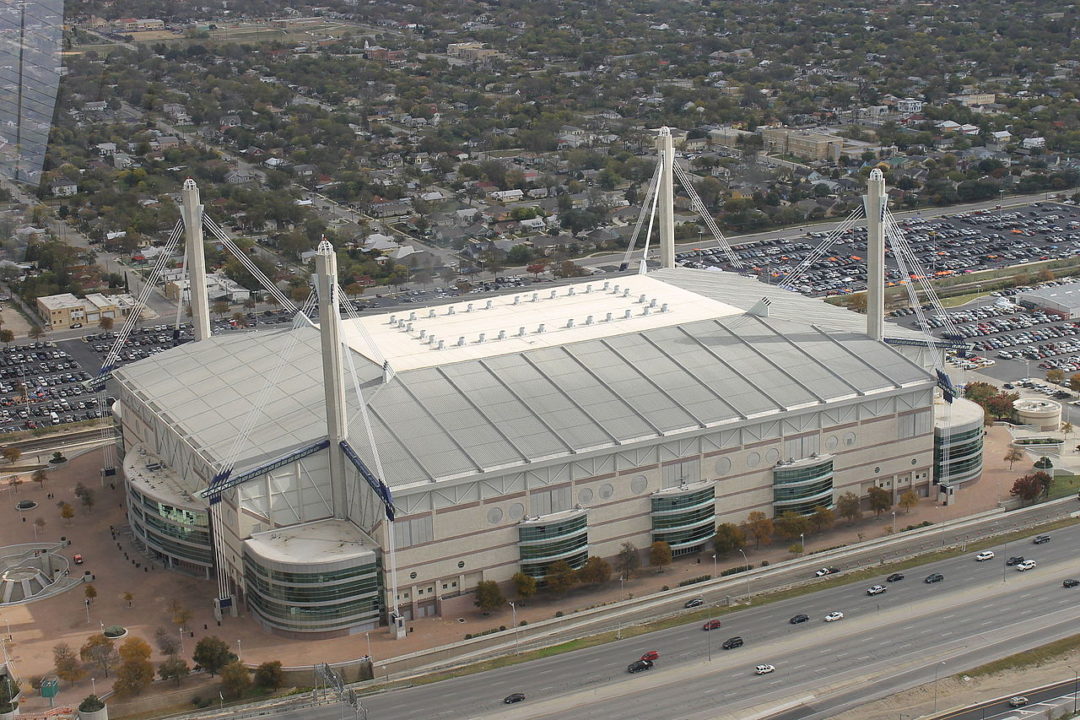 The San Antonio proposal would use a section of the 64,000 seat Alamodome, with some temporary seating installed, to host the US Olympic Swimming Trials. Archive photo via Billy Hathorn

San Antonio Sports, the organization in charge of bringing large-scale sporting events to the city of San Antonio, Texas, unveiled on Thursday that it would be bidding for the rights to host the 2024 U.S. Olympic Swimming Trials.

In a Tweet, the city shared screenshots from a conference call where they discussed the plan with USA Swimming COO Mike and National Events Manager Dean Ekeren.

San Antonio joins a list of expected bidders that includes Indianapolis and St. Louis. Omaha has not officially announced a plan to bid, though as the host of the 2008, 2012, 2016, and 2020 Olympic Trials, they will have strong momentum to bid again.

Sources tell SwimSwam that there is at least 1 other city actively pursuing the hosting rights to the quadrennial event that chooses the American team for pool swimming at the Olympic Games.

San Antonio, Indianapolis, and St. Louis all also bid, unsuccessfully, for the rights to host the 2016 Olympic Trials in a very public campaign. According to Mike Unger in 2017, cities asked USA Swimming to not do an extensive bidding process for the right to host the 2020 Trials.

The San Antonio plan would host the event in the Alamodome, which is a multi-purpose facility in the city that can seat up to 64,000 when structured for football games. The facility was opened in 1993 as part of the city’s bid to attract an NFL team, which never happened. The NBA’s San Antonio Spurs played there for a decade.

While the venue is well-equipped and has experience to host a number of different events (from graduations to ice hockey to NCAA basketball games), its only current permanent tenant is UTSA football. That makes it available in the summer timeline when the US Olympic Trials are typically held.

That availability is the ongoing challenge for the ‘perfect’ facility, as most of the ‘sweet spot’ facilities in terms of size are professional basketball or hockey stadiums that have the potential to be in use by their home franchises in June.

While the Alamodome is probably too large in its standard configuration for the Trials, a rendering showed to USA Swimming would situate the competition pool in one corner of the stadium with temporary seating built around the pool to maintain a ‘all four sides’ atmosphere. The warmup pools would be on the stadium floor, but behind the temporary stands.

This would, essentially, cut the cavernous stadium in half from its normal seating. No exact numbers for what that would do for capacity were made available.

This is what a site visit looks like in a pandemic world. Bienvenidos @USASwimming! We think SA is the perfect place to host the 2024 U.S. Olympic Swim Trials. Our beautiful city has a great rep. for hosting successful events & can deliver what you need to make the Trials shine. pic.twitter.com/t3aRzvd2Rf

The most recent 4 editions of the US Olympic Trials, including 2021, have been hosted in the Chi Health Center in Omaha, Nebraska. In 2016, for the first time, the meet sold out every seat for every session in the 18,000+ seat arena.

While Omaha has grown the Trials event to a new level, continuing overlap with the NCAA’s College World Series held nearby, and the housing shortages that result, make exploration of alternate host cities worthwhile. With a population of over 1.5 million, San Antonio is easily the largest of the known bidders so far. It is the 7th-largest city in the U.S. in total.

According to event planning supplier network Cvent, San Antonio has over 45,000 hotel rooms citywide, including 14,000 rooms in the downtown area. That’s roughly twice as many downtown hotel rooms as Indianapolis and St. Louis have.

I’d love to see San Antonio and Indy be in the mix.

San Antonio could be a great host! They definitely have the hotel capacity too, and there are plenty of facilities in the area to offset lane space. NISD natatorium which hosted 2015 nationals could already play a huge role in offsetting lane space, and allowsing athletes to practice in a less crowded facility during trials, similar to how the IUPUI could if Indy hosted trials. I, personally, would absolutely pick San Antonio over St. Louis, but I’m not sure if I would prefer San Antonio over Indy or not.

Oh, I would definitely pick San Antonio over any other. Big support for swimming,many teams and pools. Best food – imagine smiles on swimmers’ faces when they step out and smell Tex Mex? We love San Antonio and we go to meets there several times every year.

Haha. I love that image of TexMex after trials! 2015 Summer Nationals was the first time I had been to San Antonio, but I agree that it was a great city, and they hosted a great meet (despite the lightning causing delays for finals, but that obviously wouldn’t be an issue at an indoor meet). Just in general, all of those Texan cities do great jobs hosting meets: SA, Austin, even College Station (though I hate driving out there). I’d love to have San Antonio host it.

First, my opinion should carry absolutely no weight. Second, I am speaking from a spectator perspective as I have been to every one of the Olympic Trials that have been held in Omaha. I do not have a swimmer attending, I just love swimming. I am so tired of Omaha. It was great the first two times but if you aren’t in the Hilton, the overlap with the College World Series creates issues getting to the pool. Plus I feel like I have done everything in Omaha. I have tickets for 2021 but we are seriously reconsidering going. I know someone will buy my tickets if we decide not to go. So my vote is for anywhere but Omaha. I… Read more »