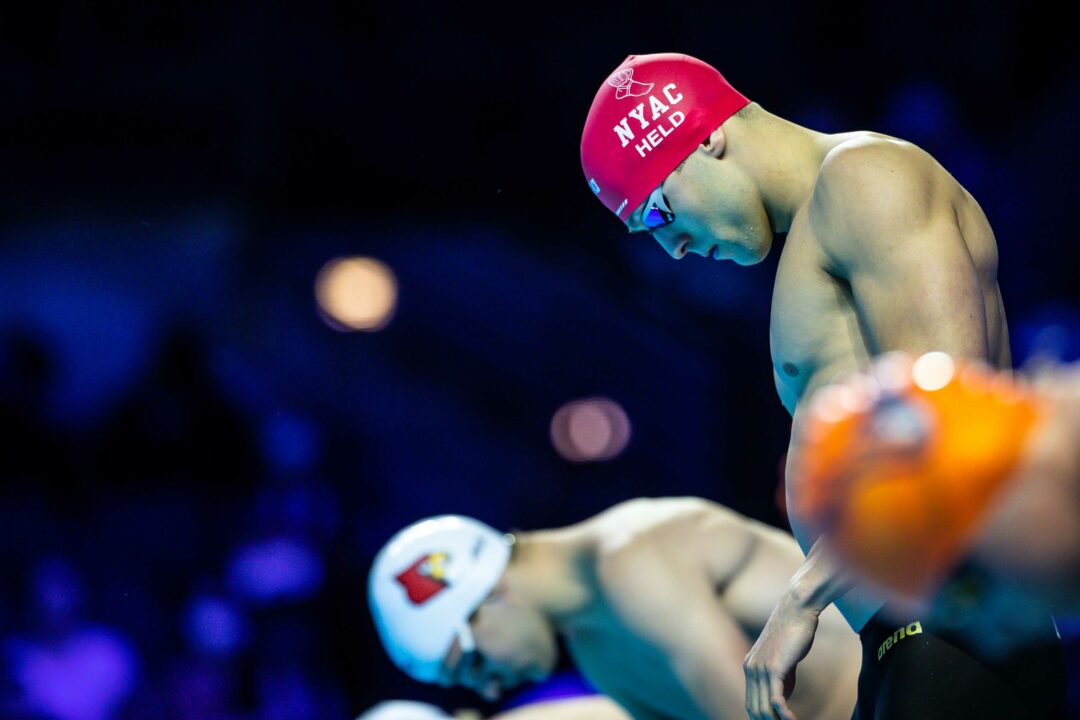 Ryan Held, racing in Tempe, Arizona, has broken a Cesar Cielo World Record, but probably not the one that you're thinking of. Archive photo via Jack Spitser/Spitser Photography

Not the World Record you may be thinking of, though.

The Brazilian Cielo, of course, is not best known for his Masters swimming results. He’s best known as the 2008 Olympic gold medalist in the 50 free, an 11-time World Champion, and the current World Record holder in both the 50 and 100 freestyles in long course (which are, ironically, both faster than his short course masters records).

The meet was held in the Mona Plummer Aquatic Complex at Arizona State University, where Held is now training under Bob Bowman and the rest of the staff at Arizona State.

Ironically, Cielo was also training at Arizona State (albeit under Scott Goodrich) at the time of his Masters World Record swim. Because Cielo was registered with a US Masters Swimming team at the time, his swims are also the USMS records, even though he is Brazilian.

In a video posted to Instagram on Saturday, Held’s fiancée Lexie Lupton, a former NC State swimmer, informed him that he broke the World Record, and Held appeared surprised by the news.

Held competed in the International Swimming League regular season for the LA Current, but has remained in Arizona as the team has begun its playoff journey. He is on the team’s announced roster, but they have just 1 Playoff match remaining before the grand finale in December.

Held also swam 1:46.52 in the 200 free, and is scheduled to swim 4 more races on Sunday, including the 100 free. Held is a member of the U.S. team for the Short Course World Championships in December, entered in the 50 and 100 freestyles.

So happy for Ryan, after the disappointment of seeing him miss the Tokyo team by a hair!

Bravo for that headline.

I thought Ryan was on SC worlds team?

Sorry must have read it wrong earlier

I’m glad I’m well out of the 25-29 age group! It’s fun seeing the Olympians show up at USMS Nationals and throw down some awesome (for us non-Olympians) swims, but it was always a tiny bit depressing looking at the USMS record books for that age group and seeing the likes of Grevers, Adrian, etc on top of the lists in that age group with truly unattainable times for us mere mortals.

I live for SS headlines like this! Love it!

Actually now that I have read the whole article it’s really, interesting, well-written and informative! Thank you!

This headline is such a bait lol

Caeleb Remel will get that rubberized 20.91 soon.

Don’t worry about that.

Only if he stops training for the 4IM

He is back with his old sprint coach at UF.

Certainly not smashed lol. 20.8 is possible, 46.7-8 for free, which will probably be a rough tossup between him and Chalmers