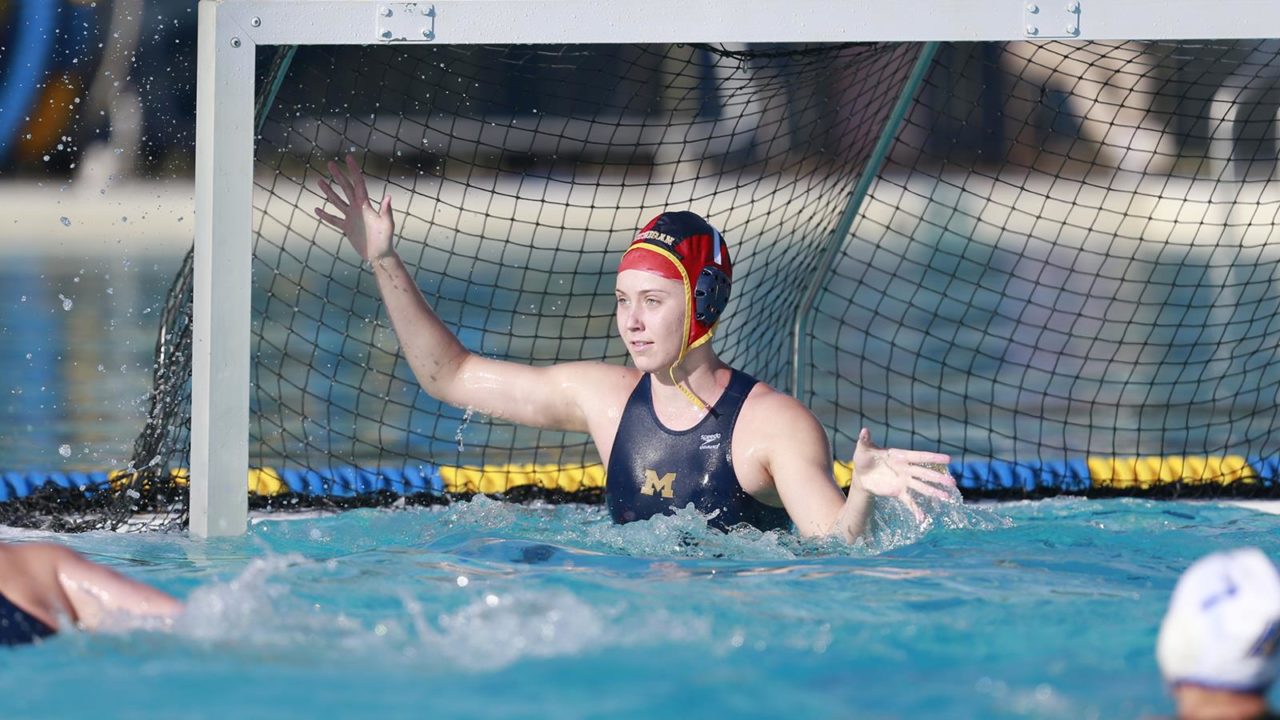 Michigan’s Heidi Ritner racked up 43 saves to help the Wolverines to a 2-2 mark at the Barbara Kalbus Invitational in Irvine, California, the most stops among goalkeepers earning Week 6 conference honors.

Gannon’s Kelly Fehr used a school record setting performance against Washington & Jefferson to vault herself to Western Water Polo Conference nods and a total of 16 scores on Week 6. Fehr led all individual game scoring efforts on Week 6 with the 10-goal haul against the Presidents.

Below are the Week 6 conference player of the week honorees.

Player of the Week: Alba Bonamusa Boix, Hawai’i – Scored 12 goals as the Rainbow Wahine finished fourth at the Barbara Kalbus Invitational; put in six goals in a 9-6 win over #15 UC Davis; logged a hat trick in an 11-5 win over #5 Arizona State; tacked on a goal, two assists and a steal in a 12-9 loss to #1 Stanford; wrapped the weekend with two goals and two helpers in a 10-5 loss to #2 UCLA.

Newcomer of the Week: Anne Rankin, Michigan – Accounted for two goals and two steals at the Barbara Kalbus Invitational; notched two goals in the 11-10 OT win over #7 Cal; registered one steal in a 7-2 loss to #2 UCLA; grabbed one steal in a 5-4 win over #9 UC Santa Barbara.

Player of the Week: Kelsey Snelgar, Loyola Marymount – Racked up 11 goals, three assists and four steals as LMU went 2-2 at the Barbara Kalbus Invitational; scored one goal in a 20-8 loss to #4 USC; put in four goals and grabbed a steal in an 11-8 win over #12 Long Beach State; picked up two steals and dished out one assist in a 12-6 loss to #7 Cal; dropped in six goals and added two assists and a steal in a 13-10 OT win over #13 San Jose State.

Offensive Athlete of the Week: Malia Josephson, Wagner – Scored a team-high seven goals and added five assists at the Courtney Fisher Invitational; accounted for six goals and three assists in a 21-8 win over La Salle; added one goal and two assists in a 12-10 win over #24 Marist.

Defensive Athlete of the Week: Isabel French, VMI – Made 33 stops at the Washington & Jefferson Invitational as the Keydets went 4-0; registered a 55.9 save percentage; grabbed 13 saves in a 10-9 overtime win over Salem; tallied 12 saves in a 12-9 win over McKendree; added seven stops in a 17-8 win over Gannon.

Player of the Week: Holly Parker, USC – Logged 27 saves (9.00 per game) with a 6.33 goals against average as the Trojans repeated as Barbara Kalbus Invitational champions; racked up nine saves in a 10-7 win over #6 UC Irvine; tallied a career-high 10 saves in a 9-7 win over #2 UCLA; made eight stops in the 10-5 win over #1 Stanford in the final.

Newcomer of the Week: Hannah Palmer, UCLA – Scored five goals and added five steals as the Bruins went 3-1 en route to third place at the Barbara Kalbus Invitational; racked up four assists, two goals and two steals in a 10-5 win over #3 Hawaii in the third place match; scored twice and added two assists in a 14-3 win over #21 Pacific; dished out one assist in a 7-2 win over #10 Michigan; managed one goal in a 9-7 loss to #4 UCLA.

Offensive Athlete of the Week: Nancy Trinh, La Verne – Netted 10 goals and added six assists and six drawn exclusions as the Leopards went 4-0; put in five goals and added two steals and two exclusions in a 19-8 win over Macalester.

Defensive Athlete of the Week: Shelby Garcia, La Verne – Posted 23 saves and two steals as the Leopards went 4-0; grabbed seven saves in one half of a 20-3 win over Monmouth; tallied seven saves and added four assists in a 19-8 win over Macalester.

Player of the Week: Kelly Fehr, Gannon – Scored 16 goals, including a school record 10 vs. Washington & Jefferson, as the Golden Knights went 3-1 at the W&J Invitational; scored twice in a 16-15 win over McKendree; put in four goals in a 14-12 overtime win over Salem; drew 15 exclusions, eight steals and an assist on the weekend.