Returning To Racing In The Open Sea 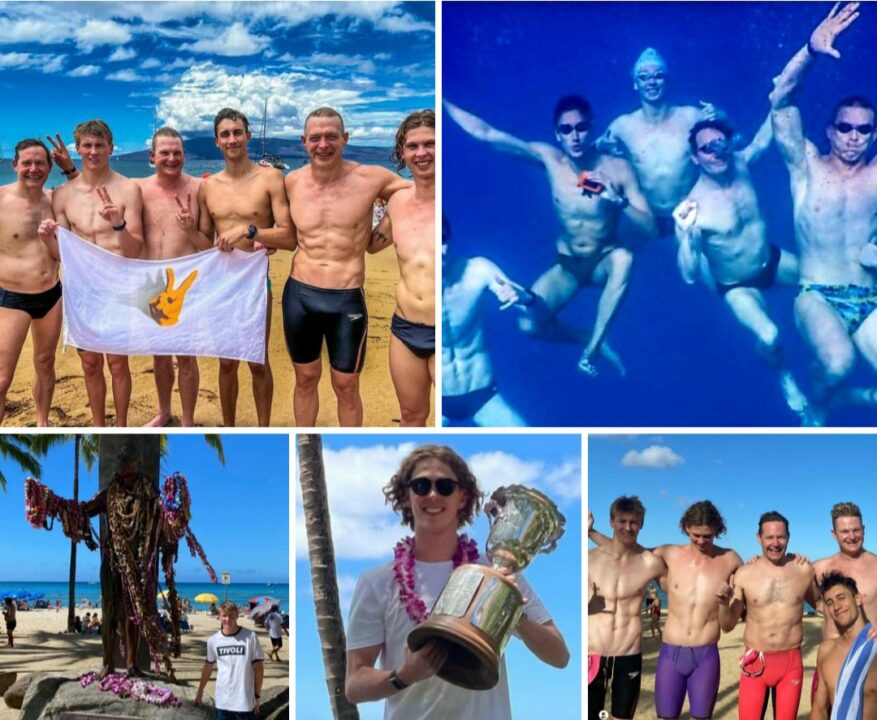 “Because memory is time folding back on itself. To remember is to disengage from the present. In order to reach any kind of success in automobile racing, a driver must never remember.

-Garth Stein, The Art of Racing In The Rain

This past weekend hundreds of swimmers returned to the beautiful waters off the Hawaiian Islands, it has been 156 weeks since these races occurred. For many of us racing has been a distant memory and now is a welcomed presence. I recently caught up with the winners of the Maui Channel Swim and 3 of the top 4 men’s podium finishers in the Waikiki Rough Water exploring just how they were able to keep their fitness and excel after the world had been shut down.

First of all, I’d say you need motivation, my first motivation was fitness. Swimming is what I knew best and could gauge my fitness so I just started going to the pool near work regularly before work in the morning. I’d moved to Sydney from the UK and we had 2 small kids so finding the right time was important and pre-work seemed to be the best option. Then at the pool one morning I bumped into another British guy, Jon Roberts, in a similar age bracket and we competed in the same competitions in the UK. We started to train together regularly and get a bit fitter.

Working for Speedo I was also exposed to the Ocean swimming races that we support or have ambassadors racing in. Along with that the swimming culture in Aus, actually the general culture in Aus is to “Have a go”. Swimmers just doing a 2.5km swim from beach to beach for the fun of it and completing it even though it was a competitive event. I had an excellent MCR showing and WRR.

I did a couple of Ocean Swims for fun and that was the target set. Trying to do better next year was my goal. So Jon and I kept training and we were switching things up meeting at different pools around Sydney when we bumped into a group in a lane doing a training set and offered the opportunity for us to join (…. at the back!)

And from that moment on all roads we’re leading to Rome and back to competitive swimming. This group had Olympic medallists and Open Water or Surf Swim Champions.

John De Mestre, Chris Fydler, Justin Hanby, Guy Farrow, Peter Thiel were the core of around 16 that got together regularly to do a session. They trained hard and talked about events they wanted to go to and take part in. Very modest but it soon became clear this group was not there to make up the numbers.

So the first challenge was to step up my training game. Finding and making the time to train with a young family and busy job is one of the hardest bits. I have a supportive wife (who knows she gets a better man in her world when he’s been swimming) and l get to swim 4 mornings a week. And then it’s about a commitment to make up a session if I miss work or do something when I’m traveling with work. Not every run into an event goes to plan with work and family, there is no pressure and a complete understanding that that is how life works for master swimmers. In general there is just a supportive group wanting everyone to do what they can and be the best they can. I’ve been lucky to have landed in this group of world class master swimmers. They are teaching me about ocean swimming and remind me regularly when we are pool training that there are no walls in the ocean so my good turns don’t mean a thing!

The pandemic gave me a chance to take a step back and reassess what I wanted to do with my swimming at the time. I think personally it was a blessing in disguise where I didn’t know what I had until it was gone. At the end of the lockdown period I was able to come back and ended up pb’ing (Personal best) in all of my events which was amazing.

On the flip side it meant that I wasn’t able to see my family. My parents live in the Cook Islands and I live in Australia so it’s been almost three years since I’ve seen them and that’s mainly due to both lockdowns and choosing to continue training as the Cook Islands doesn’t have any training pools.

Racing again has been the best. There’s nothing that can replicate the excitement and nervousness you feel when you’re preparing on race day. Being back in Hawaii and doing both the channel and roughwater after 3 years has been the best. The community that comes together to compete in these events are amazing and I would recommend more people to get involved if they have the means.

This was not my first time swimming in Hawaii as I’ve done another swim in Waimea a couple years back and another at Waikiki a long time ago. The Maui Channel swim was the best swim I’ve ever done and I would highly recommend it to any swimmer. To come away with a win was a bonus and having such a great team made it easy and enjoyable. The Waikiki Roughwater was tough but fun as we were all pushing each other and knew it would all come down to some tactics in the end, so to come away with a 4th was very nice. I’d say my brother (Ned Wieland) swimming has inspired me a little in the sense of getting out of my comfort zone, so yes. He is the youngest Aussie to swim the English Channel and complete the triple crown and his goal is to be the youngest to do the Ocean 7. I would love to just push myself and see where my swimming can go. I’ll stick to ocean swim racing and would love to explore the world swimming and making new friends.

Going into the pandemic was crazy. We weren’t allowed to swim in public pools and hardly even allowed to go to the beach. I decided to pick up some road cycling at the start of our 6 month lockdown and really enjoyed the change and being out of the water. It then took a while for us to be allowed back into the pools and even longer to get back into any sort of squad training. I was working as a Commercial Analyst at an Australian online retailer and was really not enjoying the work I was doing so I decided to do my Masters in Secondary Education (majoring in Mathematics).

Racing now, especially over here in Hawaii feels like such a privilege. We have had so many ocean swims postponed and then canceled amongst COVID-19. To actually get here and participate in these stunning swims has just been the best experience. I feel like a young 19-year-old doing his first Waikiki Roughwater. So stoked to be back.

Recently I have found my love for training again. It is kind of cliche but one morning not long ago I woke up and just didn’t like who I saw in the mirror and wanted to start pushing my body and mind again and I knew being back in the pool was how I was going to do it. So for me – I really just want to keep improving! I’m almost 26 so even just going PBs at training and in races is awesome. From there I would love to get back competing with the best in Aus and then go from there!

My girlfriend (Nikki Catflisch) and family are incredible. They make the process so much easier and they support every decision I make. I have an incredible coach that has always wanted me to be at my best and some great friends who jump in the pool and gym with me too!

I usually will pull my cap and goggles off as I approach the beach. The sauntering only happens if I (ever) have a lead! I stood up this year and just wanted to take in the finish, all in. We really don’t have anything like it in Australia. ( Check out his finish on Instagram under the_snickers by @thezoghbiphoto it’s fantastic.)

I would say from 2017 to 2020 I hardly swam and nor did I want to swim- I went through the transition post sport and took time away from swimming and focused on other areas of my life. I wanted to be a better well rounded human – I went back and finished university and invested in lots of different education and put time into a growing new career.

Within that time I learnt I missed swimming and needed to get back into more exercise again for mental and physical health. This was how I reframed getting back into doing a little swimming- it wasn’t about being the best and trying to win ect it was about being healthy, happy, and having fun. Sometimes it’s frustrating not being as competitive as you used to, however those thoughts are natural and I just tell myself that hey you don’t do the work to be competitive these days. Having a supportive girlfriend is awesome- Maddy is funny and loves swimming for fun and healthy and understands the importance of exercise for performance in other areas of life. Seeing her do Waikiki rough-water was amazing, her 2nd ever ocean swim and the longest. (Maddy Stockwell is the daughter of Tracy Caulkins and Mark Stockwell.

As far as the future goes – I’ll keep doing the rough-water and Maui channel.. it may not be every year like Peter Thiel but Let’s see how we go. My good mate in the USA Alex Meyer has suggested I get a team together and come to the trans Tahoe relay so I think that needs to be on the cards; personally these days I prefer the fun team swims rather than solo swims.

Rather than take inspiration from elite athletes I now take inspiration from people managing to find the magic balance between all areas of life so I want to keep exploring that in myself and promoting “Olympicism” and the olympic movement because at its core that’s what “Olympicism” is – a holistic approach to life with sport at its core and for me personally it’s a great simple compass for navigating life.

RESULTS FROM THE WEEKEND OF RACING