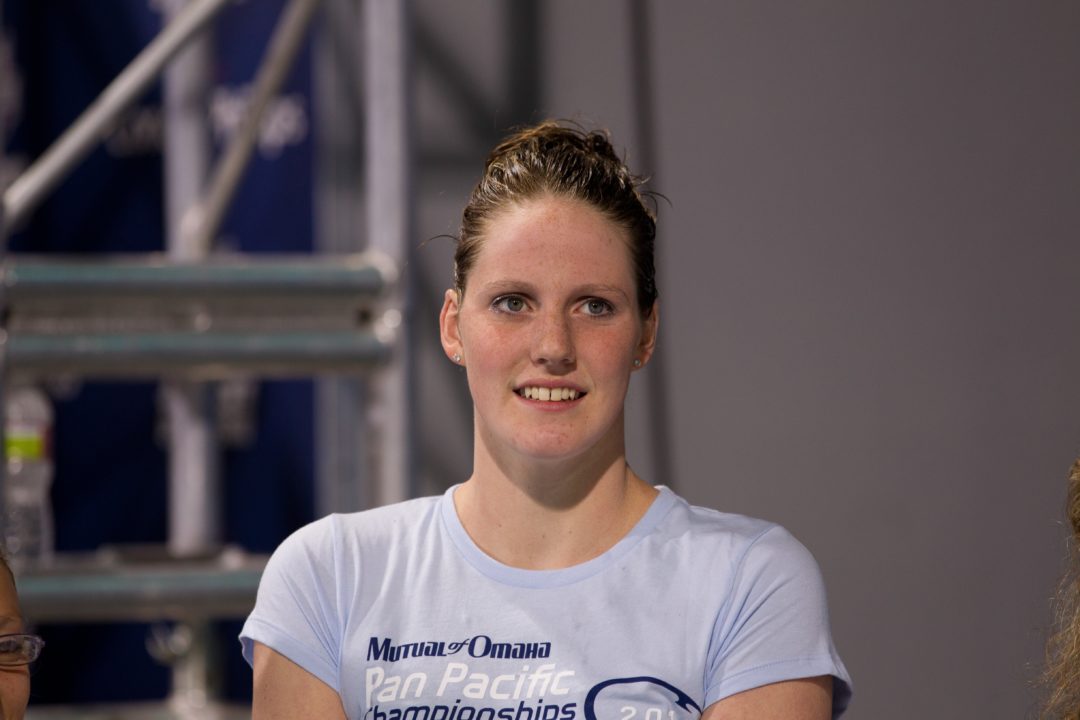 The Regis Jesuit-Cherry Creek swim meet is always a heated affair. Since 2011, when RJ ended CC’s string of 6-straight State Championships (the first of which followed-up a 2006 RJ State Championships), these two teams have taken their rivalry to a new level. The next chapter was written on Tuesday night in the “bubble” of the Raiders, where Missy Franklin and her fellow seniors were honored on Senior Night as Regis won by score of 201-133.

In other racing, Regis Jesuit swimmers Delaney Lanker and Kaylie Breslin had a great battle in the 100 fly. The much more experienced Lanker was able to pull out the victory on the back-half in 59.27, but the freshman Breslin has shown great promise this season and was 2nd in 59.52 (she’s been a 58.1 this season already).

This rivalry got really hot Tuesday morning, when the Wall Street Journal released an article that quoted several parents and former swimmers at Cherry Creek questioning whether Franklin should even be swimming high school, given all of her international accolades. There were no signs of this at the meet, however, which was a friendly affair that appeared focused on healthy competition and recognizing the accomplishments of the seniors in their final dual meet.

Up next for Franklin is the Colorado State Championship meet, where we’ll find out which events her and her coaches decide she’ll be best-suited for. She’s achieved state qualifying times in the 50, 100, 200, and 500 freestyles, the 200 IM, the 500 free, and the 100 back (in other words, all but two of the individual swimming events).

Oh no! Braden you take many risks with another article about Missy and high school swimming. I’m already afraid that the crazy “helicopter mom” from the previous article again comes back.

Is it even an argument that she should be allowed to swim in high school meets? Are you serious? Just because shes sooooooo much better than everyone else lets all try to punish her and give her less choices about her life. Instead, I propose we have cut-off times for high school swimming so all the slow swimmers don’t waste our time making us watch their pathetic strokes. I would really like to go to high school duel meets and not see kids that can’t break 6:00 in a 500.

People have to start somewhere. Several great swimmers did not start swimming competitively until they were nearly in or already in high school.

Oh don’t say that but over 6:00 is the basis of half of the teams in ur area. Of course we have plenty of seats available at our state champs in one of the larger US state populations.

She can’t swim for her high school team without being criticized? Unbelievable. Did the Cherry Creek swimmers even think about what they could learn from racing her? Their defeatist attitude is simply sad and unproductive. Sounds like a lot of this is generated by the parents. Gee what a surprise parents setting bad examples. Let’s hope not of these sore losers has the nerve to ask for Missy’s autograph.

I am sure a lot of this negative attitude is being generated by parents, the bucks stops with Coach Craven. A head coach should never encourage or tolerate poor sportsmanship.

Agreed that team attitude begins with the coach. The Journal article is sort of pathetic. When did words like diligence, perseverance, excellence,champion become taboo idiom in American high school sports?
Just a thought for the parents who are complaining: how many college coaches are going to want your swimmer if mom/dad publicly whine every time that you think something isn’t “fair”?