Jason Lezak Decides to Retire at 37; Will Be Remembered for “The Anchor” 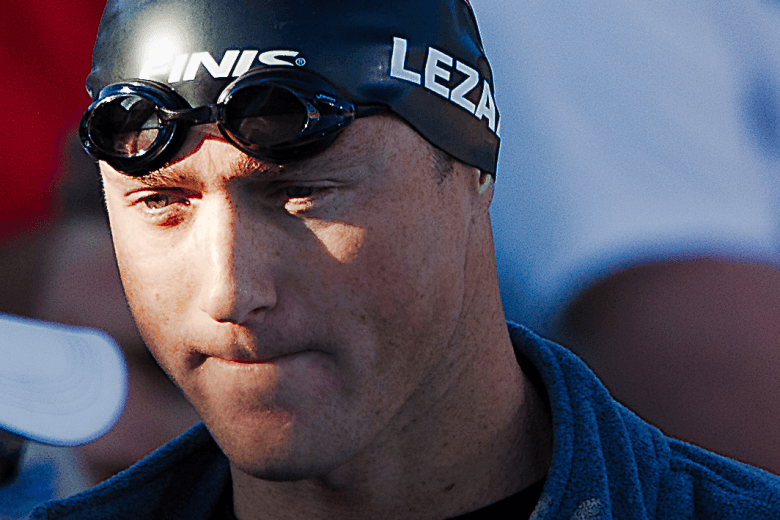 American Jason Lezak, who is nothing short of a swimming-hero, has made his retirement official at 37-years old. (Photo Courtesy: ©Tim Binning/TheSwimPictures.com)

For the last two Olympics, American swimmer Jason Lezak was the oldest man on the United States Olympic Swim Team. Having no desire to make it a third, the 37-year old Lezak has officially announced his retirement today, wrapping a spectacular career that has spanned four Olympics and 8 medals (4 gold, 2 silver, and 2 bronze).

Lezak, though, was more to the American team than just a collection of 8 medals. He was one of the great leaders in swimming history, and gave the sport a moment it will never forget: the final leg of the 2008 Beijing 400 free relay.

Lezak anchors the 4×100 free relay, nearly a second behind Bernard at the 2008 Olympics. (Credit: Lahalle/Presse)

Not that any fans need reminding of this relay, but Lezak hit the water nearly a body-length behind France’s Alain Bernard, who was the World Record holder and swimming as well as any sprinter we’ve ever seen. It looked like the French would have the race in the bag, even headed into the final 50 meters. Then, Lezak unfathomably turned on his ever-incredible engine and ran down the Frenchman.

In itself, this swim was one of the top 3 moments in swimming history, unquestionably, and without accepting of any debate. Adding in what his teammate Michael Phelps was in the midst of accomplishing, with his record-setting 8 Olympic gold medal performance, and this swim was elevated into another stratosphere as the greatest, and most iconic swimming moment ever.

“No matter how my individual performances went at worlds, Olympics, and so on, I always wanted to step up on relays for the team and our country,” Lezak said. “The 400 free relay was one of the greatest moments of my career. I was apart of 6 consecutive years (1999-2004) of losing that relay at international competitions after the USA had never lost before, which included 2 Olympics. It felt great to bring the title back to the USA.”

Lezak is a Southern California boy, born and bred, from Irvine High School through his independent training grounds at Rose Bowl Aquatics. For a man who was such a leader and so looked-up-to within the National Team, he still amazingly trained himself over his last two Olympics without a coach or a training partner.

The relay swim is what he will perhaps be best remembered for by swim fans; athletes, though, always have their own favorite moments, and in a career as long as this one was, there were plenty of higlights. For Lezak, one year that stood out was in 2004, before he achieved his lofty legendary status when he broke the American Record in the 100 free.

Lezak wins individual hardware in the 100 free at the 2008 Olympics.

“I swam faster than my childhood idol Matt Biondi for the first time in that race,” Lezak reminisced about his great career. “That’s a moment I’ll never forget. I also often think back on another swim from Beijing, where I won my first Olympic medal (bronze in the 100 free, tied with Cesar Cielo). I’d been 4th or 5th over-and-over again at big international competitions, and that swim finally broke me through.”

He was a unique man. In 2009, when he sat atop the heap as one of the world’s great stars of swimming, Lezak skipped the World Championships to instead represent the United States at the 2009 Maccabiah Games. “This is the perfect time in my career to do something like this,” he said of the decision.

That was a big moment for Lezak. He was very proud of his Jewish heritage, and stands among the greatest Jewish swimmers of all time. That’s no short list, either, including names like Mark Spitz, Dara Torres, Garrett Weber-Gale, and Lenny Krayzelburg.

He almost retired after 2008. His agent, Evan Morgenstein, says he was “very close.”

The two had a very special relationship, so this is a big moment for Morgenstein as well. “He was one of my first athletes and we got to grow up in the sport together, we traveled all over the world together. I think that’s one of the things that makes Jason very special to me as a client.”

“[After Beijing] we weren’t sure about an apparel deal, he was doing a lot of speeches but the economy tanked within 60 days of the Beijing Games’ end,” Morganstein said. “We kept discussing whether or not we actually needed Jason in the water competing to do speeches, clinics, etc. We ultimately decided that Jason still had a passion, and that more than the money was why he decided that he was going to try and make the 2012 team. Winning an individual medal I think was a big part of it.”

Lezak would go on to win one more medal, a silver on the 400 free relay, to cap his career. He will now step away to impart decades of experience and wisdom with others through clinics, motivational speaking, and plans to start his own series of swim camps.

For all of his accomplishments, whenever anybody thinks the name “Lezak,” their mind will always go back to that one illustrious swim, that one moment, where he took down the mighty French. He’s become so pervasive that he’s even been verbified – if you get run down at the end of a relay, you’ve been ‘Lezak’ed’. Swimming seasons, swimming careers, are long and grueling. As a sport, we live for those incredible moments, at the end of a season, at the end of a quadrenial, at the end of a decade of work; those moments that give us chills in our spines and bring tears to our eyes. There’s no “running out the clock” in swimming. There’s no “kneeling” in swimming. Swimming lives, breathes, labors and dies for the kind of experiences that Lezak gave us all on that fateful moment.

Where were you when Lezak won gold?

Other than the 1980 US win over Russia in Olympic Ice Hockey, the 2008 “final leg” that Jason did in the 4×4 Men’s 100 relay was the most exciting moment I’ve ever witnessed in Olympic history. And I must say that the announcers helped with the excitement. I’ve watched that final leg uncountable times…

What a great career! I really wish he would have had one last shot in 2012 on the 4×100 relay. He swam a great split in the prelims and was only there for that event. But the US coach put LOCHTE at anchor! What? Lochte had miles on him already and the 100 is not his event. Lezak would have held off the Frenchies…he was older but fresh, and the 100 is his money event. Jason, you should have had one more shot at gold….but congrats on a great career and I will never forget 2008!

agnel was going past anyone in his way man

That swim in Beijing – amazing made one’s heart soar. Also proves that no matter how many floatation, smoothie, body squashing suits someone wears they will still get beat by a better swimmer.

He is a class act 100%. His swimming and his professional manner are gold medal worthy all the way. Total american hero in the swimming world. Phelps should have bought him a car for the swim…along with all his relay swimmers….awesome guy!

Whenever I feel down, or if I’m lacking motivation, I always remember that 400 free relay with Lezak. What a race! It gives me goosebumps just thinking about it!

I remember watching that race at home on our LCD HD TV, and when Jason jumped into the pool, and throughout the first 50, Rowdy kept on talking as if the race was already over. But after the turn, I noticed that Bernard was swimming closer to the side of Lezak’s lane and that Lezak masterfully had moved all the way to the edge of his lane in order to catch Bernard’s wake. I said to my wife, “It’s not over yet!”, and sure enough, Bernard got a little tired in the last 10 m and Lezak had an incredible finish! I think that although he was older than the average swimmer (32), in this case his experience really helped… Read more »

I don’t care what anyone says, that relay leg was the best ever.

Jason’s career and longevity in swimming is outstanding and him training alone is even more incredible and shows what great character in the sport he has; character and will power that essentially helped him swim that unforgettable anchor leg. His swim on the 2008 relay is probably the greatest moment in olympic history, not to mention a fine example of what being in a team means – without Jason Lezak there wouldn’t be 8 medals… I have to admit, every time I’m in need of a little inspiration I just watch that race.

As anonymous said above – you are the absolute coolest!

p.s. As an Israeli I’m incredibly proud he took part in the Maccabia games –… Read more »