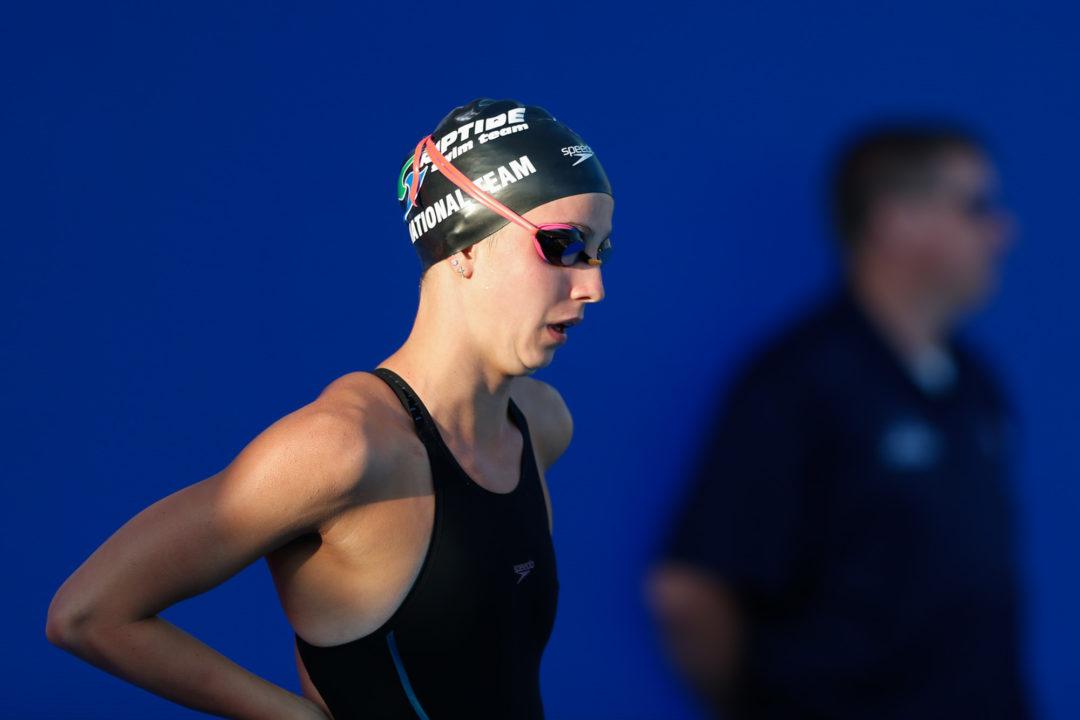 Regan Smith finished 3rd in the 100 back and took out her own World Junior and 15-16 National Age Group Records in the process. Archive photo via Tim Binning/TheSwimPictures.com

American 16-year old Regan Smith cleared at least one caveat off the World Junior Record on Saturday evening at the 2018 US National Championships. After swimming a 59.09 in prelims that was a World Junior Record but not her personal best time, Smith swam a 58.83 in finals to re-break her own record.

Her prelims time of 59.09 from the morning officially broke her own World Junior Record of 59.11, which she swam twice at World Juniors. Also at world Juniors, on a mixed medley relay leadoff, she swam 58.95 – but FINA doesn’t recognized mixed relay leadoffs for World Record purposes.

That 58.95 was recognized by USA Swimming, however, as a National Age Group Record.

But now Smith has gone under that time as well, meaning that she holds both the World Junior Record and the National Age Group Record in the 100 back. Missy Franklin’s 58.33 from when she was 17 is still the fastest-ever time by a swimmer in the right age bracket for this award, but it was done before FINA began recognizing World Junior Records, and thus is not an officially-ratified standard.

Because there’s a lot going on here, a summary:

Smith finished 3rd in the final behind Kathleen Baker, who swam a 58.00 World Record, and Olivia Smoliga, who was 58.75 for 2nd. Smith previously took 3rd place in the 200 fly and tied Baker for 1st in the 200 back, also in a World Junior Record. That 200 back qualified her for the Pan Pacs team, where  she’ll be able to swim any other individual races that she chooses.

15 year old Bacon is knocking on the door of that record as well and then she has Stadden to contend with as well. The backstroke events are deep with veterans and youth for years to come.

One heck of a competition this week for the Riptide Rocket!

Congratulations, Regan Smith, on an incredibly strong meet! Two top five world rankings in the 100/200 back and a top 10 world ranking in the 200 Fly. A Gold medal and two Bronze medals! Keep getting stronger and good things are in your future. I predict you’ll be even faster in Tokyo!
Hats off to Bacon, Stadden, Berkoff, etc. also. So much talent.