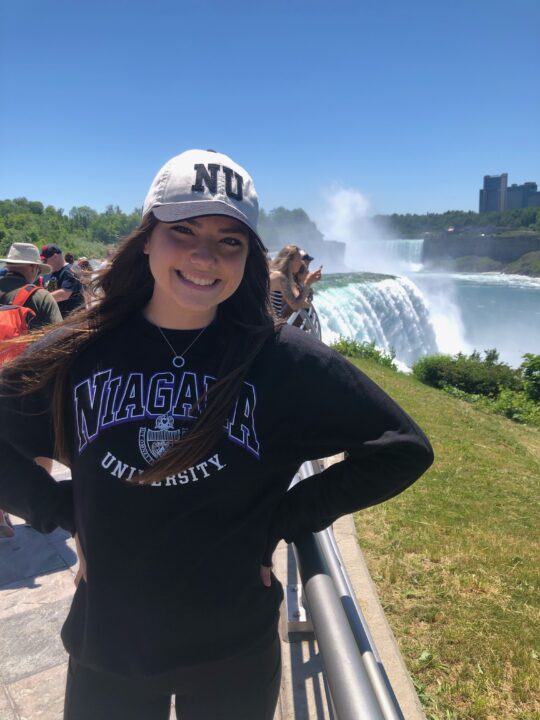 Rachael Gardner of San Jose, California has decided to move across the country to swim for Division 1 Niagara University in New York for the fall of 2022. Current photo via Rachel Gardner

Rachael Gardner of San Jose, California has decided to move across the country to swim for Division 1 Niagara University in New York for the fall of 2022. Niagara is an NCAA Division I school that competes in the MAAC.

“I’m extremely excited to announce my verbal commitment to further my academic and swimming career at Niagara University! I would like to thank my parents, coaches and teammates who have supported me through this process.”

Gardner is a rising senior at Santa Clara Senior High School. At the club level, she represents both Santa Clara Swim Club and De Anza Cupertino Aquatics, where she is a USA Swimming Futures qualifier. At the Futures Championships in Santa Clarita last month, Gardner contested the 100 breast, 200 breast, and 200 IM. Her highest finish came in the 200 breaststroke where she came in 65th overall in prelims.

At the 2021 MAAC Championships, Gardner would have won both the 100 and 200 breaststroke with her best times. She also would have placed 5th overall with her best time in the 200 IM and would have provided a substantial boost to Niagara’s relays. In the 400 medley relay, Niagara placed 3rd overall, but substituting Gardner’s best time in for Kreger’s breaststroke split (1:07.23) would have improved their final time by 2 seconds to move the team into 1st place. Niagara ultimately placed 3rd overall at the meet with a total of 498 points, while Iona College took home the team title with 735 points.

Gardner is set to join Madelyn Hudson in the Niagara University class of 2026.

You should change that.

She represents DACA and left Santa Clara. You can’t represent both teams.