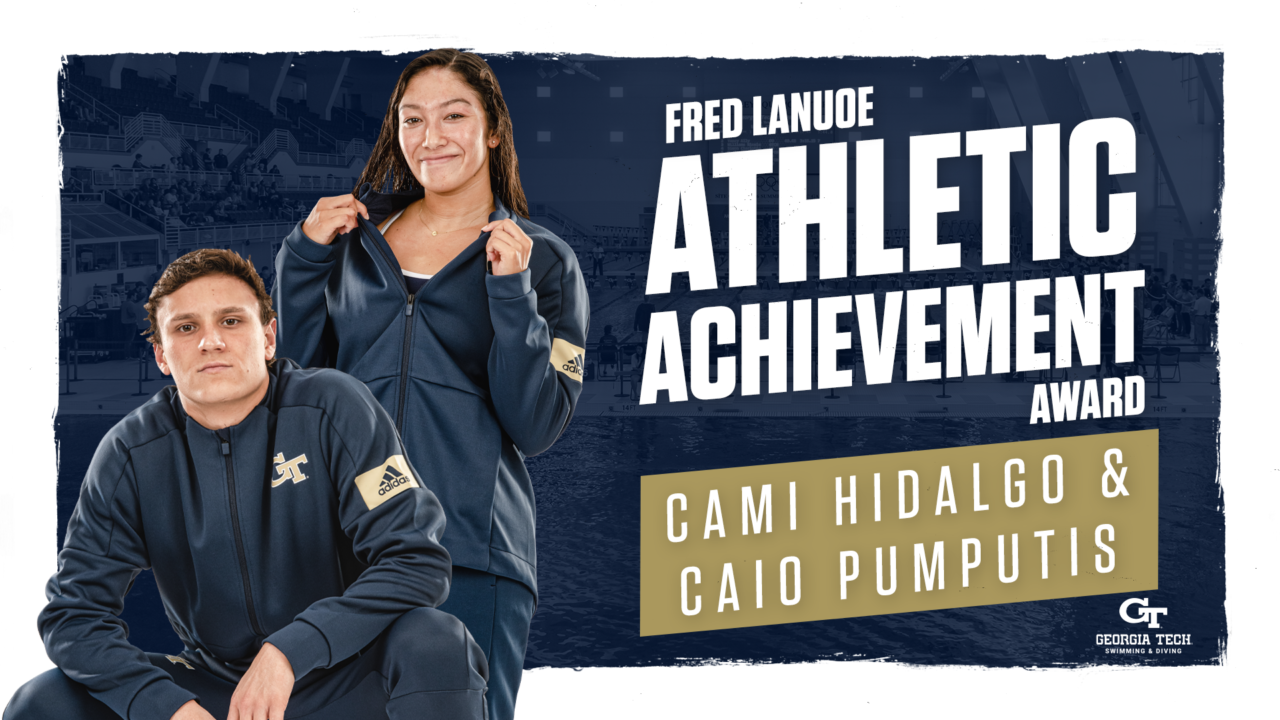 Caio Pumputis and Camryn Hidalgo won the the Fred Lanuoe Award, given to the student-athletes who bring the highest recognition to the Institute. Current photo via Georgia Tech Athletics

THE FLATS — Georgia Tech swimming and diving concluded on Friday the announcing of its 2019-20 team awards.

FRED LANUOE ATHLETIC ACHIEVEMENT AWARD
The most prestigious award handed out by the team, the Fred Lanuoe Award is given to the student-athletes who bring the highest recognition to the Institute, through their outstanding athletic achievements. The 2019-20 winners are Caio Pumputis and Camryn Hidalgo.

SHILO AYALON MOST VALUABLE PERFORMER AWARD
This award is presented in recognition to the student-athletes that performed consistently, throughout the season, at the highest level of athletic achievement and contributed to the overall success of the Georgia Tech swimming and diving team. The 2019-20 winners are Caio Pumputis and Emily Ilgenfritz.

CHAPMAN/HILES MOST IMPROVED AWARD
Named after John Chapman and Johnny Hiles, this award is given to the student-athlete with the greatest athletic improvements throughout the year of competition. The 2019-20 winners are Carrie Lee and Kyle Barone.

TOMMY TOWLES SCHOLAR-ATHLETE AWARD
This award is presented to the student-athletes who possesses the highest level of performance, scholarship and leadership in making Georgia Tech a better Institution and swimming and diving program. The 2019-20 winners are Allie Paschal, Catriona MacGregor and Kyle Barone.

J. HERB MCAULEY FRESHMEN UNITY AWARD
Named after longtime coach J. Herb McAuley, this award is given to the student-athlete who exemplifies the standards of leadership and team unity through their personal actions in and out of the swimming and diving pool. The 2019-20 winners are Abby Cohen and Daniel Kertesz.