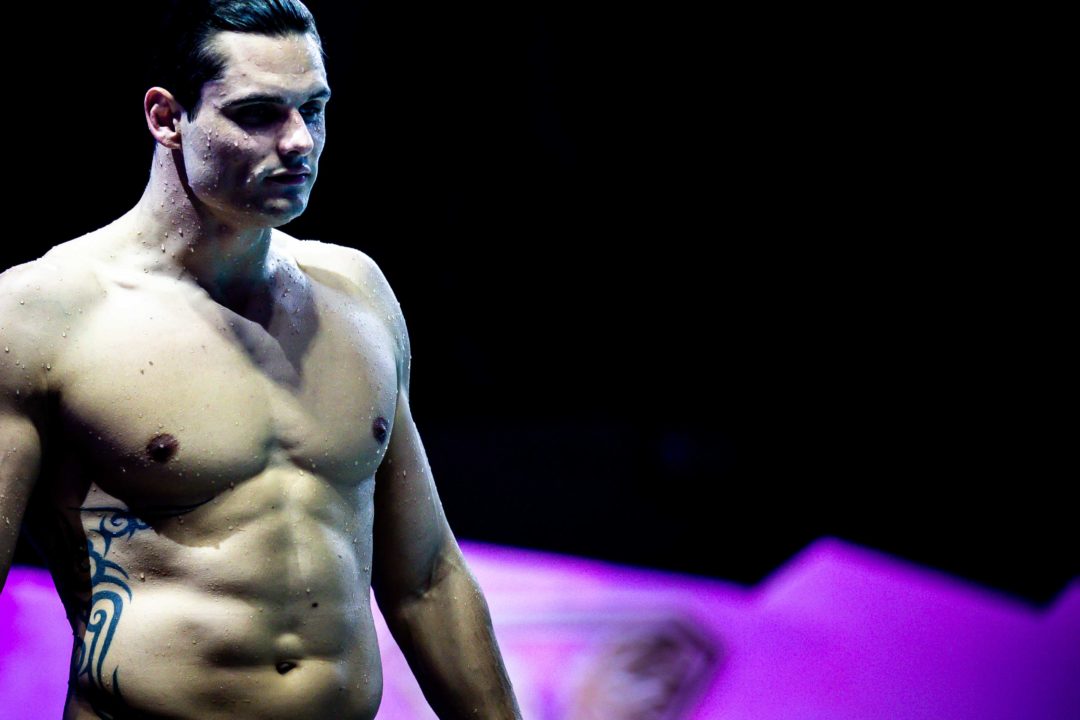 We'll get a taste for where the men's 50m free speed is at with Florent Manaudou, Bruno Fratus, Ben Proud and more racing in Luxembourg. Archive photo via Jack Spitser/Spitser Photography

This week’s marquee international swimming competition is the Euro Meet, set for January 24th-26th in Luxembourg. The annual event typically draws elite Olympic and World Championships talent from around the globe, with the 2020 edition being no different.

We’ve reviewed a handful of stars who have already committed to the meet, but now that the start lists have been published, we’re getting a better look at the match-ups to which spectators will be treated t Centre National Sportif et Culturel d’Coque this weekend.

Hungary’s Iron Lady Katinka Hosszu will be seen multiple times over the course of the meet, including being pitted against the likes of Italy’s Ilaria Cusinato and Great Britain’s Hannah Miley in both IM events.

In the longer IM’s field, 17-year-old Michaella Glenister will get an opportunity to hold her own, following up on the 400m IM bronze medal the Brit produced at the 2019 World Junior Championships.

Hosszu also leads the women’s 200m fly, which will see Cusinato, along with fellow Hungarian Liliana Szilagyi among the competitors. One of a small remaining core swimmers still training with Shane Tusup, Szilagyi topped Hosszu this past weekend in the 200m fly at the FINA Champions Series in Beijing.

Swedish Energy Standard team member Sarah Sjostrom is set to compete across her bread-and-butter sprint free and sprint fly events, but is also trying the 50m backstroke on for size.

Although not unheard of, Sjostrom’s racing the 50m back is a reltatively are occurrence. She contested the sprint at the Swedish Championships in June of 2019 where she notched a time of 28.52. She had previously raced the event at 2019’s Euro Meet, clocking a time 28.66 a year ago. She owns the Swedish NR with her lifetime best of 27.80 from 2017.

Sjostrom will see Danish Olympian Pernille Blume join her in the 50m fly event, along with French teen Naele Portecp and her veteran teammate Charlotte Bonnet. Sjostrom and Blume are also set to spar in the 50m free sprint.

On the men’s side, a huge showdown is in store in the men’s 50m fly, as British World Championships medalist Ben Proud and Ukrainian World Record holder Andrii Govorov are both entered in the event. They’ll be joined by fellow studs Florent Manaudou of France, Sergii Shevstov of Ukraine, as well as Jeremy Stravius of France, just to name a few in the field.

Brazilian mainstay Bruno Fratus will meet up with Proud and Manaudou in the 50m free, with Germany’s 17-year-old national record holder Artem Selin and Great Britain’s World University Games gold medalist David Cumberlidge joining the party. Selin took the European Junior Championships gold medal last year in a time of 21.83, while Cumberlidge also got under the 22-second threshold, stopping the clock in 21.87.

Sprinkled throughout the events is a young subset of the British competitors, including European Junior champion Matthew Richards. Richards has shown his prowess across the sprint free and fly events, taking down British age records left and right.

Versatile Italian youngster Thomas Ceccon is sticking to a relatively smaller schedule, entered in just the 100m free, 100m back and 100m fly. A multi-medalist at the 2018 Youth Olympic Games, the 18-year-old went on to collect 5 European Junior Championships medals last year in Kazan, including individual golds in the 50m and 100m backstroke.

Ceccon’s teammates Nicolo Martinenghi, Fabio Scozzoli and Luca Dotto are set to race this weekend as well, with the former pair just having wrapped up the Geneva International Challenge in Switzerland last weekend.

Marco Koch was also entered in the Geneva Challenge but wound up not swimming. His name appears on these entry lists here, so we’ll see if he is able to make the trip and get more racing under his belt.

Finishes in individual and relay events (open age only)

Just curious, who do you guys think would win if it was an actual sparring session? My bets either on Manaudou or Proud.

I’d probably take 8 Ben Prouds over 8 Florent Manaudous in a tug of war, or arm wrestling. But, sparring requires more agility, and there I’d give the edge to Florent “handball” Manaudou.

Good question, but I’d add Kyle Chalmers to the play, the man is a tank!!

Too easy: Jacob Rambo (always reading carefully the entry-lists..)
More seriously: among the youngsters I’d cite two Ukrainian swimmers: 17 year-old Bukhov, World Junior Champion in the 50 free, and the 15 year-old breastroker Kryzhanivskyy (Rambo is an easier name to write..) winner at last year’s Eyof in the 100 breastroke (1.02.36) and silver medalist in the 200 breastroke (2.16.60).

Kryzhanivskyy went under 1.02 a couple of months ago too. Looks precocious.

Is Manaudou easier to write? Kryzhanivskyy is as simple to pronounce as Manaudou. Once you hear it you will have no problem to repeat.

Always a good meet to see early season form from a lot of different athletes. Should be some great competitions.