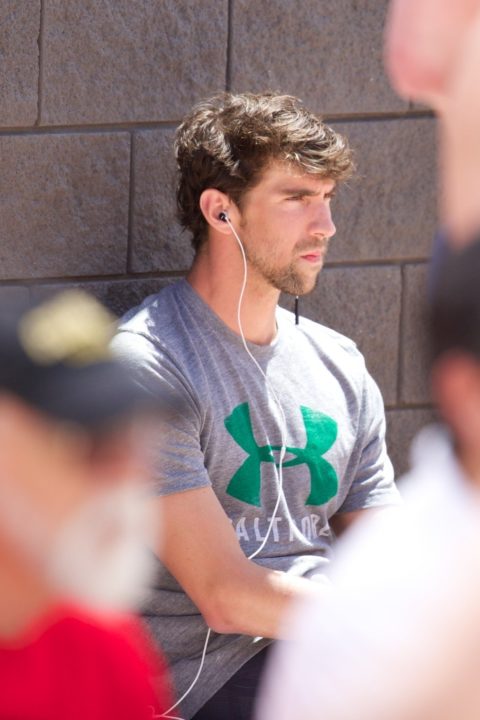 There are game faces….and then there is Michael Phelps‘ game face. Some 10 hours after swimming in the semi-finals of... Archive photo via Mike Lewis/Ola Vista Photography

There are game faces….and then there is Michael Phelps‘ game face.

Some 10 hours after swimming in the semi-finals of the men’s 200 fly on Monday evening at the 2016 Rio Olympic Games, American swimmer Michael Phelps, who with 23 medals and 19 gold medals is the winningnest Olympian in history, is still trending nationally on Twitter. The attention is not for his performance in the pool; rather, the focus is on his performance in the ready room, where during preparations, with chief rival South African Chad le Close preparing in front of him, Phelps made a face that would make tar melt off a driveway.

NBC analysts Rowdy Gaines and Dan Hicks were infatuated with the moment, and it’s a moment well deserving of the attention given the history of the swimmers in this angle. In 2012, Le Clos, then a young upstart, knocked off Michael Phelps in this event, both swimmers’ pet event across their careers, for the gold medal. Since then, the two have traded barbs in the media, including last summer when at different meets in the same week they swam season-best times within a tenth of each other.

After his race, Phelps said he was thinking “nothing,” he was trying not to look at Le Clos, and that he was watching the heat in front of him.

While Phelps stepped away from the pool for a time after the 2012 Olympics, he didn’t step away from his #phelpsface…see this shot from the 2013 World Championships, thanks to our amigos at SwimNerds:

Imagine walking in the ready room for your 200 Fly against MP and seeing that staring back at you.

Phelps face is too gentle to be mean looking…anyway angry faces in swimming is more amusing..it’s not like you’re in danger from physical contact in other sports. Phelps is the best of all time though.

My favorite part about that was when he was puching his other hand lol maybe pretending it was phelps, i think chad wanted phelps to let off steam in that swim so he d be tired for tonight, but luckily the goat didnt give in

Michael Phelps, the entire US nation is begging you……please throw the hammer down and shut Chad le Clos up.

And so does France !

Canada hereby joins in solidarity with Phelps as well!

All of Africa too, because we don’t want to piss of USA. Please keep sending those t-shirts of the losing Super Bowl team!