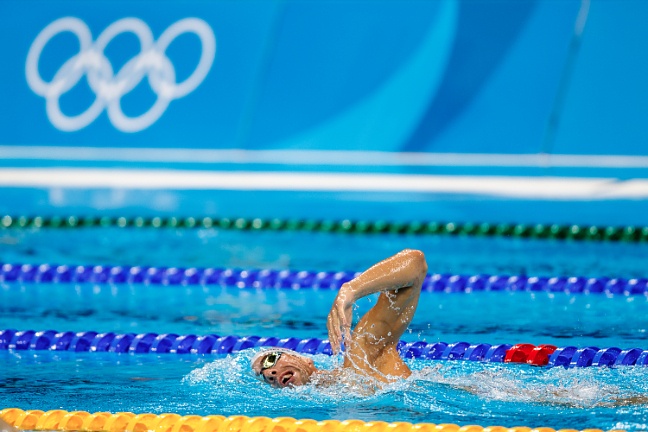 Michael Phelps has made a compelling case to swim in the final of the men's 4x200 free relay. Current photo via Rio2016.com

After registering the 4th fastest split in the entire field in the men’s 4×100 freestyle relay on Sunday, helping the Americans to gold in the event for the first time since 2009, the question arose: will Michael Phelps swim on the men’s 4×200 free relay?

He certainly makes a compelling case.

Phelps initially wanted to post a time fast enough to have him considered for this relay back in early June at the Longhorn Elite Invite, but ultimately failed to do so going just 1:48.73 in Austin.

After completely scratching the 200 free at the US Olympic Trials, many questioned whether or not Phelps would contest this relay in the Olympic final, one he has been apart of since 2002 for the Americans.

After his 47.12 split in the 400 free relay, there’s no question Phelps is on good freestyle form; and good form in general. Is there anything that could keep him off this relay?

The main issue is that the men’s 4×200 free relay final tonight is about 70 minutes after Phelps’ 200 fly final. A double we’ve seen him handle easily in the past, is that enough time for the 31 year-old Phelps to recover and put in a competitive 200 free? I believe it is.

Phelps has raced multiple times in sessions throughout his comeback, though he has tried to avoid doing it at the biggest meets. The fatigue during the race is the only real worry; not necessarily the fatigue throughout the rest of the meet. He has only the 200 IM prelims and semis on Wednesday, an event he can cruise into the final easily with.

At the end of the day, there’s no question whether or not Phelps will show up for his country if given the opportunity, and if he’s not the team will still be the favorites for gold. It all comes down to the coaches, but there’s no doubt he’s made his case.

A Phelps addition to the final would put Trials 3rd and 4th place finishers Jack Conger and Ryan Lochte into the prelims for sure, along with Gunnar Bentz and Clark Smith who finished 5th and 6th.

If they weren’t going to use Phelps they could’ve done something like, say, let Lochte rest until the final and put someone else in the prelims. Maybe Townley Haas, who won Trials but is over ten years younger than Lochte, or someone like Blake Pieroni, who qualified in the 400 free relay but would no doubt get the job done here.

Though it may be tempting to sit the veteran Lochte until the final, his 4th place finish at Trials didn’t grant him that opportunity. He has yet to race at these Games, so the fatigue factor with him shouldn’t be much of a concern.

He’ll have to be careful though, because if the relay turns out the way it looks like it may, and one of the three prelim swimmers goes faster than Lochte in the heats, he could find himself in the crowd come the final.

I have a feeling that Phepls will not swim the 4x200m replay and he will focus on 200m fly. Without Phelps, the line-up with Haas-Lochte-Conger-Dwyer can win. But Phelps is the GOAT and everything is possible!!! Let’s see!! 🙂

Would love to see him leadoff and get under the cheater’s gold medal time from last in the individual event (1:44.65)

If Phelps is chosen to be in the final team, he should be the anchor leg so he can have the most resting time, but the coach has to be sure he can swim under 1:46 at least after 200 fly final.. Also I think Ryan should be chosen in the final team and leadoff as well, His underwater skills can definitely bridge the gap from the other strong team..

US can win without Phelps. He needs to take down Le Clos in both the flys.

Le Clos isn’t his main concern…it’s definitely the Hungarians …He openly admitted that the 2 Hungarians finish off that race so well and he needs to see where he can improve on ….said that on Aussie TV

I agree, don’t think either Phelps or Le Clos showed too much in the semi.

yeah too bad they don’t get to swim that one again tonight…the USA is the only country that can afford to play with their prelim line-up and be safe to make it into finals.

Phelps will not swim the relay…I hope. Team USA will get it done without him and Michael will have his hands full with the young Hungarian and Le Clos. Le Clos will be a different animal tonight with no 200 free one hour before the 200 fly final. Las Vegas is NOT picking Phelps to win this event FYI.

Who is Vegas picking? I think Cseh is the biggest threat. He saves so much energy by single-kicking for the first three laps, without losing speed. I think Phelps will have to be out fast and hold on; as in 2012 but this time with better conditioning, more front-end speed, and a better finish. The younger Hungarian is great but I’ll be surprised if he goes more than a few tenths faster than last night.