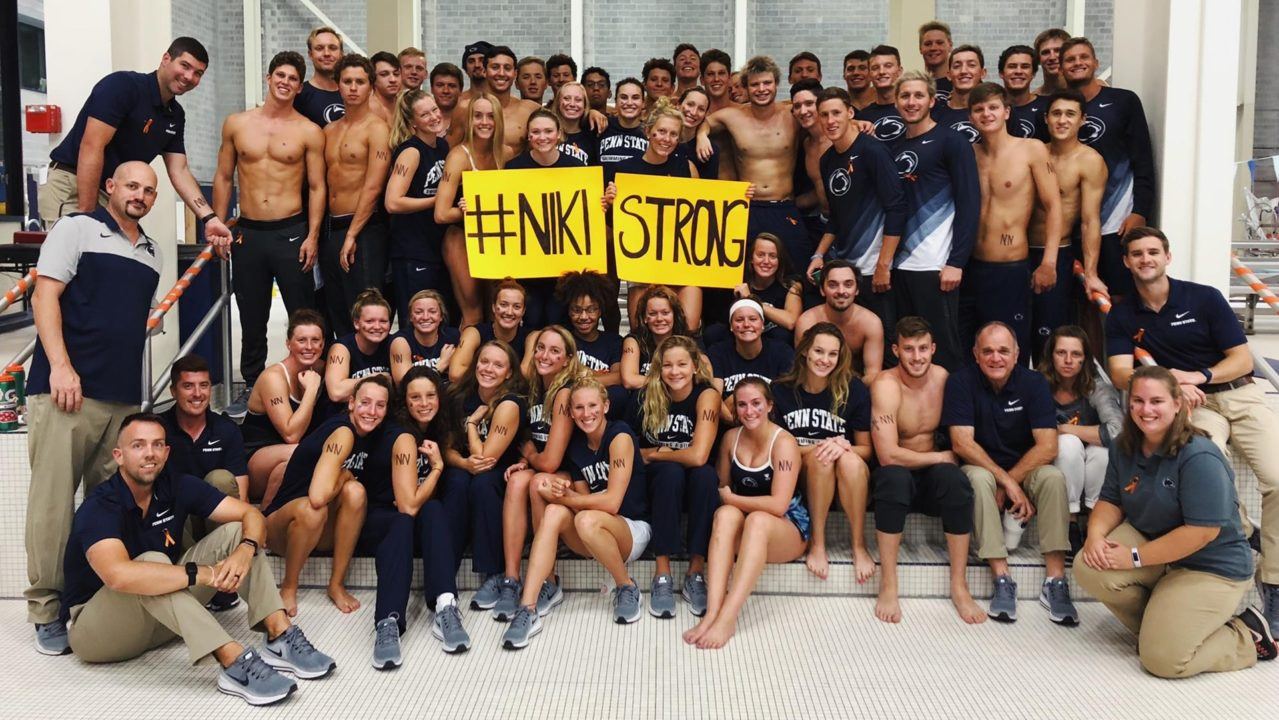 UNIVERSITY PARK, Pa. – Penn State Intercollegiate Athletics has launched a fundraiser to support freshman women’s swimmer Nikolette Nolte (Lenhartsville, Pa.) and her family for costs associated with her leukemia treatment. Any surplus funds will be donated to THON and the Jessie Rees Foundation to help others facing pediatric cancer.

Nolte, who fought and defeated lymphoma in high school, was diagnosed with cancer for a second time in September, just a few weeks after arriving at Penn State to begin her academic and athletic career with the Nittany Lions. She is now battling leukemia and was hospitalized for 32 days before returning home Tuesday, and is facing a lengthy treatment process.

“I have been overwhelmed by the support and love I have received over #NikiStrong,” said Nolte. “It has put my family and I at a loss for words. I cannot thank my Penn State Swim Family enough for showing me so much love. We are, forever and always.”

Those wishing to donate to support the Nolte family can do so at the #NikiStrong GoFundMe page at http://gopsu.info/nikistrong.

The fundraiser will be overseen by the Penn State compliance staff. In accordance with NCAA rules, funds will be distributed to the Nolte family for documented treatment-related expenses and any excess funds will be donated to THON and the Jessie Rees Foundation.

“When we were recruiting Niki, she just had a presence about her, that after her visit here to Penn State for a recruiting visit, we looked at each other and we said, ‘We want this kind of kid on our team,’” said head coach Tim Murphy.

“I’m very proud of my team’s response to the situation. It tugs at their heart a little bit, needless to say. They’ve taken it upon themselves to reach out to the swimming community to try to show Niki the support that she has, not only from within Penn State, but outside and that’s took on a life of its own, which has been really cool. I’ve spoken to Niki and her parents and they’re just really grateful and appreciative of the support from everyone. Anything we can do to pick up her spirits and get her back here and get her back in the water, which I know she’s chomping at the bit to do.”

THON is a student-run philanthropy committed to enhancing the lives of children and families impacted by childhood cancer. Our mission is to provide emotional and financial support, spread awareness and ensure funding for critical research – all in pursuit of a cure.

Every year, THON’s efforts culminate in a 46-hour no sitting, no sleeping dance marathon. Since 1973, THON has grown from a 78-person marathon in a small gymnasium to the world’s largest student-run philanthropy, engaging over 16,500 student volunteers. These committed students dedicate over 5,000,000 hours to supporting THON’s efforts in finding a cure to childhood cancer.

Approximately 16,000 children are diagnosed with cancer each year and THON, through a partnership with Four Diamonds, is working to change that. THON partnered with Four Diamonds in 1977 and since then, has raised over $146 million in the fight to end childhood cancer. The funds raised by THON have helped to cover treatment costs for more than 4,000 children and supported the growth of innovative research which reaches beyond the boundaries of Pennsylvania to touch the lives of families affected by childhood cancer everywhere.

About the Jessie Rees Foundation

In 2011, 12 year-old Jessie Rees created and stuffed more than 3,000 JoyJars herself during her 10-month fight against an inoperable brain cancer (DIPG). Jessie passed away in January 2012, yet the Foundation she started continues her mission to care for and encourage kids fighting cancer to NEGU: Never Ever Give Up, by distributing more than 200,000 JoyJars to kids fighting cancer across the US – in every state, plus 33 other countries. The Jessie Rees Foundation has provided Jessie’s JoyJars to kids fighting cancer at no cost to hospitals or the recipients, and is completely funded through private and corporate donations. For more information, please visit http://www.negu.org