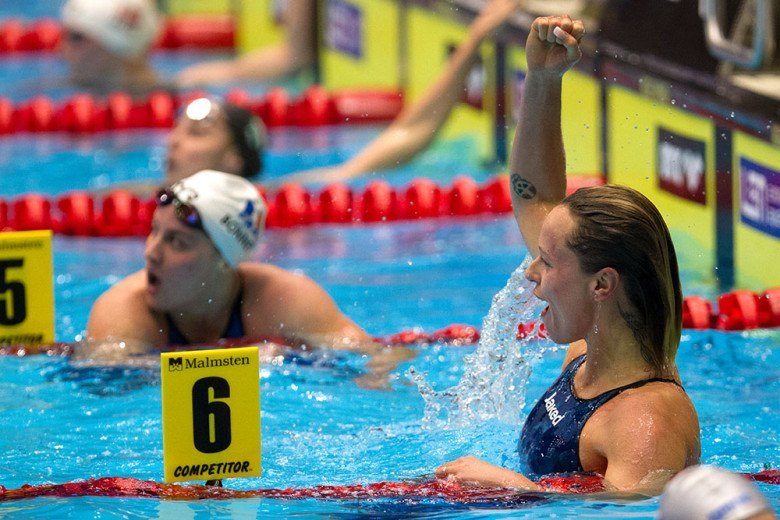 Federica Pellegrini posted a 1:55.00 which is the fastest time she has swam since setting the world record in 2009... Current photo via Jesper Nielsen | www.sttfoto.dk

Italian Federica Pellegrini started off the first night of the French Open in Vichy in style winning the women’s 200 freestyle in a time of 1:55.00. Pellegrini’s time ranks her third in the world behind Femke Heemskerk and Sarah Sjostrom.

Pellegrini’s season’s best is a 1:56.51, which she recorded at the Italian National Championships in April. This is a significant swim for the Italian world record holder as it is the fastest time she has swam since setting that record in 2009. Her next fastest performance was in Barcelona when she finished second to Missy Franklin at the 2013 World Championships.

Pellegrini did win the event at the European Championships in Berlin albeit in a time of 1:56.01.

Hungarian Katinka Hosszu started off her more than busy weekend collecting the silver in the event hitting the wall in a time of 1:56.11, not far off her season’s best of 1:55.89. Charlotte Bonnet of France finished third in a time of 1:57.64 followed by her French teammate Coralie Balmy who posted a 1:58.87.

Francois Heersbrandt of Belgium finished fourth in a time of 23.80 followed by Frederick Bousquet of France who recorded a time of 23.86.

South African Cameron van der Burgh continues to prepare himself for the difficult task of trying to snatch the world record back from Adam Peaty of Great Britain. Van der Burgh’s season’s best is a 27.01, which ranks second in the world next to Peaty.

In Vichy van der Burgh took the event in a time of 27.09. Slovenian Damir Dugonjic, who ranks fifth in the world, grabbed the silver in a time of 27.44 followed by George Bovell of Trinidad and Tobago who posted a 27.57.

Italian Fabio Scozzoli finished in a time of 27.60 followed by South African Giulio Zorzi (27.65) and Giacomo Perez Dortona of France (27.72).

Fran Halsall of Great Britain won the women’s 50 freestyle in a time of 24.65. In 2014 Halsall won the gold in the 50 freestyle at both the Commonwealth Games and the European Championships along with finishing the year with the world’s top time of 23.96. She will be looking to repeat the success she had last summer in Kazan.

Hungarian Katinka Hosszu dominated the women’s 200 IM taking the event in a time of 2:10.22 over three and a half seconds ahead of Viktoria Zeynep Gunes. Gunes collected the silver hitting the wall in a time of 2:13.93 followed by Fantine Lesaffre who finished in a time of 2:15.66.

Hosszu won her second event of the evening taking the 200 backstroke in a time of 2:09.54. Margherita Panziera finished second in a time of 2:11.94 followed by Daryna Zevina of the Ukraine who posted a 2:12.20.

German Marco Koch crushed the field in the men’s 200 breaststroke. Koch won the event in a time of 2:08.98 almost five seconds ahead of Lennard Bremer of Australia who finished in a time of 2:13.93. Koch will be looking to follow up his European Championship win with a a gold in Kazan. In 2013 the German finished second to Hungarian Daniel Gyurta.

Viktoria Zeynep Gunes of Turkey took the women’s 100 breaststroke in a time of 1:08.50 just missing her lifetime best of 1:08.30 which she posted at Sette Colli in June. Gunes was able to get her hand on the wall just ahead of American Laura Sogar who posted a season’s best 1:08.56.

Italian Giulia De Ascentis earned the bronze in a time of 1:09.13.

Rachael Kelly of Great Britain took the women’s 100 butterfly in a time of 58.67. She was followed by Marie Wattel of France who recorded a 58.87 and Kimberly Buys of Belgium who finished in a time of 59.40.

Jan Switkowski of Poland won the men’s 200 butterfly in a time of 1:56.55, more than a second away from his season’s best of 1:55.23. Switkowski and German Markus Gierke were the only two men under the two minute mark. Gierke took the silver in a time of 1:57.61.

Jonatan Batcha of Israel finished third in a time of 2:01.22.

Georgia Davies of Great Britain out swam her teammate Halsall to reach the wall first in a time of 27.95. Davies, who won the Commonwealth Games last summer, was just off her season’s best of 27.87 which ranks sixth in the world. Halsall finished second in a time of 28.20 followed by Alicja Tchorz of Poland who posted a 28.66.

After posting a 48.77 in the prelims Florent Manaudou decided not to participate in the final. That left the door open for fellow Frenchman Mehdy Metella to win the event in a time of 49.01. Pawel Korzeniowski finished second in a time of 49.21 followed closely by Shinri Shiouria who earned the bronze in a time of 49.25.

Two Slovenian women went one two in the women’s 800 freestyle. Tjasa Oder took the event in a time of 8:42.47 followed by Gaja Natlacen who posted a 8:44.87. Ophelle-Cyrielle Etienne collected the bronze in a time of 8:45.54.

Great time for the Lioness!
I am worried about Cielo. Is not a common occurrence for him to swim a final time slower than a preliminary(23.44×23.42). I hope he stays away from Kazan omen.

Never count the Lioness out! 😀

She looked amazingly surprised in her post-race interview with Alain Bernard, considering the huge heat wave conditions there and the big training sessions she had before the meet.
Clearly Pellegrini is a gold medal contender at worlds in that event with Missy Franklin and a few other girls.
Great final in perspective. Perhaps the women’s final of the championships.

I agree. That race is so hard to call right now. Definitely going to be one of the highlights of the meet.

Twice as competitive as the men’s race

The event on the men’s side is anyone’s race to win. Just not as fast as we would like to, though

I expressed myself poorly. I meant to say that all the big shots will be there, unlike in the men’s race, and that the winning time is going to be something special