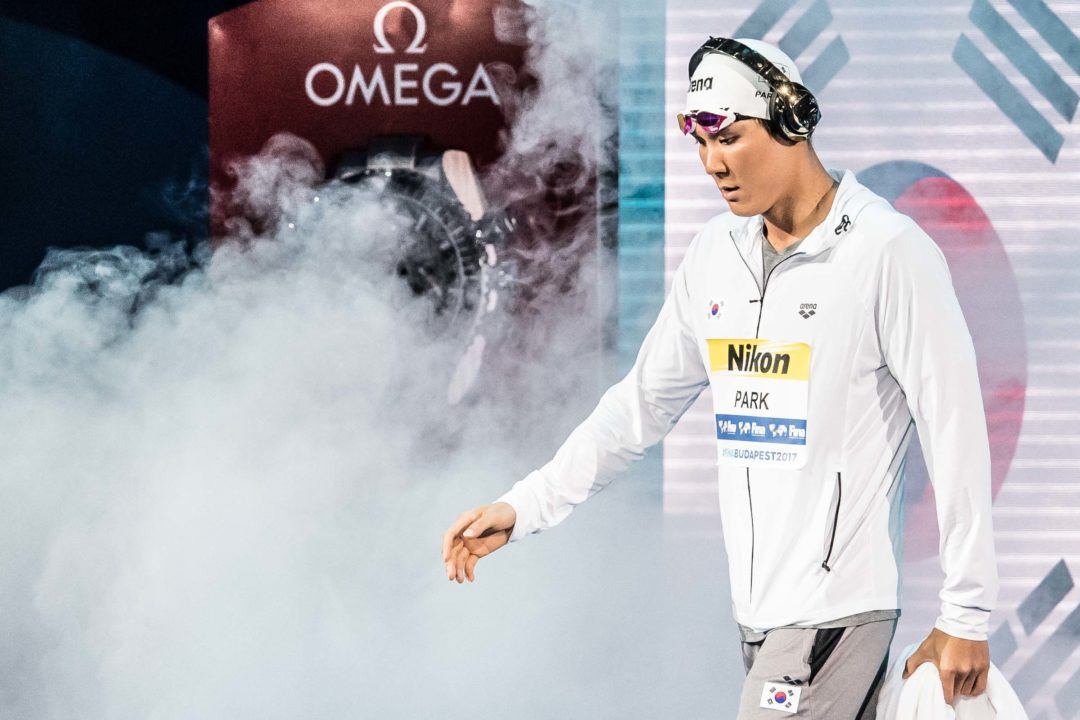 "It's a privilege to be an honorary ambassador for the world championships held in my home country," Park Tae Hwan said today. Archive photo via Mike Lewis/Ola Vista Photography

With this year’s FINA World Championships now done and dusted, eyes are already looking ahead to the 2019 edition of the event set to be held in Gwangju, South Korea on July 12th – 28th. The city is situated about 220 miles (350 km) from Seoul, where two famous host country swimmers were just announced as official ambassadors for the competition.

Park Tae Hwan, South Korea’s Olympic champion in the 400m freestyle back in 2008, and rising star An Se Hyeon were introduced today as honorary ambassadors for the 2019 World Championships.

Along with his gold in Beijing, Park earned silver in both the 400m and 200m freestyle events at the 2012 Olympics in London. Most recently at this year’s World Championships, Park finished 4th in the 400m, 8th in the 200m and 9th in the 1500m freestyle races.

For her part, An made the finals of both the 100m and 200m butterfly races in Budapest, with her 4th place finish in the latter representing the best result ever by a South Korean woman at a major international competition. She holds 3 national records across the fly events.

“It’s a privilege to be an honorary ambassador for the world championships held in my home country,” Park said. “I’ll try to ensure the success of this competition.”

“I’d like to thank the organizers for naming me an honorary ambassador,” An said. “I thought about what I could do to promote this event, and I think my job is to continue to do well in all competitions.” (Yonhap)

So now we have PED users acting as ambassadors for World Championships.
We are telling the world of swimming that it is perfectly fine for you to be tested positive for steroids or PED’s. You’ll have a minimal ban and then you’ll be able to act as an ambassador for a major international meet..
Well done FINA, Well done WADA….

The world has gone mad. I’m glad to see that there a few Sane people left on this earth.

Just another FINA blunder, one of many, they are a disgrace!