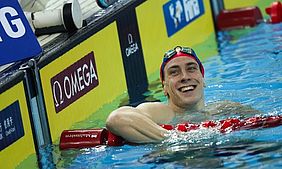 Heiko Gigler grabbed two golds so far at the Austrian National Championships over the weekend, with more swims to come from Graz. Archive photo via ATUS Graz

Straight off of the inaugural 4 Nations Meet, which took place in Budapest, Hungary last weekend, Austrian swimmers headed home to Graz to compete at the Junior & Senior National Championships.

Combining elite talent with age group swimmers, the championships cover 5 days, implementing coronavirus-related protocols all the while. In fact, organizers state that ‘due to the change due to COVID-19, the women’s 1500m free, the men’s 800m free, and all relay competitions have been eliminated from the program.’

Additionally, the competition is being held sans spectators, with only the competitors set to race in those events during the particular sessions able to enter the swimming hall.

Through two days of competition, 24-year-old Heiko Gigler reaped two golds, taking the 50m fly and 100m free events. In the former, Gigler produced a time of 24.15 to easily defeat the field, while in the latter he notched a winning effort of 49.69 to clock the only sub-50 effort of the competition.

Gigler put up a 100m free time of 49.39, a lifetime best, in the semi-final of the 2019 World University Games (Summer Universiade) last year in Naples, Italy before ultimately finishing 7th in the final with a time of 49.52. As such, his time of 49.69 here in Graz falls as #6 on his personal all-time list.

Felix Auboeck, the man who notched a new Austrian national record in the men’s 200m free at the aforementioned 4 Nations Meet, topped the men’s 1500m free podium here in a time of 15:37.69. Well off his own national record of 15:01.18 from the 2016 German Championships, Aubeock still got the job done to clear the field by nearly 15 seconds.

In Budapest last week, Loughborough-bound Auboeck fired off a winning 1500m mark of 15:07.22. That checked in as the former Michigan Wolverine’s 4th fastest time ever.

17-year-old Lena Grabowski brought her A-game once again, producing a time of 2:10.56 in the women’s 200m back to get to the wall about 6 seconds ahead of the pack. Grabowski owns a lifetime best and national record mark of 2:10.06 from last October and this effort represents the 5th fastest of her career.

Valentin Bayer, the man who notched a new Austrian standard in the men’s 100m breast last week in Budapest, doubled up with another impressive outing here. Last week Bayer posted a mark of 1:00.27 to write his name into the Austrian swimming history books and the 20-year-old was within half a second of that outing with a 1:00.46 here.

A big-time swim came from Cornelia Pammer in the 100m freestyle, as the 20-year-old powered her way to a huge lifetime best of 55.60.

Before this meet Pammer had never before been under the 56-second barrier, owning a previous PB of 56.08 from just week. Before Budapest, Pammer’s fastest was represented by the 56.64 she logged for 10th place at the 2017 European Junior Championships.