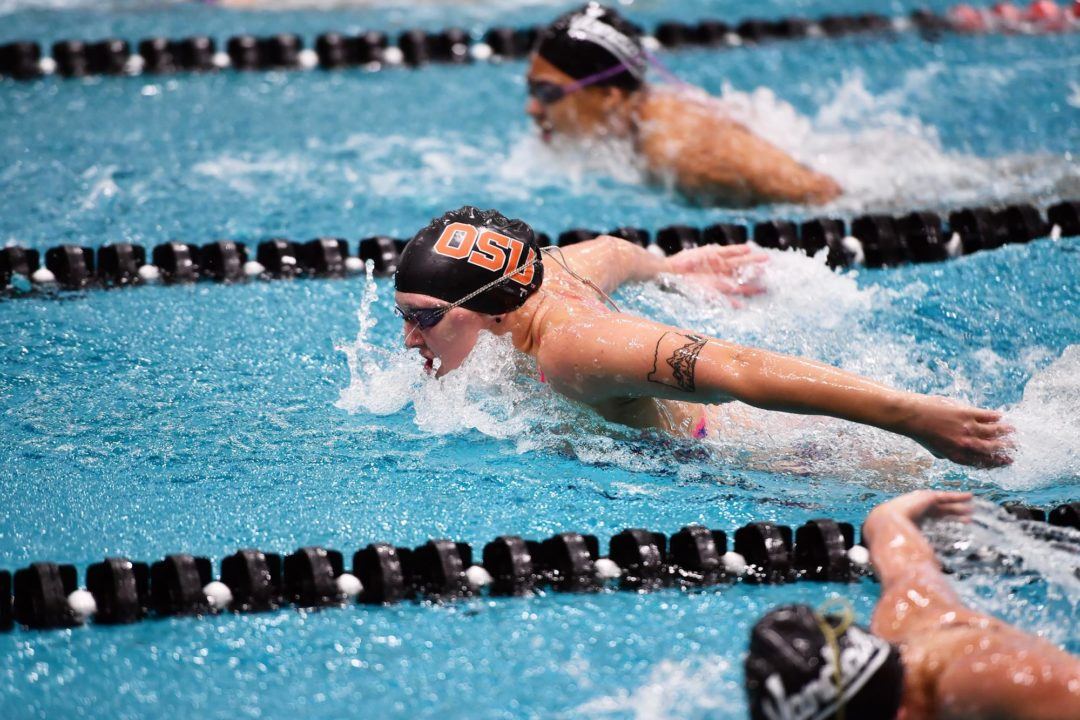 Oregon State ended their home season with a 159.5-96.5 win over the University of Idaho Vandals in front of an Osborn Aquatic Center packed with the Beaver faithful. Current photo via Oregon State Athletics, Dave Nishitani

CORVALLIS, Ore. – Oregon State ended their home season with a 159.5-96.5 win over the University of Idaho Vandals in front of an Osborn Aquatic Center packed with the Beaver faithful.

“It’s so great to have amazing support at our meets,” Felicia Anderson said. “We love our fans helping with things like our relay chants and pre-meet chants. It just really helps to calm the nerves to know that we have all of these fans out here for us.”

The Beavers set the pace early, picking up first and third place finishes in the 200 medley relay and the 400 IM to take a 27 to 9 lead into the first break.  Freshman Lauren Yon took the individual event win in the 400 IM with a time of 4:32.40.

“When I go into a race I try to remind myself that it’s for the team and not an individual thing,” Yon said. “I was just trying to put us in the best position as a team and I was happy with all of my races today.”

In events 3-8 the Beavers finished out in front four times with four different swimmers. Kristina Schneider got it kicked off with a first-place finish in the 200 free with a time of 1:54.26 followed closely by Felicia Anderson leading the way in the 100 back with a time of 56.09. Arianna Letrari and Lindsay Swail sent the Beavers into the second break with first place finishes in the 200 fly (2:07.31) and 50 free (24.30) respectively.

“I think we preformed much better on the second day than we did when we were down in Southern California a few weeks ago,” Beaver head coach Jennifer Buffin said. “We had a plan and knew how we needed to show up and race. We did a good job executing on our races.”

Before the final break the Beavers took three more first place finishes. In front of a cheering team Kristina Schneider and Felicia Anderson both won their second event of the day in the 100 free and 200 back respectively. Cali Rowland sent the Beavs into the final break with a win in the 200 breast.

“I felt pretty good about my races, I think I performed better today than yesterday for sure,” Anderson said. “(Back to back meets) are hard. It’s a difficult set up to compete in. You have to stay positive and focus on one race at a time.”

Arianna Letrari powered the Beavers to a strong team finish with back to back event wins in the 100 fly and the 100 IM.

After a full season of support the stands at Osborn were again filled to the brim with orange and black.

“(Building a community) has been a big part of what we have tried to do so far since I have been here, and I love to see how our fans and the community supports us,” Buffin said. “Everybody, from the fans to the support we get from every branch of the athletic department, has had a big part in helping us grow this program and we couldn’t do it without them.”

Idaho women’s swimming and diving split up for the final weekend of the regular season. The divers competed at the Lumberjack Spring Diving Invitational, led by Janelle Lucas‘ win on the platform. The swimmers traveled to Oregon State, suffering a defeat at the hands of the Beavers.

FLAGSTAFF, Ariz. – Janelle Lucas continued her dominance on the platform with a commanding victory Saturday, at the Lumberjack Spring Diving Invitational. Lucas crushed her final dive to finish with a 259.0, the seventh-highest platform score in school history. Lucas – the three-time defending Western Athletic Conference champion in the event – owns the top four scores in Idaho history. She will seek a career sweep at the WAC Championships Feb. 27-March 2, in Houston.

Nikki Imanaka was Idaho’s top performer on the springboards. Imanaka finished second on 3-meter and fifth on 1-meter. In the 3-meter event, she was third after prelims but posted a 306.8 in the finals to finish runner up with a two-round total score of 583.5. Imanaka was the only competitor to top 300 points in either prelims or finals of the 3-meter event. Lucas took fifth on 3-meter and Heather Carbon finished seventh.

The 1-meter event saw Imanaka and Lucas take third and fourth, respectively, in prelims behind scores of 265.8 and 261.35. The Vandal duo went on to take fifth and sixth overall, with Imanaka earning the slight edge. Carbon was 11th on 1-meter, moving up one spot in finals.

Imanaka scored a career-best 201.15 on platform to finish ninth.

CORVALLIS, Ore. – Aimee Iwamoto won the 100-yard breaststroke to lead Idaho’s swimming contingent in a dual meet Saturday, at Oregon State. The Beavers won the meet 159.5-96.5. The Vandals will return home to train and rest for the 2019 Western Athletic Conference Championships Feb. 27-March 2, in Houston.

Iwamoto clocked a 1:06.39 for a wire-to-wire victory in the 100 breaststroke. She also touched the wall first in the 200-yard breaststroke but was later disqualified for an illegal turn. Iwamoto added a runner-up finish in the rarely-competed 100-yard individual medley.

Leah Fisk and Sarah Hall battled in the middle distance races, each earning a second- and third-place showing. Fisk was edged out in the final lap of the 200-yard freestyle, snapping her five-meet win streak in the event. Fisk posted a 1:54.44, less than two-tenths of a second behind OSU’s Kitty Schneider. Fisk also took third in the 100-yard freestyle.

Hall turned in a blistering final leg in the 500-yard freestyle to finish in 5:09.39, but was unable to reel in Lauren Yon of Oregon State who touched first in 5:09.28. Hall and Yon swam stroke for stroke the first half of the race. Yon began to stretch her lead with each lap over the next 200 yards before Hall ramped it up in the final 50 yards. Her 29.34 was the fastest final split in the event by more than two-tenths of a second. Hall also checked in behind Fisk to take third in the 200-yard freestyle at 1:56.83.

Brianna Lucien continued her strong junior campaign. Lucien was second in the 400-yard individual medley at 4:36.53. She also took third in both the 500 freestyle and the 100 individual medley.