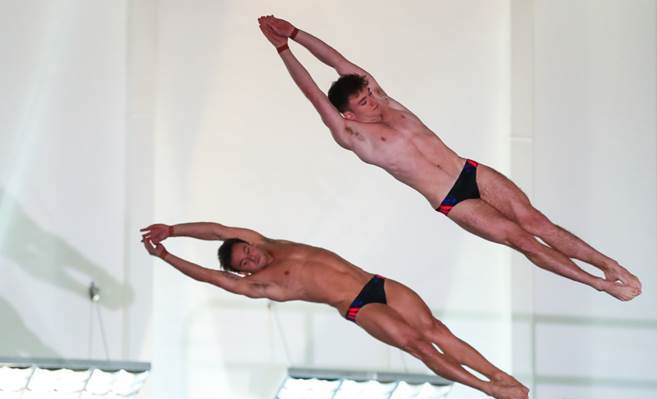 The big names were out in force on day two of the British National Diving Cup, with Tom Daley, Matty Lee, Dan Goodfellow, Grace Reid, Kat Torrance and Gemma McArthur all taking home gold medals after a thrilling day of action. Current photo via British Swimming

The event will host close to 150 of the country’s top divers, with 10 national titles on the line, along with selection for the 2021 FINA World Cup.

The big names were out in force on day two of the British National Diving Cup, with Tom Daley, Matty Lee, Dan Goodfellow, Grace Reid, Kat Torrance and Gemma McArthur all taking home gold medals after a thrilling day of action.

The fact that the final four sessions of the weekend were sold-out before the today’s action even began shows what a great position diving in Britain is in, undoubtedly helped by Tom Daley returning to his home city to compete for the first time since 2017.

Having taken a break from competition last year as he became a father, Daley looked like he’d never been away, as he teamed up with his new partner, Matty Lee, to great effect. Yorkshireman Lee made the move down to London last autumn to work with Daley on a full-time basis, and a hard winter of training bore fruit this weekend.

After nailing their first two dives, with both execution and synchronicity scoring top marks, the duo looked at consummate ease, building throughout the competition to end with a score of 421.41. The highlight came in round five where the pair produced a 79.92 point Back 3 ½ Somersault Pike (207B), which had an associated 3.6 degree of difficulty.

“We’re really happy with that – 421 [points] for our first competition together is pretty solid. Our first two required dives were very good and the kind of scores we need to be challenging the Chinese and the Russians.”

“The National Cup is probably one of the most nerve-wracking comps we do all year, because it’s in Britain, your family are watching, and diving next to Tom is obviously nerve-wracking as he’s a world champion and Olympic bronze medallist. It was really good start and we’ve got a lot to look forward to in the future.”

A young pairing of Ben Cutmore and Luke Thomson got better with each round of the competition to eventually take silver, with Dive London’s Noah Williams and Kyle Kothari relinquishing that position after failing their last dive, but still doing enough for bronze. Both Daley and Lee will be in action again tomorrow in the Men’s 10m, that final taking place at 16.20, with Sunday’s action available across the BBC Sport digital platforms and the British Swimming website.

Whilst the diving world is well aware of his Olympic medal winning ability from the platform, Dan Goodfellow stamped his mark on the springboard events this weekend, adding 3m individual gold to the 3m Synchro title he won yesterday.

After a shaky preliminary round that saw him scrape through thanks to a brace of 80+ scoring dives, Goodfellow was a lot more consistent come the final, which paid off as he took his first British individual title. With his opening 66.30 the lowest score of his six, it was a solid base that saw him wrap up the title, a fifth round Forward 4 ½ Somersaults (109C), good for 85.50 points, the pick of the bunch. In the end a total of 446.10 saw him run out a clear winner.

Of his weekend’s work, the Leeds based diver said:

“I’m really happy. This morning was a bit shaky and I’ve had a bit of inconsistency on my hurdles, but I knew before this weekend that I’d done everything I needed to do so that I was physically and mentally ready, so it was just a few minor things I had to sort out before the final today. I felt really good and probably the strongest I ever have.”

On the depth in the Men’s 3m at the moment, Goodfellow added:

“It wasn’t just two people fighting for that title – there are so many good divers now and we’re all doing the big dives, all the 3 1/2s and the front 4 ½ as well, so you just can’t hold back. We saw some top boys not even make the final, which is brutal and it may not happen in other events.”

The battle for the minor medals was an enthralling one, as Britain’s best chopped and changed throughout proceedings. In the end Youth Olympic silver medalist Anthony Harding came of age, the young Sheffield diver producing a pair of 80+ scores that led to a 433.85 total, whilst Ross Haslam recovered from a slightly sub-par fifth round dive to add bronze to the gold he won in the 1m event yesterday.

Having topped qualifying with a score of 404.70, Jack Laugher couldn’t quite produce the kind of consistency we’re used to seeing, so despite leading after his opening two dives he ended up down in fifth place.

The Women’s 3m Synchro went to script with outstanding favourites Grace Reid and Kat Torrance combining to take gold, backing up their gold and silver medal winning performances in the 1m yesterday. Despite being based in London and Leeds respectively, the pair showed impressive synchronicity throughout, including a pair of 65.70 dives that helped them to an overall total of 285.06.

After wrapping up the National Cup title, Reid said:

“We’re really pleased with that. We were very consistent, but there are obviously little things we want to improve, but considering that’s our first outing of this year we’re really pleased. We seem to have tried every dive list under the sun but I think we’ve found one that we feel really comfortable with and I think that’s starting shine through. I think the more we practice that set of dives the better we’ll get.”

The Women’s 10m will undoubtedly be the closest contest of the weekend and potentially the season, as the top two were separated by just 0.35 points. In the end it was Edinburgh Diving Club’s Gemma McArthur who defended the British National Diving Cup title that she won in this very venue in 2017, just edging out Women’s 10m Synchro winner Lois Toulson. McArthur led from the off, but Toulson assumed pole position after three of five dives and looked like she would take the contest.

It was all change in the very next round though as McArthur regained the lead, which meant Toulson’s fifth and final dive would decide the contest. The dive was good, but not quite good enough, the crowd reaction as the score came up indicating just how close it was as Toulson scored 327.40 to McArthur’s 327.75. The Plymouth crowd had yet more to cheer about as Shanice Lobb took home the bronze.

Full results from all of today’s action can be found here.

To re-watch all of the day’s action in full head to the British Swimming YouTube channel.

Tomorrow’s action kicks off at 10am with the Women’s 3m prelim and once again all of the day’s action will be available on YouTube, with the finals session live on the BBC Sport website and digital platforms.