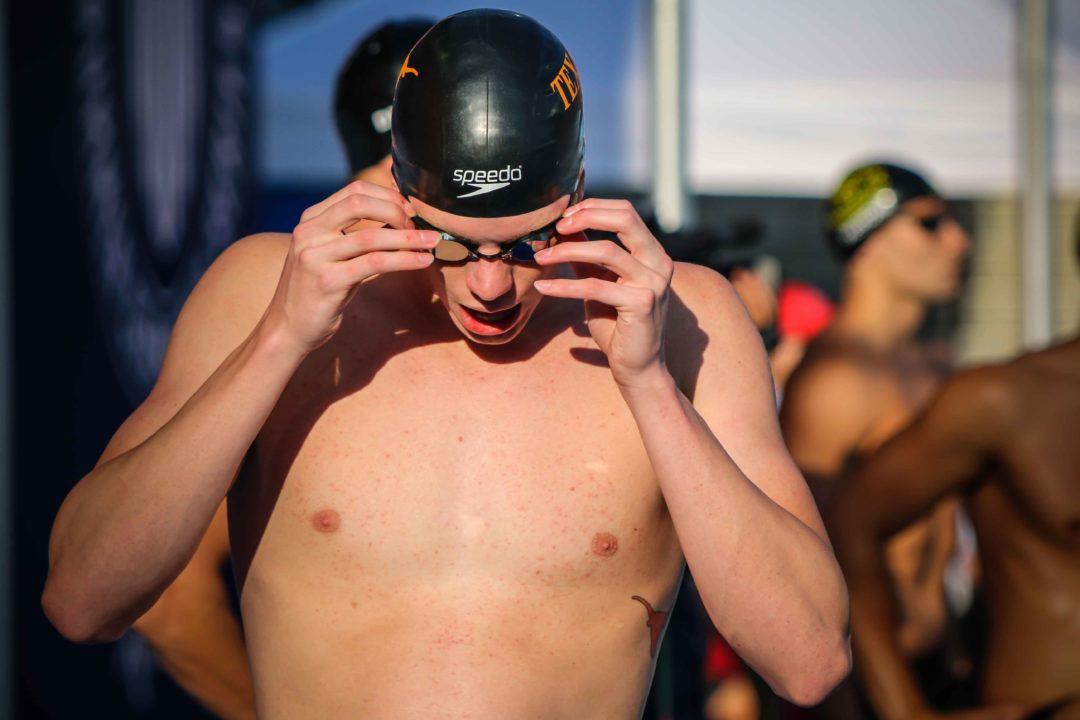 The Salukis added 35 student-athletes from 13 different states and six different countries, of which six are transfers.

While the NC State men dominated the competition Friday, the women’s side of the meet saw a much more balanced team race. In the end, though, the Longhorns were victorious, putting the finishing touches on an undefeated dual meet season.

Just as the men’s side, the medley relay was an exciting affair. Each of the opening three legs for the Wolfpack and Longhorns A relays split within a tenth of a second of their opponent, leaving Texas with a slight lead heading into the anchor leg. But Ky-Lee Perry ripped a 21.65 to Grace Ariola‘s 22.21, giving NC State the win, 1:38.03 to 1:38.50.

The Longhorns picked up another win from Claire Adams, who won the 100 back by over a second, with a 52.77. Sophie Hansson then outdueled Olivia Anderson 1:00.97 to 1:01.11 to put the Wolfpack back in the winners column.

The 200 fly proved to be another tight battle, with Longhorn Lauren Case making up almost a second on NC State’s Kylee Alons over the final 50 to win 1:55.09 to 1:55.16. Alons got a new school record as a consolation prize, taking almost two seconds off her own mark from last weekend.

The NC State Wolfpack won in convincing fashion over the Texas Longhorns and Arizona Wildcats Friday afternoon in Austin.

The meet got underway with a back-and-forth battle in the 200 medley, as Texas trotted out a new lineup. Coleman Stewart led off with a 21.72 for NC State, while Ryan Harty was a half second behind at 22.23. Freshman breakout star Charlie Scheinfeld split 23.98 (on a 0.o6 RT) to Daniel Graber‘s 24.63, putting the Longhorns in the lead. But Nyls Korstanje threw down a 20.62 to the 20.88 Texas got from John Shebat, who had been swimming backstroke on the shorter medley relay most of the season. The Wolfpack had a tenth of a second lead heading into the anchor legs, and Justin Ress held off Tate Jackson, 19.03 to 19.49, to give NC State the victory, 1:26.00 to 1:26.56.

The NC State ‘B’ relay touched in 3rd, with a time of 1:28.98, but was disqualified for “unsportsmanlike conduct,” with no further indication of what exactly that entailed. The Arizona A and Texas D relays were both disqualified for early takeoffs, as well.

NC State almost swept the freestyles, with the biggest wins, unsurprisingly coming in the 50 and 100 free, where Jacob Molacek (19.70) and Justin Ress (43.54) paced the Wolfpack as they swept the top four places in each event. Longhorn Tate Jackson, who busted out times of 18.70 and 41.06 at the Texas Invite a couple months ago, was 8th in the 50 free with a 20.85.

Texas looked a little beat up, as they often do during dual meets, and only got two individual event victories, with Scheinfeld winning the 100 breast in 54.03, and Harty taking the 200 back in 1:44.28.

Krueger led off the 400 free relay in 43.82, which was a faster than any Longhorn swam the individual 100 free.

The Arizona men were going to have their work cut out for them going up against the NC State and Texas juggernauts, and it didn’t help that they were missing their best sprinter, Chatham Dobbs. They did get a victory in the 500 free from Brooks Fail, who had a breakout meet here in Austin at the Texas Invite this season, and who won tonight in 4:22.65.

I want the 25 freestyle race recap

Stay on the lookout 🙂

It was close off the blocks. They were stroke for stroke the entire race. She won it with a great finish….but it was a very close race.

I know the B team got DQ’d but can we acknowledge the NC States men’s depth in the 100 free to go 1,2,4 against Texas and Arizona. I know Texas isn’t known for dual meet times but it’s still impressive.

YES, IT IS IMPRESSIVE.
UT will still win NCAA/D1 this year.

We could also acknowledge that teams try to take down Texas in the dual meet season only to loose to them at NCAAs. They should consider training through this meet and making it a fair contest and then maybe they could give themselves a shot to win NCAAs. NCAAs is the only meet where everything a level playing field because everyone is primed to race. These dual meets are decided based on which team rests more for the meet.

Blame the game, not the players

NC State definitely not rested for this meet – typical Texas comeback. NC State swims fast all year. I am not sure why Texas ever swims dual meets – they put forth no effort and go into the meet with no intention of wining. If you will recall N.C. State and Cal out swam UT last year. Diving won the meet for the horns.

Last couple of Texas/NC State dual meets the teams worked out together. Neither team rested.

Eddie, swimmers, and Texas fans have nothing but respect for NC swimmer. I know I do. Posters here that demean NC state team and swimmers are not longhorn fans. My guess is Eddie used this meet to judge where each swimmer is at preparation and what changes to make. Winning is not that important until March.

With your logic, why do Cal and NC State even go to NCAA’s if they don’t plan on bringing any divers to a Swimming & DIVING Championship Meet?…

NC State does not currently have a facility with platforms for divers; the divers go to Greensboro a few times a week to practice platforms, so that makes it a little tough to recruit those elite divers, but I think the State divers do pretty amazing with the facilities they have to work with. State is currently trying to build a facility that will have those platforms, so that may change in the upcoming years.

NC State has a lot of high quality athletics facilities, most of which have undergone big renovations in the last 10-15 years. Latest swimming upgrades are re-decking, new blocks, new gutter system, new lighting, new scoreboard, etc. which happened fairly recently. That cost $1.5 million and happened in 2010/2011.

I’d say swimming and baseball are probably next in line for ‘brand new facilities,’ but I wouldn’t hold my breath on either unless a big donor comes along. Seems like NC State’s focus at the moment is campus development rather than athletics.

Not sure why Eddie insisted that the Wolfpack come to Austin. NC State hasn’t lost in Austin in years. Braden did not want to travel to Austin knowing ahead of time what the outcome would be- Texas treating this meet like a practice and not putting any effort into the meet. It’s probably good motivation for the horns. If you want to be the best you have to swim against the best.

Any competition against Texas is good and ncaas are in Austin this year so traveling down there and swimming fast is also important for ncaa.

They probably wanted to race in the NCAA pool. Makes sense to me

Where else can you get a free PED dose in the tap water?