Omaha Wins Bid to Host the 2016 US Olympic Swimming Trials 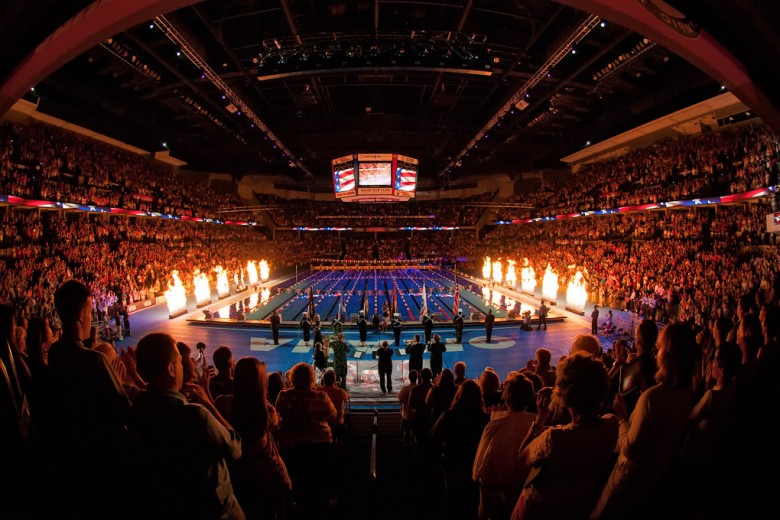 Omaha, Nebraska will welcome the US Olympic Swimming Trials for the 3rd time in 2016. (Photo: Mike Lewis/OlaVistaPhotography.com)

Three for three! In bowling, they call that a turkey. In classic video game jargon, they’re “heeeating up!”. In swimming, we can refer to that as being “Omaha”.

In a live webcast today, USA Swimming announced that Omaha, Nebraska will be the host of the 2016 Olympic Trials, marking the third-straight occassion the midwestern town of just over 400,000 residents (and more than double that in it’s metropolitan area), making it the United States’ 42nd-largest city.

Omaha beat out fellow last-round nominees St. Louis, Missouri, and San Antonio, Texas for the bid. Other announced finalists that were eliminated earlier in the process were Jacksonville, Florida; Indianapolis, Indiana; and Greensboro, North Carolina.

The meet’s host will once again be the CenturyLink Center. Traditionally used for college basketball, minor league hockey, and the annual shareholders meeting of Warren Buffet’s investing megalyth Berkshire-Hathaway. It holds 18,975 spectators in its largest capacity, though for swimming in 2012 they were able to stretch it to just 13,200 (still more than we saw in 2008).

The city is a regional commercial hub of sorts, with five members of the Fortune 500 headquartered there.

Omaha becomes the fifthth site to host this meet three tims or more, joining Long Beach, Indianapolis, the New York City area, and Detroit (though recall that 5 of the first 7 official Trials meets had split sites).

As for concerns over conflict with the College World Series, with an expected later start date for the 2016 Trials (coinciding with a later Olympic date), there should be even less than the small two-day conflict we saw in 2012.

The city may be much smaller than the two it beat out, but they love their sports. Keep in mind that they once packed 17,000 into CenturyLink for a college volleyball match. And it was only a national semi-final, at that.

Fair warning: Farrell’s, the bar that hosted the best party of the week in Omaha, went out of business shortly after the 2012 Trials. I guess we’ll have to find a new locale to shut down in 2016.

is there a firm date for trials yet?

Actual dates are still be negotiated… but look for early July (also standards won’t be published until late 2014).

Seriously. I’m sure it’s a terrific town, and a great site. But opening up the bidding process and having a live announcement to “build suspense” now look like a joke. I wish they’d just say the truth, which is that it will be there as long as Mutual of Omaha is their primary sponsor.

Kind of disappointed. While a great venue, was hoping it would be in at St. Louis or San Antonio. I think it would have been better for the growth of swimming ad a nice change of scenery.