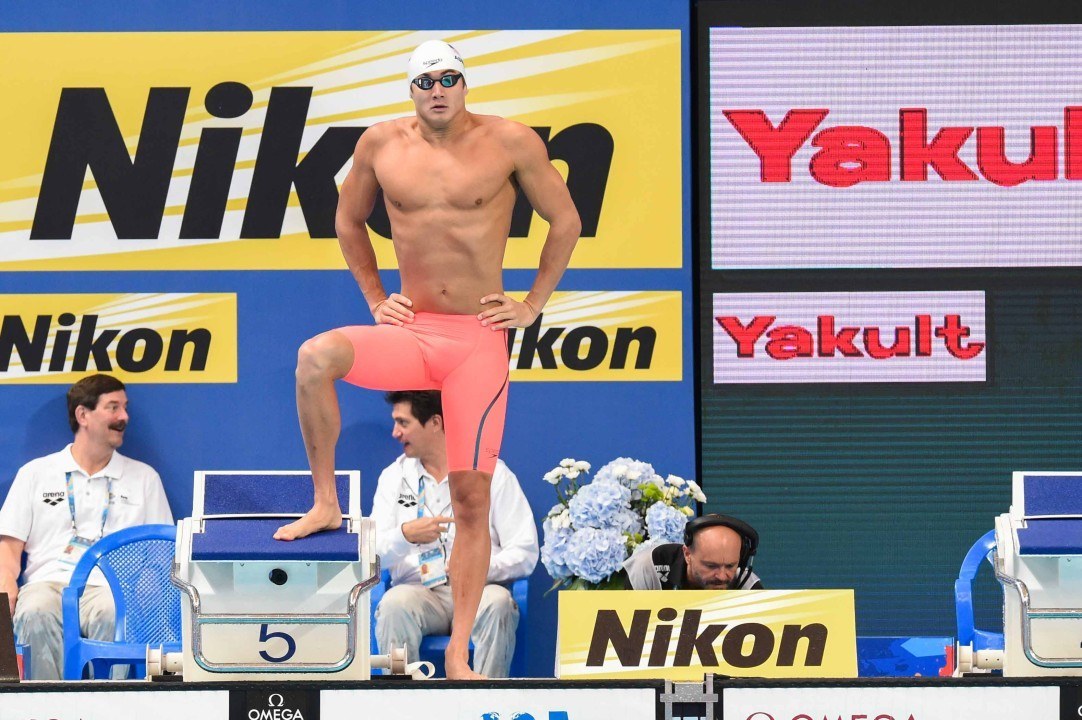 Nathan Adrian will be favored in the loaded men's 50 free at US Olympic Trials. Archive photo via Mike Lewis/Ola Vista Photography 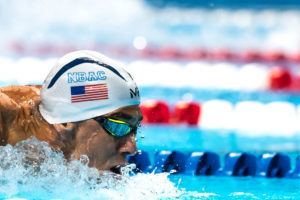 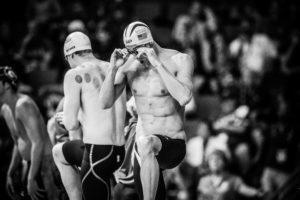 Like several events on the men’s side at U.S. Trials, especially the backstroke and butterfly events, the men’s 50 free has a logjam at the top, meaning multiple very worthy swimmers will miss a spot on the team in this event. Cullen Jones and Anthony Ervin have both been Olympic medalists in this event in the past, and were both finalists in London (Jones won silver), but they are on the outside looking in heading into trials in their best event.

Despite missing the 50 free spot on the Olympic team in 2012 Nathan Adrian has been America’s best in this event for the last seven years. Adrian has been a finalist at four consecutive World Championships, including a silver medal in 2015 and two 4th place finishes the two championships prior. With Adrian’s American record last summer of 21.37, along with how he has been swimming so far this year in-season (lights out), he has to be considered the odds on favorite heading into Omaha in both sprint free events.

The man predicted by many to take the other Olympic spot in this event isn’t Jones or Ervin, but rising star Caeleb Dressel. After winning the NCAA title in his freshman year, Dressel exploded as a sophomore this past season, swimming the six fastest 50 yard frees in history. He shattered Adrian’s American record of 18.66 by nearly half a 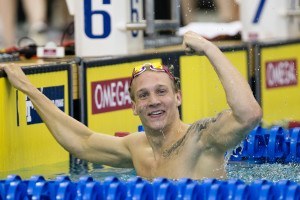 second, with his fastest swim coming in at 18.20 to capture his second straight NCAA title. Success in yards doesn’t always translate well to long course, but Dressel proved himself in the big pool last summer winning the national title in 21.53, a time that would’ve medalled at the World Championships. The sky is the limit for Dressel, and this summer looks like it could be his international breakout.

Cullen Jones has been written off before and proved everyone wrong. After a very disappointing 2011 World Championships, Jones turned up at the 2012 Olympic Trials and showed he was in the best form of his life. He pulled out an individual berth in the 100 free, and followed that up winning the 50 free. He went onto finish 2nd at the Olympics in the 50 free, a long way from 20th at the World Championships just the year prior. Jones has been somewhat off again since 2012, failing to qualify for either the 2013 and 2015 World Championships. However there is little doubt Jones will be fast in Omaha. The 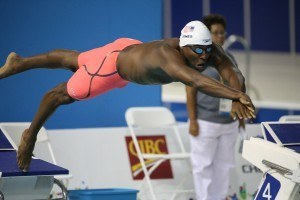 real question is whether or not he can get by the other American stars. The way Adrian and Dressel have been swimming recently, it may take under the American record of 21.37 to even qualify for the team.

Now 35 years old (on May 26), Anthony Ervin will be in tough to qualify in his bid for a third Olympic berth. Ervin, the 2000 Olympic gold medalist in this event, came back to the sport in time for the 2012 Olympics where he finished 5th in the 50. He got extremely hot in 2013, swimming the best times of his career before tailing off in 2015. Ervin missed the final in the 50 free at the World Championships in Kazan and had the slowest split on the shocking US 400 free relay that failed to final. He has moved from Cal to USC to SwimMac over a very short period of time, and will need to find his 2013 magic if he’s to have a chance of rivaling the likes of Adrian and Dressel here.

One man overlooked by many in the loaded 50 free field at Olympic Trials is Josh Schneider, mainly because he has never represented the US at a major international meet. Schneider has experienced a series of near misses in his attempts to qualify for major competitions, including 4th place at the 2012 Olympic Trials. His best time stills sits at 21.78 from the those 2012 Trials, so he’ll need a big improvement to challenge for a position. His work is cut out for him with Adrian (21.3), Jones and Ervin (21.4), and 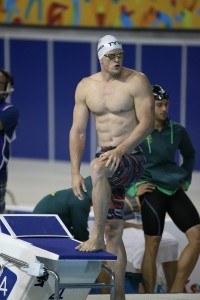 Coming into Omaha as somewhat of a wildcard is Jimmy Feigen, who has followed up a breakout 2013 with a few subpar years. Feigen qualified for his first Olympic team in 2012 on the 400 free relay, and followed up with an individual silver medal in the 100 free at the 2013 World Championships behind Australia’s James Magnussen. In 2015 Feigen led off the disappointing 400 free relay and failed to make it out of the prelims in the 100 free. However, Feigen swam his fastest 50 free in three years in early 2016, a positive sign for the future. His best time stands at a quick 21.77 from 2009.

The other two men to look for in the final in a absolutely loaded event are Michael Chadwick and William Copeland. Chadwick, just 21, is knocking on the door but unlikely to be let in with the likes of Adrian, Dressel, Jones and co. at the helm. A swimmer for Mizzou in the NCAA, Chadwick had a breakout summer in 2015 including a sub-49 second 100 freestyle and a 22.03 50 free. The 50 time ranked him 6th in the U.S. for the 2015 season, putting him in prime position to final. He’ll have a real shot at Rio in the 100 free, where he is capable of a relay birth.

Copeland is up there with Michael Phelps and Ryan Lochte at age 30, but has been doing some of his fastest swimming ever lately. Copeland swam his first best time in four years last summer at US Nationals in San Antonio, finishing 5th in the final. He has been putting up some consistent in-season times in 2016, including competing in Australia for a few meets. If Copeland can equal or better his San Antonio performance he’ll have a very good shot at making the final.

Dark Horse: One man who could surprise in this event is Paul Powers, who cracked the 19-second barrier for the first time this year on his way to the B1G title swimming for the University of Michigan. Powers owns a personal best of 22.18 from the World University Games last summer where he won a bronze medal.

It’s interesting looking at the 50 and thinking it’s one of the events where there are 2 clear favorites, which feels odd considering it’s the shortest event.

The last trials we went through, Adrian’s semi-taper resulted in him not having quite enough speed for the 50 because he was more working on saving it to be at his best for the 100 at the Olympics. I’ll be curious to see if he’s ironed that process out in the ensuing time so he has enough speed but also isn’t fully rested and has more in the tank for the big meet.

The new conventional wisdom seems to be that you can’t swim a great 50 and a great 100 in the same season (or same meet, at least). I don’t think the sport is quite at that level of specialization (the talent pool not as deep as Track) but I guess it will be put to the test, here. 21.20 seems like a stretch for Adrian, at least at trials. Dressel has more upside here, but we’ll see what happens. Wasn’t Ervin’s swim in Mesa an in-season career best? IMO this is probably 3 guys for 2 spots, a yard ahead of the field. I do think Feigen will surprise some people in the 100. Amazing anyone could write that sentence.

I’m not sure that’s a 2-men battle. Ervin will defend his chances very well. The experience is on his side. Right now I pick Dressel and Adrian but I wouldn’t be shocked at all if Ervin qualified. I think the 2 most prepared guys for these trials will qualify. There’s still a question about Adrian. Does he focus more on the 100 free like 4 years ago? He was not fully tapered and swam only 48.00 in 2012 to qualify easily because he knew he had no competition. Result: it probably costed him a spot in the 50 free but it probably gave him the 100 free gold in London. He peaked when it was the most important. Same scenario… Read more »

Au contraire, if they swim 21.20 and 21.28, both Adrian and Dressel could only be faster in Rio and I hope they will finish with the same time a la Earvin/Hall Jr in Sydney and will be kind enough to leave bronze to Manaudou.

Dressel smashed the American record in SCY at SEC champs, then went faster (4 times) at NCAAs a few weeks later… this isn’t the mile.

Ervin and Jones are too far past their prime. Stick a fork in them they are done.

I’m not sure that Adrian was not fully tapered for trials in Omaha. Sure, he went quicker in London. But perhaps he just swam better? Better execution? Deeper pool? Ledecky and a couple others may elect not to go into Omaha on full rest that doesn’t mean the vast majority of the swimmers that qualify for the team, who will be fully rested, can’t improve their times in Rio.
They have five weeks between trials and Rio (and no jet lag this time). There’s no reason they cannot swim at peak form in both meets.

Manaudou less dominant? Come on- He has no individual 100 free to worry about in the program,will most likely give the world record a scare in the semi and will do enough in the final to win gold. Adrian will win trials, i hope his focus is on the 100- i picked him 2012 but McEnvoy will get my vote this time. USA need Adrian in full lezak mode for the relays heats and finals- I give him a greater chance at having the fastest relay split over individual gold(def a contender within 0.15). Shifting full focus to the 50 would be silly surely?

Jones over Schneider any day of the week!