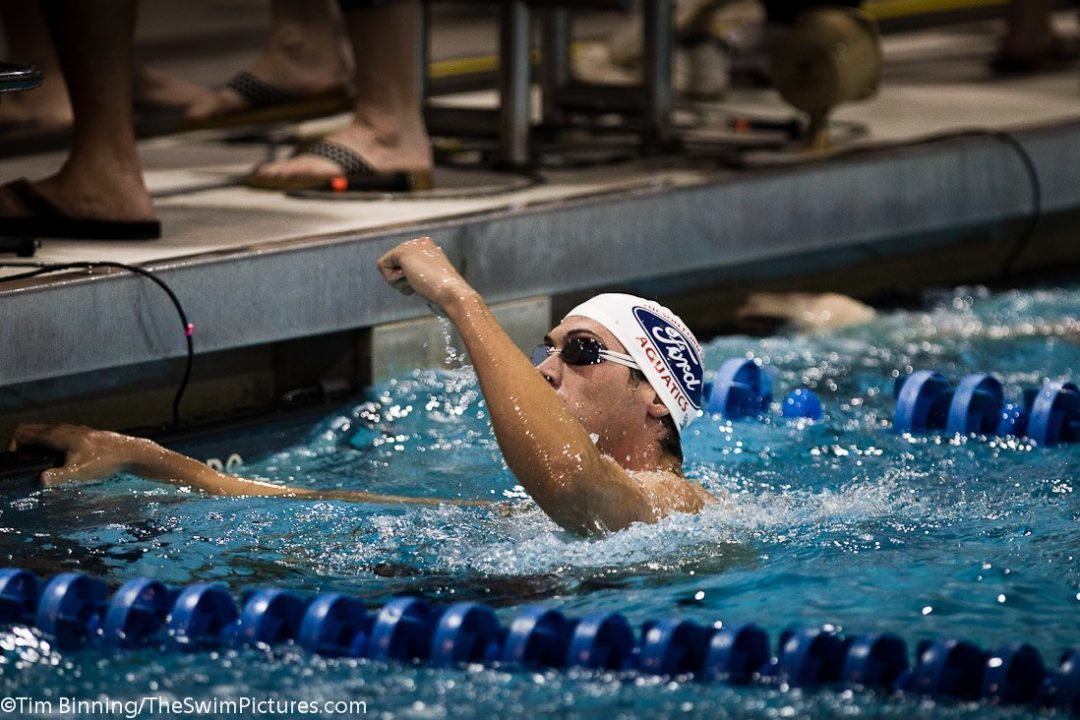 "His NCAA and international experience will help our talented swimmers reach their potential," said Head Coach Richardson. "A number of our athletes are striving to make their respective international and Olympic teams and Simon is the perfect fit." Current photo via Tim Binning/TheSwimPictures.com

The University of the Pacific men’s and women’s swim teams are excited to announce the hiring of Simon Burnett to the coaching staff as an assistant coach.

The swimming community around the world certainly knows about the three-time British Olympian and NCAA record holder who will now bring his international experience and knowledge to Pacific.

The Head Swim Coach Peter Richardson raves about what Coach Burnett will bring to the team.

“His NCAA and international experience will help our talented swimmers reach their potential,” said Richardson. “A number of our athletes are striving to make their respective international and Olympic teams and Simon is the perfect fit.”

Coach Burnett swam for the University of Arizona from 2003-2006 where he won three individual titles as well as three relay championships. The former Wildcat team captain also set the NCAA and US Open record in the 200 freestyle (1:31.20), which he still holds today. Burnett represented Great Britain in the 2004, 2008 and 2012 Olympic Games where he was a four-time Olympic finalist. In addition to his Olympic success, Burnett was a six-time World Championship Finalist.

“To have the world’s fastest 200 yard freestyler on your staff, is not an every day occurrence. Our team will surely benefit from his experiences as a swimmer. However, as good of a swimmer as Simon was, his ability to coach and communicate can surpass his athletic accomplishments,” said Richardson.

Coach Burnett will be working with all aspects of the Pacific swimming program but will put an emphasis on recruiting, coaching the freestylers, and video analysis.

College Swimming New is courtesy of the University of the Pacific.

My sympathies on having to live in Stockton…

Would have been nice if he told his high school kids goodbye in person instead
of the the Mom in charge of the team sending an email out with his news. Sad!

I will miss Simon a lot in the master’s swim practice. It was a great pleasure to have swam with him. Good luck

His next step should be head coach in the PAC 12.

Simon Burnett is simply one of the toughest and talented swimmers I have ever seen.
Burnet > 200 Free.

Be sure and watch the looks on the Arizona coaching staff at the end of this swim. Jaw dropping swim!

That technique tho…This is damn near perfection. All up top with no extended underwaters. No turbulence out front. I’ll watch this again a couple times at lunch.

The fact he swam that race after a 20 hour flight from Australia makes it all the more impressive. What a tough athlete.

Absolutely ridiculous 200 free
10+ years later and absolutely nobody has been faster. Phelps, Lochte, Berens, Quintero… nobody.

I always thought if Phelps jumped in to swim a 200 yard freestyle instead of the 200 he swam at Bejing, it would have been a 1:29.