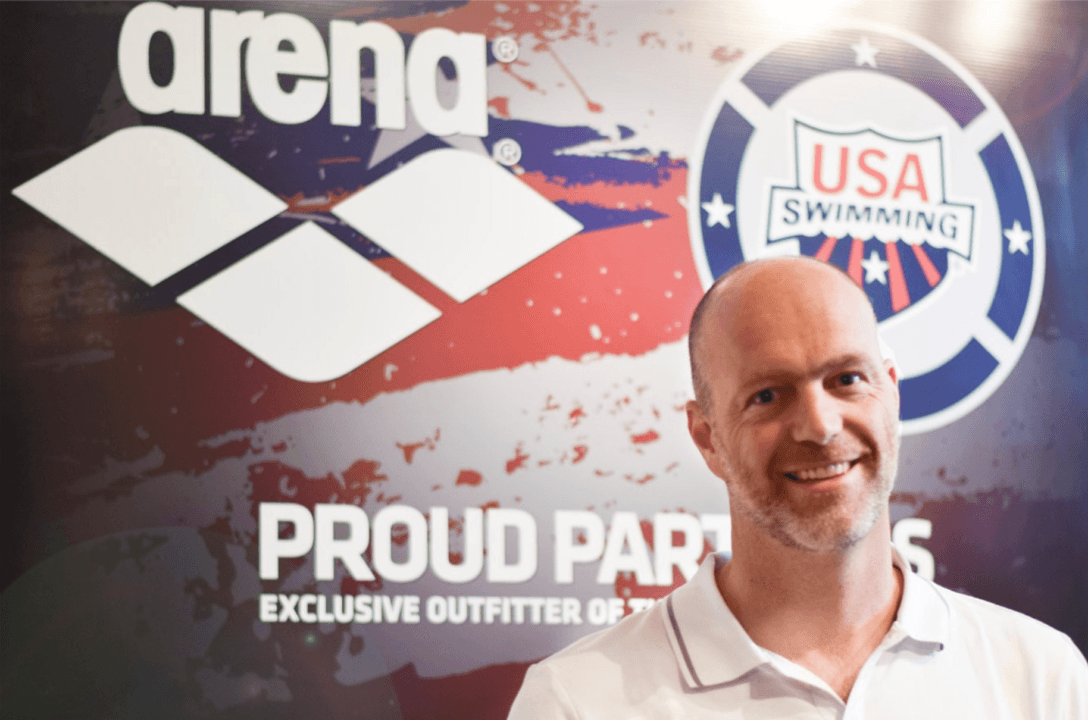 Pinger represented his country winning bronze medals in the 4x100 freestyle relay at both the 1992 and 1996 Olympic Games in Barcelona and Atlanta. He was also named German swimmer of the year in 1992. Current photo via arena

Global water instinct brand arena has announced the appointment of Mark Pinger as General Manager of its North American subsidiary as of 2 May 2016. Mr. Pinger brings extensive experience in the global sporting goods industry to arena, and his selection follows an intensive scouting and interview process.

Born in southern Germany near the French border, the 45-year-old Mr. Pinger represented his country as a swimmer in the 1990s, and won bronze medals in the 4×100 freestyle relay at both the 1992 and 1996 Olympic Games in Barcelona and Atlanta. He was also named German swimmer of the year in 1992.

Mr. Pinger entered the business world in 1999 as a business analyst at McKinsey and Company, and in 2003 left to join Nike, where he started out at Global Headquarters in Beaverton, Oregon. In 2007 he moved on to assignments in Hong Kong as Chief Operating Director  of Asia Pacific Apparel, in China as Vice President of Merchandising, in Germany as General Manager  of Germany, Austria and Switzerland, and at the European Headquarters in Hilversum, the Netherlands, as General Manager of Nike Basketball, Jordan, Athletic Training and Tennis.

In 2013 he returned to Global Headquarters in Beaverton as General Manager of Nike Pro.

“I am very excited about this opportunity,” said Mr. Pinger. “I grew up with arena in Germany at a time it was the leading swimwear brand; my club was outfitted by arena, and I won an Olympic bronze medal in 1992 wearing an arena suit. In my business career, I have been connected to sports for over 12years.  Swimming is still close to my heart – I swim regularly in a masters program, both of my daughters are competitive swimmers, and my wife, who I met at a training camp, is a swim coach. So working at arena feels like coming home. I am looking forward to combining my knowledge from the sporting goods industry with my passion for swimming to grow the arena brand in the US.”

Mr. Pinger’s mandate as the leader of arena’s North American operations will be to fuel the growth of the business and the organization by winning the hearts and minds of athletes in the pool.   Working in close cooperation with the company’s Global Teams, he will report directly to arena CEO Cristiano Portas at global headquarters in Tolentino, Italy.

Since 1973, arena has created and marketed waterwear products for competitive swimmers and swimming fans worldwide, and is universally recognised as one of the premium brands of high quality swimwear and equipment. Over the last 40 years, arena has developed strong expertise in creating best in class products with particular focus on the pool segment, while also expanding into leisure and beach wear.

Today the arena brand has a presence in 116 countries around the globe. With direct representation through wholly-owned subsidiaries in Italy, France, Germany/Austria and the USA, the group also employs a network of 33 qualified business partners in 100 countries, while the Japan-based Descente Group owns and manages the brand in 11 countries of the Far East.

Very proud of Mark – he will do an awesome job for Arena. I will never forget the great swims he turned in as a ‘Cane and especially that historic 400 free relay anchor to clinch the Big East Title up in Trees Pool!

Yes, very happy for Mark — and that was one of the most exciting relays I’ve seen!