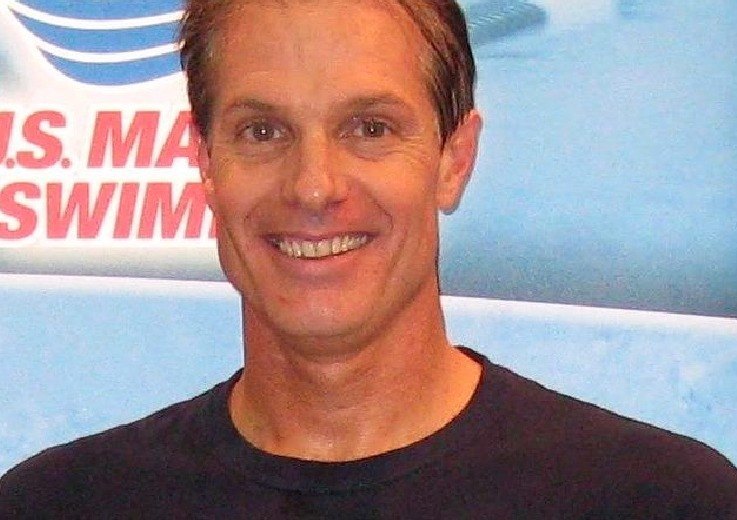 David Sims is supposed to be a miler. That’s the event in which he made the 1980 Olympic Swimming Team,...

David Sims is supposed to be a miler. That’s the event in which he made the 1980 Olympic Swimming Team, clocking a 15:19 when he was only 17 years old. 33 years later, David’s swimming everything, sprints included, and in spectacular fashion. In many ways, he is United States Masters Swimming’s  answer to Michael Phelps.

Burke and David Sims at the 2009 Stanford Alumni Meet

David recently started resting for the 2013 US Masters Swimming Spring Nationals, May 9-12, in Indy.  He felt solid early in his taper and decided to go ahead and shave for Illinois Masters Championships. David ripped a 2:00.5 in the 200 IM, a 4:21.9 in the 400 IM, and he dipped under the two-minute barrier, a first for a man 50+, going 1:59.2. All races were Masters National Records!

I’ve followed David’s progress since he jumped back into competition four years ago. It started when I ribbed him about looking like a tubby seal in a photo of  him wearing a dark tech suit (photo on the right). David’s belly wasn’t too round, but he was standing next to his very trim son, Burke, a freshman at the time, at the “sacred” Stanford Alumni Meet.

David was only a few months into training when he attended the 2009 Stanford Alumni Meet. Five months later I saw him at an event, and he was not tubby at all. He had the body of a college swimmer. The abs were there with the broad, defined back of a man who had logged some serious workouts. David was 46 years old. One month later, he put down a 46 100 yard free and a 50 point 100 yard butterfly. Whoa! Respect!  That’s all I could think.

The above is a familiar story for many masters swimmers (though everyone doesn’t down masters records like Sims).  One of the many attractions of masters swimming is that it is the only true Fountain of Youth that we know of.  For David, it has added passion and structure to his life, something he shares with his children. Moreover, he has become a true student of the sport, which is I why I wanted to catch up with him.

DAVID: You seemed intrigued by my newfound repertoire of events.

MEL: …your growing repertoire. I am! Give me a little more background  and color on that….

DAVID: I learned to swim breaststroke in the last 2 years when I finally realized that you need a good breast leg if you want to be a great IMer. I never swam it as a kid because I was labeled as not a breaststroker, but as an adult I said BS, I have 2 arms and 2 legs and I should be able to learn this.  So I set out to de-mystify the breaststroke and teach it to myself.

MEL: A lot of swimmers have attempted that, and a lot have failed. What was your result?

DAVID: Last year I entered the 100 breast at Nationals and took 2nd with a 1:00.5 and managed to have the fastest breaststroke split of anyone (aged 45-49) in the 200 IM. So, I feel like that hypothesis has been proven out.  One of the most beautiful things about masters swimming is that you can re-invent yourself and do it within the sport you love.

MEL: When we spoke four years ago, I got the impression you were only going to hit it hard for a year or two. That’s it, but you’re still at it.

DAVID: It took a long time to get in shape. Once I did, maintaining it was more manageable, and…I didn’t want to lose it.

MEL: What does your week look like in the water? Break it down…

MEL: That’s very solid work, but I thought you might be swimming more.

DAVID:  I also do 2-3 days per week dryland. It’s not in a weight-room. I like circuit training, a mix of cardio and strength.

MEL: A lot of elites, the post-grads, are doing much shorter workouts, high intensity, lots of speed. Are you mirroring their workouts?

DAVID: I follow what they do… I do some pilates. That’s a part of my training. My wife, Janice, read that Missy Franklin does it, and I know Natalie Coughlin does it.

MEL: Now that you’ve got 4 years in masters under your belt, how are you keeping if fresh as you get older?

DAVID: I had an epiphany two years ago about competing in the older age groups which has led to a 5-year plan. The thesis is that you are strongest when your youngest and should therefore train for the sprint events in your first year or two, distance events in the last year or two and middle distance races in the middle years.  I also think there is some benefit to focusing on long axis strokes in the same year and the short axis strokes in other years.  By rotating through the events this way, a masters swimmer can gradually evolve and stay fresh by not focusing on the same events every year. It also keeps you from spreading yourself too thin in any given year. This year I am a short axis sprinter.

DAVID: I entered my first masters nationals in 2010 thinking that I was still a miler but wanting to test out the shorter events too.  Turned out that my worst finish was the mile and I did best in the 100 free and fly and 200 free. That confirmed another truth, if you want to be great in the mile you have to train for it.  Most masters programs do not do the type of aerobic training necessary to reach your potential in the mile. Mostly because nobody wants to train that way. I really wouldn’t have to spend any more time in the water but the workouts would have to be materially different – a lot more swimming and a lot less talking.

DAVID (laughs): I’m still trying to figure out tapering. Its a very peculiar thing and I’m not sure that I’m  doing it right.  Still struggling with how much 50-year old males can rest before detraining occurs. Its a tricky situation and you never want to err on the side of resting too much.  I keep meticulous notes and try to build on my own experiences. I keep way better log books now than when I was a youth.  I suppose its a byproduct of self-coaching.

MEL: I noticed you’re all yards and short course meters. You don’t have a presence in long course. Why?

DAVID:  My kids come first, which is why I only started 4 years ago. Even now, I have yet to swim in a LCM meet because the kids swim schedules take priority.  Im happy with that because I know that they don’t have many years left and I truly enjoy watching them swim.

(NOTE: David’s son Burke is graduating from Stanford, daughter Haley is a sophomore at Stanford, and his twin daughters, Maddy and Gabby, will be seniors in high school this fall. All are exceptional swimmers, elites.)

MEL: Diet? You mentioned that that’s an area of your life that took a radical change when you started competing again. I don’t want to end this conversation without covering it….

DAVID: Yes…I changed my body composition by changing my diet.  Back in 2009-2010 I converted to a mostly-raw-whole-foods diet.  I did a little research and realized that my “reasonably healthy diet” was full of poisons and resulted in me gaining 20+ lbs over 20 years and prone to creeping illness.  Now its easiest to say that my diet is “mostly vegan” and I feel pretty darn healthy for a 50-yr old.

MEL: Where did you learn this? You know, Stanford Swimming Alum, Richard Roll, became a vegan at 40, and now competes in world-class super endurance competitions.

DAVID: For me, the insight was local. A couple opened a raw food restaurant here in my town. I went in out of curiousity.

MEL: We’ll end it there… Thanks, David, for catching up. I really appreciate it. Unitl next time, good luck at Spring Nats!

Information on the 2013 US Masters Swimming Spring Nationals can be found here.

David Sims, back in the day:

“… a lot more swimming and a lot less talking.”

Yeahhhhhh, that’s definitely something I need to work on myself.