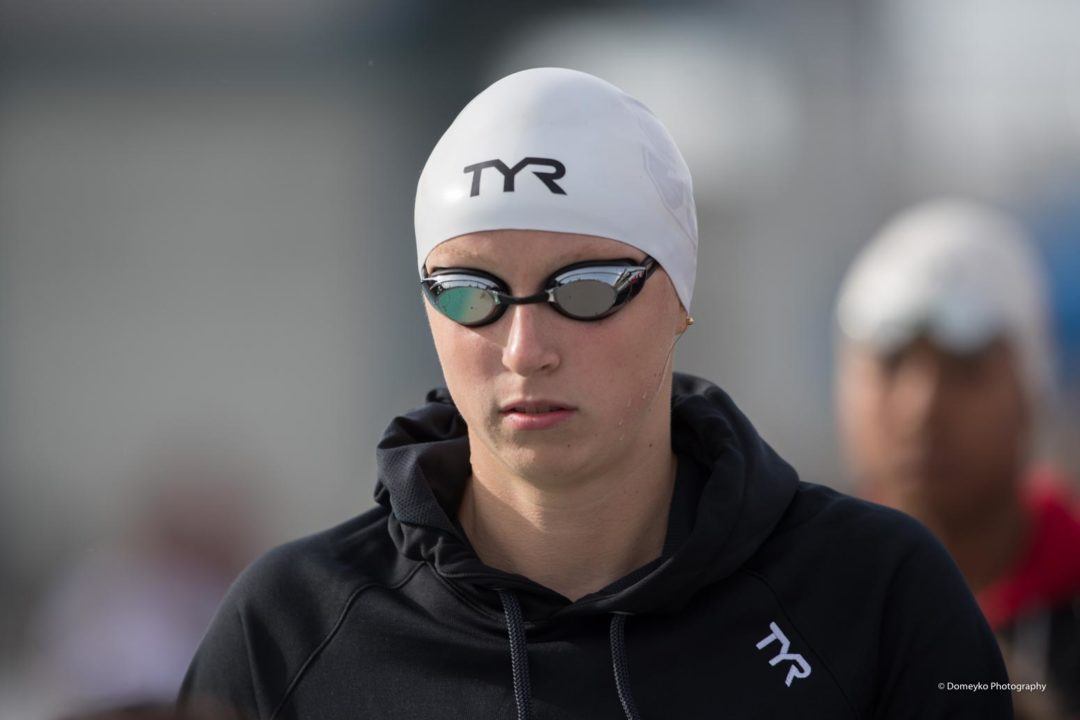 American swimmer Katie Ledecky missed out on winning an ESPY Award on Wednesday evening at the 2018 ESPN-produced awards show for athletes. She was nominated for Best College Athlete, which in 2018 was a combined-gender award after honoring separate male and female College Athletes of the Year in prior editions.

The ESPY Awards, which stand for Excellence in Sports Yearly, is ESPN‘s annual awards program. The majority of the awards, including the one that Ledecky was nominated for, are decided in part by an online fan vote.

The 2018 College Athlete of the Year honor went to former University of Oklahoma quarterback Baker Mayfield.

The 2017 Heisman Award winner as the country’s best college football player, Mayfield won the award with 3rd-highest percentage of votes in the award’s history history. He led Oklahoma to its third-straight Big 12 Championship, ranked 2nd in the NCAA FBS with 4,627 passing yards in 2017, and led NCAA FBS with a 198.9 passer rating. Oklahoma finished the season with a 12-2 record, losing to Georgia 54-48 in the semi-finals off the College Football Playoff.

Ledecky, who turned pro after her redshirt sophomore season, is already one of the most-decorated female swimmers in history at just 21-years old. She owns 5 Olympic gold medals and one bronze, plus 14 World Championships across 3 editions. Her 14 total individual titles at the Olympics and long course World Championships are the most by any female swimmer in history.

She was not-unblemished at her 2018 college championship, however. While she won the 500 and 1650 frees, her best events among those on the NCAA D1 schedule, she took on the 400 IM (a race she hasn’t yet tried internationally) instead of the 200 free. While she broke the American Record in the event at Pac-12s, her teammate Ella Eastin won the race at NCAAs in 3:54.60 – three-and-a-half seconds faster than Ledecky, and the fastest time in history. Eastin won all 3 of her individual events at NCAAs and swam the fastest-ever time in each at some point in the season, and also added two winning relays.

Ledecky added a relay title in the 800 free relay, but only swam one relay at NCAAs: as compared to the two she swam as a freshman.

In her first race as a pro, at the Pro Swim Series stop in Indianapolis, Ledecky broke the World Record in the 1500 free.

Nathan Adrian won 2 individuals, 4 relays, and a team NCAA title in 2011. That same year, Jimmer Fredette won this same ESPY. His team lost in the Sweet 16.

We all know how their pro-careers turned out….

I wonder how dominant Mayfield would have to be to actually be comparable to Ledecky.

Let’s give it a shot shall we.

He not only would have to have 4 Heisman trophies he would need at least a Super Bowl win and an MVP.

Then he would need to be able the throw 2 or 3 80-90 yard touchdowns in every game he played in.

On top of that he would also need to play special teams and go out and cause two unintentional concussions against the opposing return team. In every game.

There would need to be a minimum of 1000 references in articles to him being the best football player of all time.… Read more »

But again, it sort of highlights not that ESPN was wrong, just that comparing ‘best’ across sports is a fool’s errand. Sports just aren’t the same. The tools and event formatting available for college football players means that they’ll never have the same ‘headline credentials’ as college swimmers. And all ‘rah rah’ swimming aside, declaring a swimmer as College Athlete of the Year every year is… Read more »

It is absurd that Dressel was not nominated for this award. Ledecky was nominated because of her prior success, not her 2018 NCAA performances. Dressel had a better 2018 NCAA Championships than Ledecky. Dressel should have been nominated.

It’s a fundamental flaw of the award now that they’ve combined genders. Male football and male basketball will almost always be nominate, leaving not enough room for both gender equity and a male swimmer.

(Of course, no male swimmer was ever nominated before either).

Dressel not being even nominated is the real travesty that people should be upset about here, IMHO.

Mayfield’s season was great. But it cannot be proven as the best performances ever. Such is the way in team sports. Dressel’s can be proven as the best. He set records in 3 individual events at NCAAs and then add in the 100 Breast record he swam at SEC Champs. It deserves recognition as at least a nominee for the Best College Athlete. In fact his past season deserves a nomination for Best Male Athlete. He could have been nominated for Best Record Breaking Performance or Best Chamionship Performance.

Bottom line? Football is much more popular than swimming

After watching the documentary, I voted for Rowdy.

Sadly, that vote was missed during the counting process as the counter was breathing to his left at the time.

Y’all, let’s not act like we are all surprised here! Swimming will NEVER get the recognition it deserves. I once had to swim outside while it was raining. Do you know how hard that was!? I got wet!

remember that time when mayfield got in trouble for being unsportsmanlike, oh wait that was every week

I mean to be fair, this was the award for best *college* athlete, and Ledecky wasn’t even the best *college* swimmer last year. Eastin and Dressel spring to mind.

Also, these awards are so infinitely debatable as to make them really not that meaningful. For instance, the Astros won “team of the year.” Of course they were really great all year and finished it off with the Championship, but were they really better than the Golden State Warriors or the Philadelphia Eagles? Like objectively better than a team that claimed its 3rd title in 4 years, or a team that claimed the best record in the NFL and delivered a historic franchise its first Super Bowl? In the end,… Read more »

I’m not really sure why all the downvotes. There are legitimate arguments that Dressel was just as good as Ledecky in the past 12 months. Eastin was fantastic at NCAA’s as well.

As for the Astros, they were a very talented team and dominated all year. But there were several deserving teams, and I think part of the reason they won is that they were inspirational. In the face of tremendous tragedy, they were seen as a beacon of hope for a city that went through a terrible disaster, and they also contributed immensely to the hurricane relief in terms of time and money.

Nowadays there are a lot of people who do not rationally consider arguments, but just love to put down anyone who argues against their gut feeling (liberal, conservative, feminist etc.) towards a topic, so a couple of them used downvotes to take it out on you, maybe someone like that will feel strongly enough about this topic, and respond to your comment with something compelling like “Delete your account” 🙂