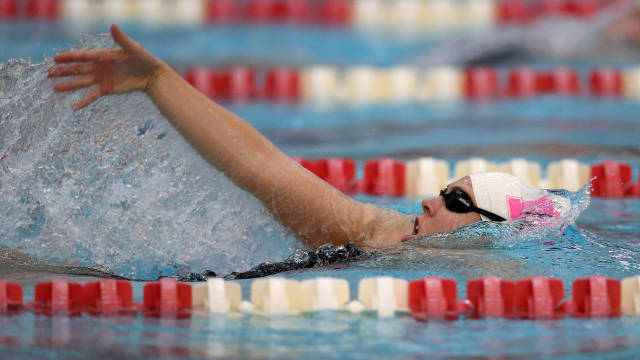 The Huskers also won both relays. In the 200 medley, freshman Carla Gonzalez, Ehly, Oeltjen, and freshman Allie Worrall teamed up for 1:45.74, while sophomore Lindsay Helferich, Worrall, Gonzalez, and Oeltjen came together for 3:31.81 in the 400 free relay.

The Iowa State Cyclones’ sole victory came in the 50 free, where junior Laura Miksh and her senior teammate Maddie Rastall took the top two spots with 24.11 and 24.33, respectively.

Ames, Iowa- Senior Erin Oeltjen had a hand in four event wins and was one of five Huskers to capture two individual titles as the Nebraska swimming and diving team dominated Iowa State, 195.5-101.5, to win its season-opening dual at Beyer Hall Pool on Saturday.

Oeltjen was joined by a fellow senior from Omaha Anna Filipcic, along with junior Jordan Ehly and sophomores Dana Posthuma and Kaylyn Flatt in notching a pair of individual event wins against the Cyclones.

Oeltjen, a senior captain for the Huskers from Omaha, swept the top spots in the backstroke events, including a winning time of 56.64 in the 100-yard back, before adding a time of 2:02.01 in the 200 back. With Oeltjen leading the way, the Huskers swept the top three positions in both events, accounting for 32 of Nebraska’s team points in the dual.

Before sweeping her two individual events, Oeltjen helped get the Huskers off to a strong start with a win in the 200-yard medley relay. Oeltjen joined Ehly, Gonzales and freshman Allie Worrall with a winning time of 1:45.74.

Oeltjen then helped the Huskers put an exclamation point on the team dual victory with a win in the 400-yard freestyle relay. She joined freshmen Gonzales and Worrall and sophomore Lindsay Helferich in a winning time of 3:31.81 to close the meet.

Oeltjen was far from the only Husker to produce a big opening meet. Ehly, a junior from Albuquerque, N.M., swept the top two spots in the breaststroke events while joining Oeltjen for another victory in the 200 medley relay.

Helferich, Worrall and senior Julia Roller helped extend their dominance in the freestyle events by owning the top three positions in the 100-yard free. Helferich notched a winning time of 52.92, while Worrall (53.28) and Roller (53.62) gave the Huskers 16 big points in team scoring.

Beeler, a freshman from Parkville, Mo., provided Nebraska with its final individual swimming victory of the day by taking first in the 200-yard individual medley with a time of 2:05.51.

While the Huskers were dominating in the pool, they also owned the diving well behind strong opening performances from All-American Anna Filipcic. The senior from Omaha, Neb., won the one-meter dive with a score of 315.08. She completed her day with a winning score of 328.88 in the three-meter dive. Husker freshman Abi Knapton from Omaha added a solid runner-up finish with a total of 315.82 in the three-meter event.

Filipcic and Knapton met the NCAA qualifying standards in both the one- and three-meter events to earn spots at the NCAA Zone Diving meet later this season.

The Huskers will face South Dakota State in Brookings on Oct. 14, before Nebraska opens its home schedule at the Devaney Natatorium against Northern Iowa on Friday, Oct. 28 at 5 p.m.