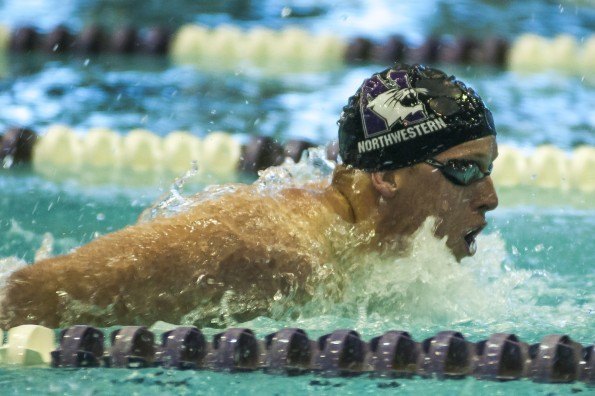 Northwestern and Western Kentucky battled it out in a tight meet that went back and forth for men and women with the Wildcats taking it all in the end. Current photo via www.dailynorthwestern.com

Western Kentucky men and women fell just short to the Northwestern Wildcats this Friday with final scores of 151-145 for the women and 161-139 men. Full results to the meet can be found here.

WKU freshman diver Amy Crayne qualified for NCAA zones with a score of 282.15 on three meter and 257.65 on one meter. She took first on both boards and was followed up by her teammate Madison Rylee, while Giorgi Meyer took second for the WKU men on one meter and three meter.

The meet started hot with the 400 Medley Relay on the Hilltoppers’ side. Northwestern women did not participate in this event, but the WKU relay of Allie Duff, Clair Conlon, Maggie Patterson and Michelle Craddock took first with a 3:45.81.

The WKU men’s relay of Seth Musser, TJ Bland, Heitor Rodrigues and Americ Le Corno went 3:17.93 which set the Bill Powell Natatorium Record which was previously 3:20.48. In second place, Northwestern’s relay of Dominik Cubelic, Uula Auren, Mark Ferguson and Chase Stephens cruised in also under the natatorium record with a 3:18.66.

The 1000 freestyle went to Lauren Abruzzo of Northwestern with a studdly back half performance and touching just over the 10 minute mark with a 10:00.04. Her last two 50’s negative split her whole race as she crushed the competition. Ashley Forsyth of WKU took second with a 10:18.30.

Northwestern’s Jordan Wilimovsky took first in the men’s 1000 freestyle with a 9:18.09 with splits that straddled the 27 and 28 second line consistently throughout his race. Loui Little of WKU took second with a 9:27.19.  Charlie Cole of Northwestern takes third just behind Little in a time of 9:29.34.

Lacey Locke, Northwestern freshman, came in blazing hot to steal first for the 100 backstroke in a 55.39 which broke the Powell Natatorium record. Allie Duff and Natalie Lenderman of WKU took second and third with times of 59.33 and 58.27 respectively. Locke also took the 200 backstroke by over two seconds with a time of 2:01.01 while Duff took second in the 200 back with a 2:03.41.

The 100 back battle for the men was extremely tight as Mark Ferguson of Northwestern took first with a 49.61 and just edged out Seth Musser of Western Kentucky who took second with a time of 49.64. Seth Musser throws down in the 200 backstroke while in his comfort zone and shows us a 1:50.13.

Claire Conlon gave WKU the edge up on the 100 breaststroke by breaking out a stellar in season time of 1:03.53 while Julianne Kurke for Northwestern took second with a time of 1:04.53. Third and fourth belonged also to WKU by Whitney Spain and Amy Halligan with respective times of 1:05.18 and 1:05.69.

The 200 fly went to Ellen Stello of Northwestern with a time of 2:05.33 on the women’s side while on the men’s side the win went to Heitor Rodrigues with a time of 1:50.82. Rodrigues has a very steady race with his last 50 out splitting his third 50 by almost a full second.

Annika Winsnes had her revenge after taking second in the 50 to taking first in the 100 freestyle with a time of 52.06 and out touching Celia Ouellette who touched second with a 52.50. Chase Stephens continues his reign along with Mark Ferguson with respective times of 46.13 and 46.44 for Northwestern in the men’s 100 freestyle.

Claire Conlon dominates the breaststroke once again with an impressive 1:05.89 in the first 100 of her 200 breaststroke and takes the win for WKU with a time of 2:17.56. Northwestern takes second and third by Julianne Kurke and Meghan Goss with times of 2:19.24 and 2:23.03.

The men’s 200 breaststroke gives us a new hero, Van Donkersgoed of Northwestern in first place with a 2:02.86 while Connor Dwyer for WKU takes second with a 2:05.33.

Northwestern shows its dominance by taking another first and second place from WKU in the men’s 500 freestyle by Jordan Wilimovsky and Charlie Cole with times of 4:3.18 and 4:34.70. Third place went to Loui Little with a 4:36.51.

Western Kentucky went first and second in the 100 fly with Maggie Patterson and Courtney Marx busting out stellar times of 56.19 and 57.66. Ellen Stello takes third for Northwestern in a time of 58.10. Heitor Rodrigues does a clean sweep of the butterfly events and takes the 200 fly in a 49.25 while Northwestern claims second and third spots with Mark Ferguson and Andrew Jovanovic with times of 50.15 and 51.20.

Wrapping up the meet with the 200 freestyle relay, the WKU women shut down Northwestern. The first place relay of Celia Ouellette, Maggie Patterson, Natalie Lenderman and Paige Drazga took the win in a 1:34.44 which takes the Powell Natatorium record previously held by WKU of 1:34.81.

The WKU men also took first in the 200 freestyle relay with Heitor Rodrigues, Asymeric Le Corno, Richard Russell and Brennan Elsas with a time of 1:23.77. The Northwestern men took second with a 1:24.01.