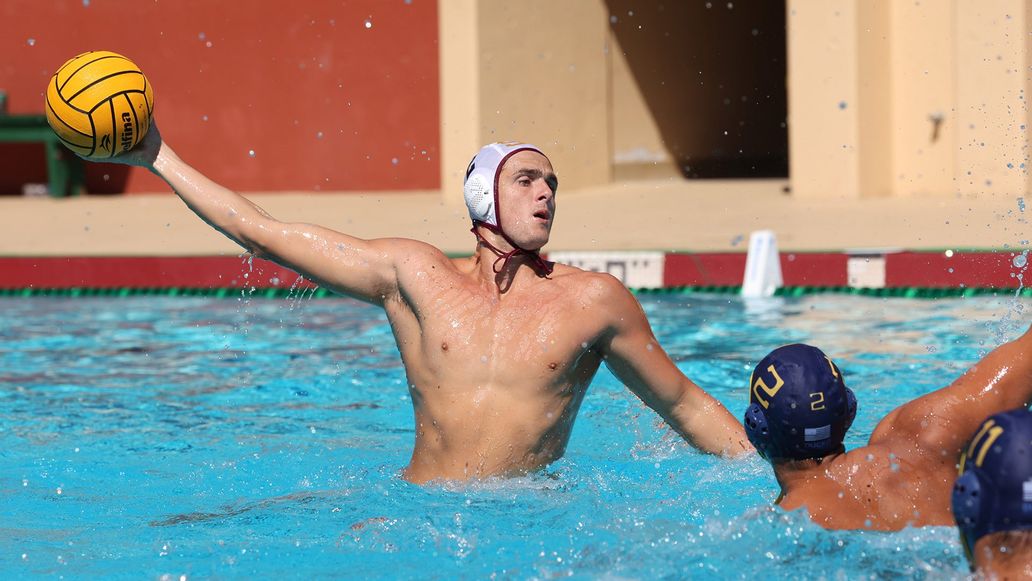 Trojans fight out of a three-goal hole but wind up short of Cal in an 11-10 defeat in the third-place game. Current photo via Stewart McGuire

STANFORD, CALIF. — The No. 5 USC men’s water polo team turned the tables on No. 1 California during today’s third-place game, but the Golden Bears got the late goals they needed to take back the lead and beat the Trojans 11-10 at the MPSF Invitational at Stanford’s Avery Aquatic Center. USC goes to 10-4 overall with the loss.

USC stalled out in the first frame while Cal drummed up a 3-0 lead in those first eight minutes. The Trojans roared to life in the next stretch, however. Three straight Trojan scores — from Ashworth Molthen, Max Miller and Massimo Di Martire — had the game back even at 3-3. Cal converted a power play next to nudge back ahead, only to see USC’s Di Martire punch up another equalizer to make it 4-4 not four minutes deep into the period. After a USC defensive takeaway and a 6-on-5 drawn by Jake Ehrhardt, Molthen found Andrej Grgurevic for the slam that gave USC its first lead of the game, up 5-4 at 3:25. The battle continued to heat up, with Cal clawing back and capturing back the lead after answering a Chris Sturtevant go-ahead goal with two Bear scores for a 7-6 Cal lead at halftime.

USC pieced together another offensive surge paired with some key defensive stops as the Trojans scored three straight. Molthen converted a USC  5-meter penalty shot, Evan Ausmus knocked in a USC 6-on-5, and Grgurevic laced in his second to lift Usc ahead 9-7 with 2:46 on the clock. Cal got two goals to go around a Marcus Longton laser, and it was 10-9 USC entering the fourth. In that final stretch, USC’s offense sputtered while Cal put away a pair of 6-on-5 opportunities. Trailing 11-10 with 2:12 to go, the Trojans were unable to break through and force overtime, taking the loss to wrap the tournament in fourth place.

NEXT:
USC has two games on tap next week, visiting UC Santa Barbara for a 12 p.m. clash on Friday (Sept. 30) before returning to home waters on Sunday (Oct. 2) to face UC Irvine at 12 p.m. at Uytengsu Aquatics Center.

NOTABLE:
– With his goal today, Marcus Longton extended his scoring streak to 14 games — the only Trojan to have scored in every game this season.
– With two goals today, Massimo Di Martire continues to lead USC in scoring this season, now with 32 goals.
– Evan Ausmus scored his first career goal against a top-five ranked opponent today.
– With two-goal outings today, Ashworth Molthen and Massimo Di Martire have matched Jake Ehrhardt with a team-high nine multiple-goal games so far this season