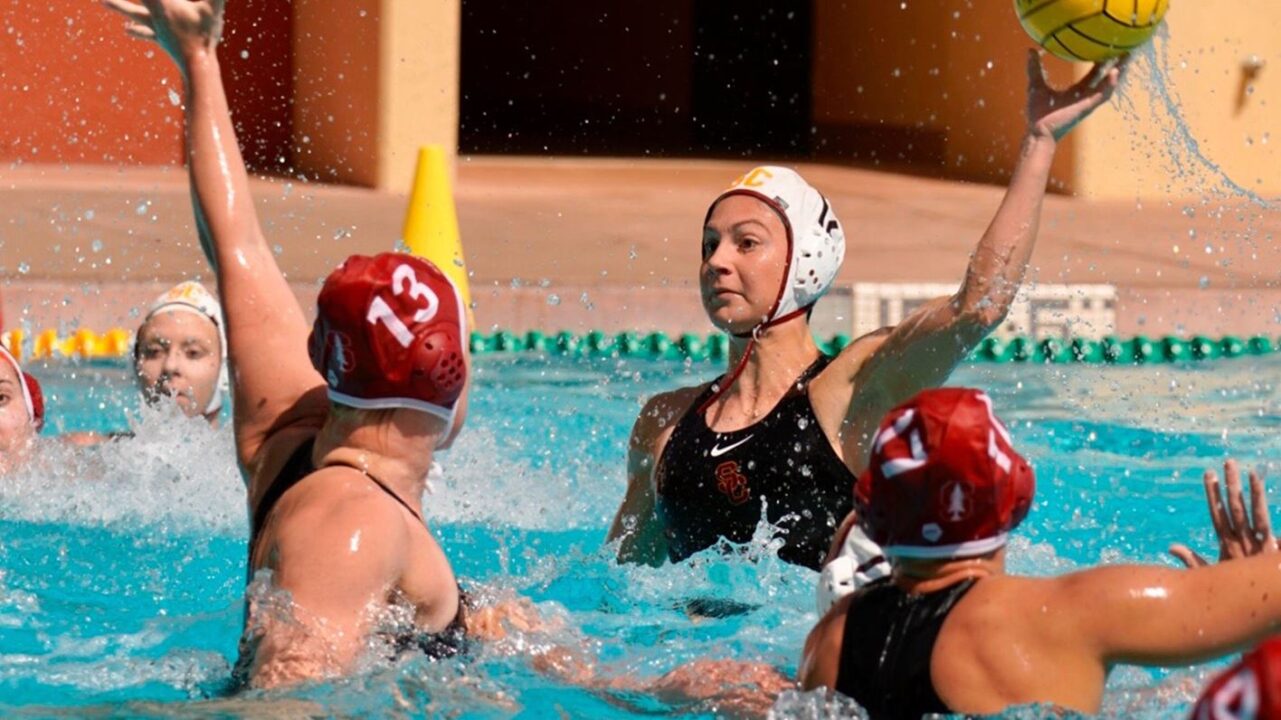 STANFORD, CALIF. — The No. 3 USC women’s water polo team made a power move in the second period to push past top-ranked host Stanford en route to a key 10-8 win over the Cardinal today at Avery Aquatic Center. The win avenges an earlier loss, but more importantly it gives USC a leg up in the MPSF standings, now at 14-2 overall and 3-0 in MPSF action,.

It was the first trip back to Stanford’s pool for three Trojans — Alejandra Aznar, Paige Hauschild and Tilly Kearns — since 2019 when Stanford edged the Trojans out for the national title that year. All three took time off for their National Team training after, and all three made the most of their return to Palo Alto today. Hauschild ripped in two big first-half goals while Aznar delivered a pair in the second half, including a key strike in the final minute to give USC a two-goal advantage. Kearns, meanwhile, drew four exclusions and had two field blocks.

The game opened up with Stanford scoring the first lead with a 6-on-5 finish. USC answered with a power-play blast of its own next, as Hauschild hit Bayley Weber for an early equalizer. The trend continued, and Stanford would move ahead again with another power-play strike, only to see the Trojans level it again on  Hauschild’s rocket off a feed from Grace Tehaney just 14 seconds later to knot it at 2-2 at the close of the  first. The Trojans would tally their first lead of the game with a sizzling strike out set from Mireia Guiral off a setup pass from Julia Janov to take USC ahead 3-2 at 4:59. Goalie Carolyne Stern snuffed a Stanford opportunity soon after, and then Kearns got USC up on a 6-on-5. The Tehaney-Hauschild connection proved fruitful again, with Hauschild lacing her shot to the top to get USC up 4-2. Stanford clawed back to within one on yet another power play, but USC was undeterred. Kearns went right back to work and earned her Trojans another 6-on-5 — this one seeing Hauschild and Tehaney switch roles as Tehaney hit the upper 90 for a 5-3 USC lead. Guiral came up with an interception next, and then Janov found Sophia Lucas for a crafty crosscage lob that had USC up 6-3 for halftime.

Stanford would get no closer than within two of the Trojans in the third. Aznar’s delivered a shot that was too hot to handle for Stanford’s goalie, making it 7-4, and then Aznar found her fellow Spaniard Guiral for a nice 6-on-5 series that built an 8-5 lead for USC. The Cardinal carved the margin down to one with 3:13 on the clock in the fourth, but USC stayed focused. Janov hit Tehaney for another ripper that made it 9-7 with 1:58 remaining. With 57 second left, Stanford snuck the score to 9-8, prompting the Trojans to dig deep. Tehaney found Aznar, who turned and lofted in a left-handed lob that did the job. Up 10-8, USC’s defense  held strong, and the Trojans’ important MPSF road win over No. 1 Stanford was in the books.

Next up for the Trojans is a trip to take on San José State at 12 p.m. tomorrow (April 3). The game will be held at the West Valley College Aquatics Center.