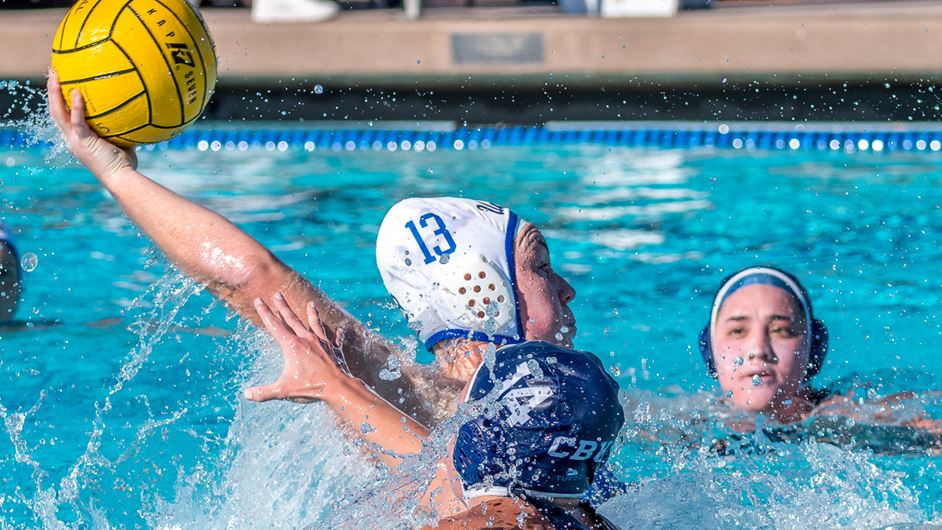 SANTA BARBARA, Calif. — No. 3 UCLA (5-0, 0-0 MPSF) went undefeated at the UCSB Winter Invitational on the opening weekend of women’s collegiate water polo with a 21-8 win at No. 18 UC Santa Barbara (4-2, 0-0 Big West) on Sunday evening at UCSB’s Campus Pool. UCLA improved to 43-2 in the series history. The 13-goal margin of victory was the third-most against the Gauchos in the series history and tied for the most goals scored when the Bruins beat UCSB by the exact same score at home on March 11, 2007.

The seniors absolutely dominated in this one with center Ava Johnson scoring a career-high five goals (on five shots) and adding an assist for six total points. Maddie Musselman scored four goals and was the leading scorer with three assists for seven points. Val Ayala scored four points, tallying two goals and two assists against the Gauchos. Freshman Molly Renner tried to crash the seniors’ party as she scored her first collegiate hat trick (all in the first quarter).

Redshirt junior goalkeeper Georgia Phillips got the start in the cage and went the distance, registering a career-high 18 saves while allowing eight goals.

Leigh Lyter and Aidan Flynn led the way for UCSB, each scoring two goals. But the Gauchos’ defense allowed the Bruins to score on 67.7 percent of their shots (21-of-31), and goalie Madison Button was only credited with one save.

PERIOD ONE
> UCLA outscored UCSB 6-1 in the opening period.
> The Bruins scored the first three goals of the game. Musselman got things started with a power play score (6:08) followed by a penalty shot conversion from Renner (5:31) and a strike from the front court from Ayala (4:45).
> After a goal by UCSB, the Bruins scored the final three goals of the period to build a 6-1 lead.
> Renner scored her second from the front court (2:58) and Johnson scored her first from set (2:18) before Renner completed her hat trick on another penalty shot (1:22).

PERIOD TWO
> The Bruins outscored the Gauchos 6-2 in the second period.
> After UCSB opened the scoring in the second frame (7:05), junior attacker Brooke Doten answered with a power play goal (6:23) for the Bruins.
> Imani Clemons scored at the 5:00 minute mark to pull UCSB to within four at 7-3. But the Bruins would score the next seven goals to put the game away.
> Musselman (4:22) and Johnson (3:34 – power play) each scored their second of the game to make it 9-3.
> Then sophomore attacker Malia Allen caught lightning in a bottle and scored on back-to-back possessions (2:03 and 1:22) to extend the lead to 11-3.
> Johnson completed her hat trick just before half (0:41) on a power play to end the scoring in the second period.
> UCLA led 12-3 at the break.

PERIOD THREE
> The Bruins dropped another six-spot on the scoreboard, outscoring UCSB 6-2 in the third quarter.
> Freshman attacker Emma Lineback opened the scoring in third quarter (6:40).
> After UCSB snapped the Bruins’ scoring run, UCLA started another one, with Ayala (5:32) scoring her second and Johnson scoring back-to-back from two meters (4:24 and 1:03) to push the lead to 17-4.
> The Gauchos would score again (0:39), but redshirt sophomore attacker Alex Peros converted a penalty shot (0:17) to end the scoring in the period with UCLA taking an 18-5 lead into the final quarter.

PERIOD FOUR
> The two teams battled to a 3-3 draw in the fourth period to provide the 21-8 final score.
> Junior attacker Fiona Kuesis scored twice in the fourth quarter (5:16 and 0:34) to help maintain the 13-goal advantage.
> Musselman netted her fourth on a strong near-side skip shot (3:08).