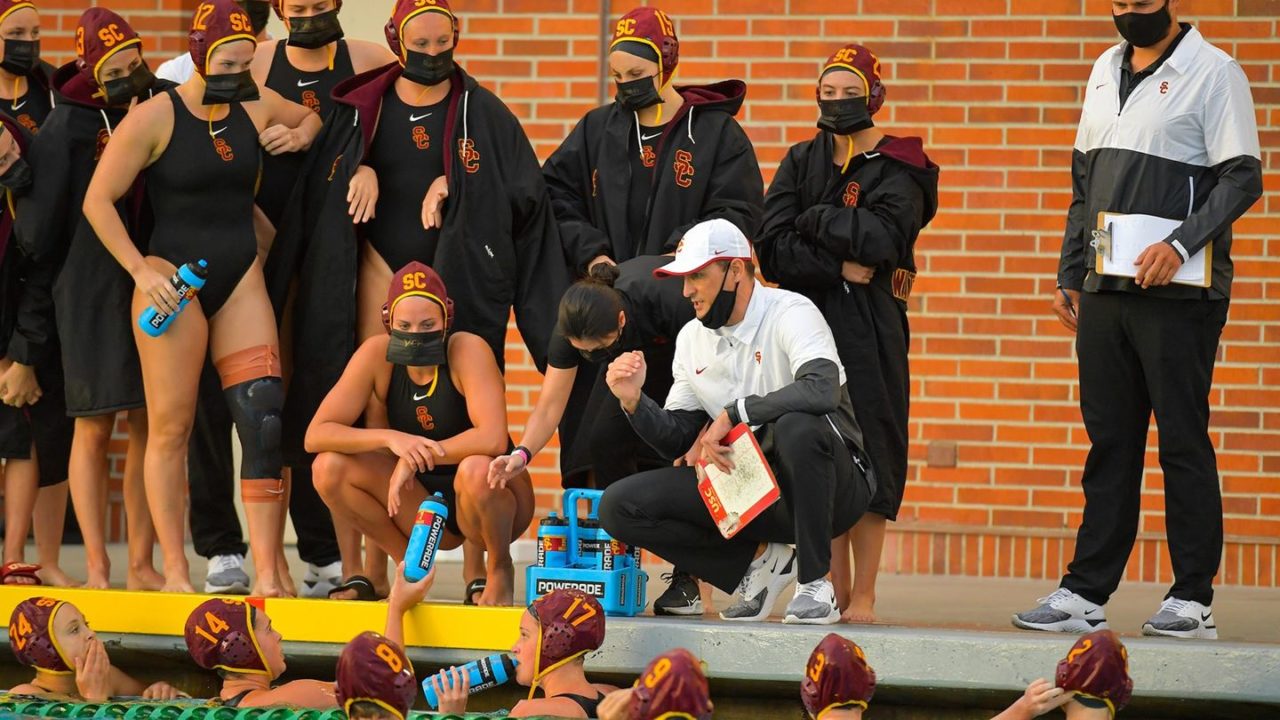 BLOOMINGTON, IND. — The No. 1 USC women’s water polo team unleashed a four-goal rally to turn a tied game into one that the Trojans could control, beating host No. 15 Indiana 10-8 today in USC’s first-ever visit to Bloomington, Ind. Denise Mammolito scored four goals for the Trojans, and goalie Holly Parker hauled in a career-high 12 saves to help hold off the Hoosiers. USC stays undefeated with the win at 11-0 and 5-0 in MPSF play. The Trojans and Hoosiers have another MPSF meeting tomorrow (April 3) at 10 a.m. PT at Indiana’s Counsilman Billingsley Aquatic Center.

An opening stalemate was cracked by Denise Mammolito eight seconds before the close of the first period, as the senior finished off a USC 6-on-5 to take a 1-0 lead. Indiana would get a long-range buzzer-beater to go, though, leaving it snarled up 1-1 entering the second. There, USC found its scoring touch, netting an perfect lob from Verica Bakoc for the lead. Indiana answered back with a score out of set, but it was all USC for the remainder of the frame. Bakoc went crosscage for the go-ahead again, and then Mireia Guiral earned a 5-meter penalty shot for the Trojans. Mammolito punched it in, and then would score on a solo mission 90 seconds later to get her third goal of the half. Kelsey McIntosh knocked in a 6-on-5 finish 11 seconds before halftime, making it fourth straight goals for USC and a 6-2 advantage at the break.
In the third, Indiana would carve USC’s lead down to two in sandwiching two-goal surges around goals from Bakoc and Julia Janov. In the fourth, Indiana got within one goal, making it 9-8 with 5:33 on the clock. Mammolito would get USC a little breathing room with a 6-on-5 strike for a 10-8 lead with 4:55 to go. That margin would hold as Parker and the Trojan defense held the Hoosiers silent for the duration. Parker squashed an Indiana 5-meter penalty shot along the way to the Trojan victory to help build out her career-high 12-save day.
#1 USC 10, #15 Indiana 8
April 2, 2021 | Counsilman Billingsley Aquatic Center (Bloomington, Ind.)
USC  1 – 5 – 2 – 2 = 10
IU      1 – 1 – 4 – 2 = 8
SCORING:
USC — Denise Mammolito 4, Verica Bakoc 3, Kelsey McIntosh 2, Julia Janov.
IU — Izzy Mandema 3, Mary Askew 2, Kallie White 2, Lanna Debow.
SAVES: Holly Parker (USC) 12, Mary Askew (IU) 6.
BLOOMINGTON, IND. – The No. 1 USC women’s water polo team turned the tide on a tight first half and swamped host No. 15 Indiana 19-10 with an overwhelming second-half surge in Bloomington, Ind. The Trojans piled up 10 goals and gave up just two in the final 16 minutes of action to buckle in another win, which featured a career-high-tying five goals from Denise Mammolito. USC remains undefeated, now at 12-0 overall and 4-0 in MPSF play.
It was a true battle throughout the first half, as the score snarled up even seven times as both teams were wrangling for an a advantage. USC finally found some momentum with back-to-back goals to break a 7-7 lockup late in the second period. Bayley Weber found Mireia Guiral for a blast from the post to edge USC ahead 8-7. Twenty seconds later, Guiral found Denise Mammolito on the court, and the senior finished it off for her fourth goal of the half, taking USC ahead 9-7. In the final seconds, Indiana snuck in a score from distance, making it 9-8 at halftime.
The tense first 16 minutes seemed to serve notice to the Trojans, who ended an early stalemate with a 6-on-5 strike from Grace Tehaney at 4:21. Verica Bakoc fed Kelsey McIntosh next, and USC had its largest lead with a three-goal advantage at 11-8. The Hoosiers fired back with a score from the post, but that would be all the Trojans would allow for the next nine minutes of play. In the meantime, USC made a six-goal scoring surge that spanned the third and fourth frames. Mammolito found her fifth of the day with a 5-meter penalty rocket, earned by Bayley Weber. Weber would follow with a counterattack slam, and Grace Tehaney tallied her second of the frame with a fake-and-fire that got USC ahead 15-9 by the end of the third. In the fourth, goalie Holly Parker, who stepped into the cage at halftime, knocked down a Hoosier 5-meter penalty try to keep USC chugging right along. Bakoc and Weber would follow with their third goals of the day, and although Indiana managed a 6-on-5 skipper to snap USC’s run, the Trojans were not done. Claire Haas punched up her first goal of the season to make it 18-10, and then Sabrina Garabet laced one last goal in for the Trojan cause to round out the 19-10 Usc road win.
Next up for the Trojans is a return to home waters for a run of four straight MPSF matchups. Next weekend, USC hosts Stanford in a pair of 1 p.m. contests on Saturday (April 10) and Sunday (April 11) at Uytengsu Aquatics Center.
#1 USC 19, #15 Indiana 10
April 3, 2021 | Counsilman Billingsley Aquatic Center (Bloomington, Ind.)
USC   3 – 6 – 6 – 4 = 19
IU       3 – 5  – 1 – 1 = 10
SCORING:
USC — Denise Mammolito 5, Verica Bakoc 3, Bayley Weber 3, Mireia Guiral 2, Grace Tehaney 2, Sophia Lucas, Kelsey McIntosh, Claire Haas, Sabrina Garabet.
IU — Lanna Debow 3, Zoe Crouch 2, Izzy Mandema 2, Tina Doherty 2, Mary Askew.