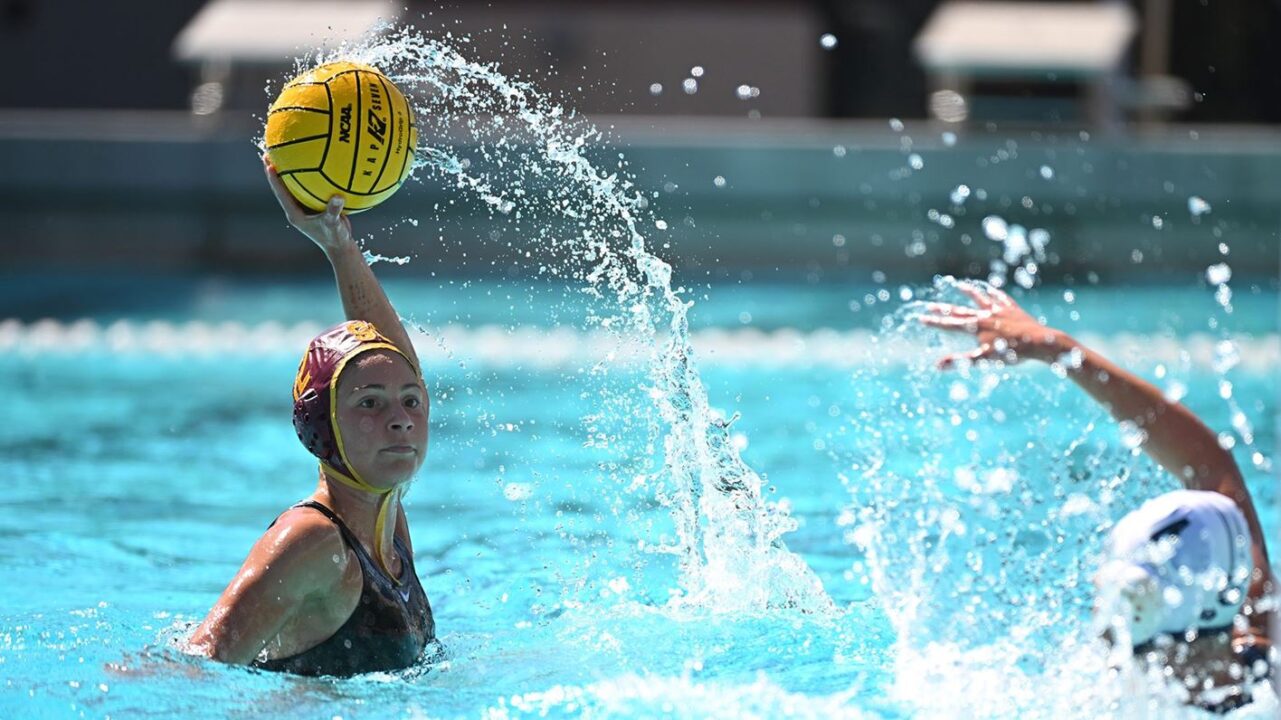 The win puts the host Trojans into position to fight for a fourth straight MPSF Tournament title, set to take on Stanford on Sunday. Current photo via John McGillen

LOS ANGELES — The No. 1 USC women’s water polo team countered an early effort from No. 4 California with a couple key scoring rallies, turning a two-goal deficit into a four-goal lead before closing things out as a 10-8 MPSF semifinal victory today at Uytengsu Aquatics Center. The win puts the host Trojans into position to fight for a fourth straight MPSF Tournament title, as top-seeded USC squares off against No. Stanford tomorrow (April 24) at 2:30 p.m. in the championship bout.

Cal flexed its scoring muscle early, punching up a quick lead before Alejandra Aznar answered with her first of three goals on the day. The equalizer did not deter the Golden Bears, who snapped off back-to-back blasts next to build a 3-1 lead not even two minutes into the game. Grace Tehaney let fly a laser to get one back, but Cal converted on a 6-on-5 next, and the Bears would lead it 4-2 after one period of play. Duly awoken, USC got in a groove next with three straight scores — a fake-and-fire from Aznar, a 5-meter penalty shot from Bayley Weber and a nifty rocket from Paige Hauschild — to take its first lead, up 5-4. Again, Cal would finish off a power play, and it would stand knotted at 5-5 for halftime.

The USC defense would stay stingy in the third, again allowing just a single Cal goal while Tilly Kearns and Weber ripped in a goal apiece to carry USC ahead 7-6 entering the fourth. There, the Trojans made it a four-goal surge while turning defensive plays into scores at the other end. Mireia Guiral fired off a 6-on-5 finish to get USC some padding at last, up 8-6 midway through the fourth. Aznar found Kearns for a ripper that took USC ahead 9-6, and after a Hauschild steal and a 6-on-5 miss by the Bears, Aznar fizzed in a fiery blast to balloon the Trojan advantage to 10-6 with 1:44 to go. Cal got two scores through in the remaining time, but USC’s comeback surge was well intact as the  Trojans emerged with the 10-8 decision to punch its ticket to the 2022 title match.

Tomorrow’s MPSF action at Uytengsu Aquatics Center features three placement games. At 11 a.m., Indiana faces San José State in the fifth-place game, followed by a 12:45 p.m. third-place game between UCLA and Cal. The championship match its set for 2:30 p.m. between the Trojans and the Cardinal.

LOS ANGELES – The No. 6 Cal women’s water polo team went back and forth with No. 1 USC for 3½ quarters Saturday before the Trojans ultimately outlasted the Bears 10-8 in the semifinals of the MPSF Championships at Uytengsu Aquatics Center.

Cal All-American Emma Wright had four goals and two assists – including scores on each of the Bears’ first three possessions of the game – while sophomore Ruby Swadling added two goals and an assist. Junior goalie Isabel Williams had 10 saves, including a point-blank stop on USC All-MPSF senior Bayley Webber just before halftime and the score tied at 5-5.

The Bears played the game without injured starting attackers Elli Protopapas and Maryn Dempsey, who have combined for 35 goals this season.

Wright’s early-game outburst helped the Bears build a 3-1 lead before two minutes had elapsed in the game. Swadling’s first goal – on which Wright provided an assist – gave Cal a 4-2 advantage at the end of the first period.

The Trojans scored the next three goals to take their first lead of the game, but Swadling’s power play goal with 1:05 left in the second quarter tied it once again.

After USC went back in front early in the third period, Wright registered her final goal on the ensuing possession off an assist from freshman Rozanne Voorvelt to make it 6-6 at the 5:44 mark. The Trojans held a 7-6 lead midway through the fourth quarter but tacked on three more goals in a row to take command.

All-American center Kitty Lynn Joustra and sophomore Reagan Whitney added goals for the Bears in the final two minutes of the game.

Williams moved into fourth place on Cal’s all-time single-season saves list with 209 this season. She also now has 257 career saves and needs 10 more to take over ninth place on the program’s career saves list.

Meanwhile, Wright moved closer to the No. 4 spot on Cal’s all-time scoring list. She now has 197 career goals, two behind Kaliya Young’s 199.