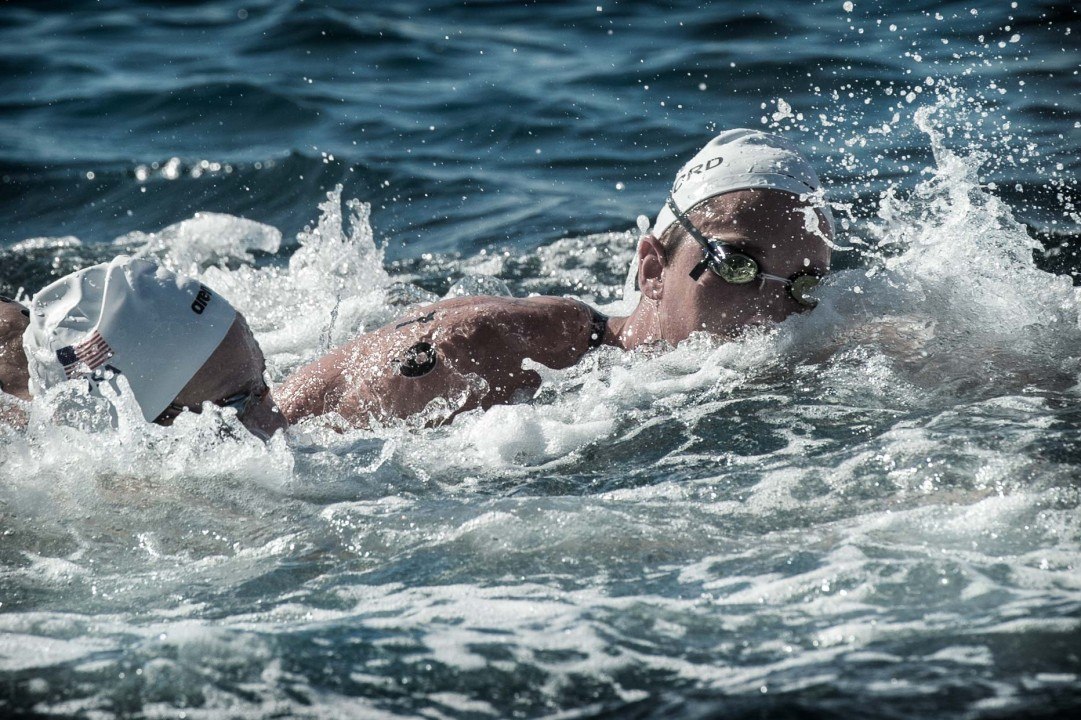 New Zealand Swimming has announced that they won’t be sending Kane Radford or Charlotte Webby to swim at the 2016 Summer Olympic... Archive photo via Mike Lewis/Ola Vista Photography

New Zealand Swimming has announced that they won’t be sending Kane Radford or Charlotte Webby to swim at the 2016 Summer Olympic Games in the open water 10k, despite both earning a qualification via the 15 spots available at last weekend’s Olympic Qualifying race in Setubal, Portugal.

At that race, the top 10 finishers in each the men’s and women’s races, based on the 1-per-country limit, were direct qualifiers through to the Olympics. Among the remaining finishers, the best swimmer from each of the 5 global regions – the Americas, Africa, Europe, Asia and Oceania – again, in consideration of the 1-per-country rule, were selected as continental representatives to the Olympic Games.

In the cases of both Radford and Webby, they were each the top-finishing swimmer outside of the top 10 from the Oceanic region. That means that, from the perspective of FINA, they were both declared as qualified for the Olympic Games.

New Zealand, however, says they don’t believe that either swimmer would be competitive enough in Rio to warrant their selection.

The statement read, in part:

However the selectors were not satisfied that there was sufficient evidence that either of the swimmers is capable of achieving the published nomination criteria which is that an individual swimmer must be capable of achieving a top 16 placing at the Games with the potential to win an Olympic Diploma (top eight placing).

This is the over-arching criteria established by the New Zealand Olympic Committee for selection of all New Zealand athletes across all sports.

While many swimming federations have established stricter-than-FINA standards for pool swimming, it’s been rare to do so in the 3 editions of Olympic marathon swimming giving the relatively compact (25 swimmers per gender) fields.

Webby finished over five minutes behind the winner of the qualifying race, and Radford was around 34 seconds back in the men’s swim. Both swimmers, however, could have swum the race with a reasonable suspicion that so long as they were the fastest Oceanic swimmers from outside of Australia, they would earn qualification based on their results.

National Olympic Committees have one more week to confirm their qualification places, and if Radford and Webby are not confirmed by New Zealand, then the empty spots will go to the next-best ranked swimmer not already qualified, regardless of continent.

While a vaguely-written qualification rule by FINA doesn’t specify that the one-per-country rule will still hold true in re-allocating those unused spots, we’ll assume that the intent is to apply that rule to the re-allocation as well. That would reallocate the women’s spot to Vania Nevers of Portugal in the women’s race, the 16th-place finisher at the qualifier; and Antonio Arroyo of Spain on the men’s side, who was 15th in the qualifier.

We have reached out to FINA to verify who would be next-in-line to receive those spots, and they said that the next qualifiers will be announced as soon as they are confirmed by their National Olympic Committees. We’ve also reached out to Radford to inquire as to whether he would fight the decision. As of posting, neither party had responded to those requests.

25 spots total per gender and they say no…. wow

That is horrendous. So sorry for Kane Radford. Just not right.

I disagree with NZOC. I am sure that Kane would have been among the athletes in the field that is capable of a top-12 finish. Following reasons: 1) The open water is an extremely tight race due to slipstreaming. For example: Abu Dhabi 55+ swimmers stuck for six and a half out of ten kilometres. Then the narrow timing gates och the distant feeding platform shut down a few swimmers. In Rio 15-20 swimmers should stay together for almost the whole race. 2) Kane is experienced and knows the game enough to be within the range of a top-10 finish. In Setubal he spent some time of the race as high as number eight around 5.500-6.000 m. Moving up in… Read more »

Whilst I have compassion for the two impacted swimmers, I’m coming down on the side of NZOC who are certainly not being inconsistent in this case but actually hold this standard line across ALL sports, even their strongest sports !! Sadly, both swimmers were well outside the top10 criteria that would have guaranteed selection thus placing themselves in the position of requiring a discretional call by NZOC. People need to realise that most other countries do NOT have the luxury of the USOC and their resources are finite. Many, like New Zealand, have taken the decision of NOT trying to send the biggest team possible but rather only sending those who are most likely to be competitive & in most… Read more »

Unfortunately your point about taking a competitive team to the Olympics is valid in many of the sports, but the statement from Swimming NZ that Kane Radford would not be competitive is just a joke… Half of the NZ swimming team that have qualified will definitely not make the top 16 and yet thats what they are basing Kanes non selection on?? Competitive?? Give me a break. It makes no sense besides the fact that Swimming NZ have no idea about Open Water swimming and treat it like the ugly step sister of pool swimming. Swimming NZ are a joke and I hope Kane appeals this.

Yes, I will agree that almost all outside Lauren Boyle will not make finals but their situation is not synonymous. They met the selection criteria by swimming the QT for their events thus taking any selectors/NZOC discretion out of the picture. Mr Radford & Ms Webby failed to do so. Had they placed sufficiently highly at last years Worlds, they’d have booked themselves a ticket.. period. Had they finished top 10 in these races even if they weren’t no1 from Oceania, they’d almost certainly have selected ……. but they failed to do so.

I fully agree that they are well within their rights to appeal but, as a practicising lawyer, I wouldn’t be taking their case.

I’m not sure what your NZ connection is, but I think that you misread the NZ Selection Policy and the inconsistency of its application between Pool and Open Water selection. Your assertion that the SNZ selectors had no discretion to apply the top 16 criteria for Pool, once they met the QT is not correct. It has never been applied, but it is not correct to say that the overriding criteria does not apply to Pool and is just as relevant to Pool as it is to Open Water. The difference is that it is only being applied against Open Water. Selection policy should be fair, transparent, and applied consistently. SNZ’s announcement does not meet that standard.

Unfortunately your statement in regards to the times taking the selectors discretion out of the picture is wrong… The selectors if they feel the swimmers times albeit qualifying will not be competitive or make them a top 16 prospect can within their discretion not select them… If this is the case why have they not done so, as we both know there are swimmers that have qualified that are going really to make numbers. If they were serious about the top 16 / competitive statement they would have gone the path of the French federation and made qualifying harder. The point I think people are trying to make is that there seems to be one set of rules for pool… Read more »

“Thats good to hear you wouldnt take his case – I doubt that he would ask you as it seems that his legal advice comes from some pretty impressive lawyers who have also swum for their country.. Swimming NZ are looking for a new CEO, I believe they would love a person like you to put your name in the mix”

Vote Up10Vote Down Reply
you for real?

Not true. If they make the time, they WILL go barring injury or things like crime etc. This is because the standards NZOC sets are based on times that they think will lead to at least a top 16 finish. The same goes for the open water criteria. Kane and Charlotte weren’t even close, so it came to discretion. You’ll notice there were ZERO pool swimmers who were put on the team for a Fina B Standard. Why should this change for open water?

They did the same thing in 2012, which let Guam compete in the men’s race, too bad no other Oceania nation competed.