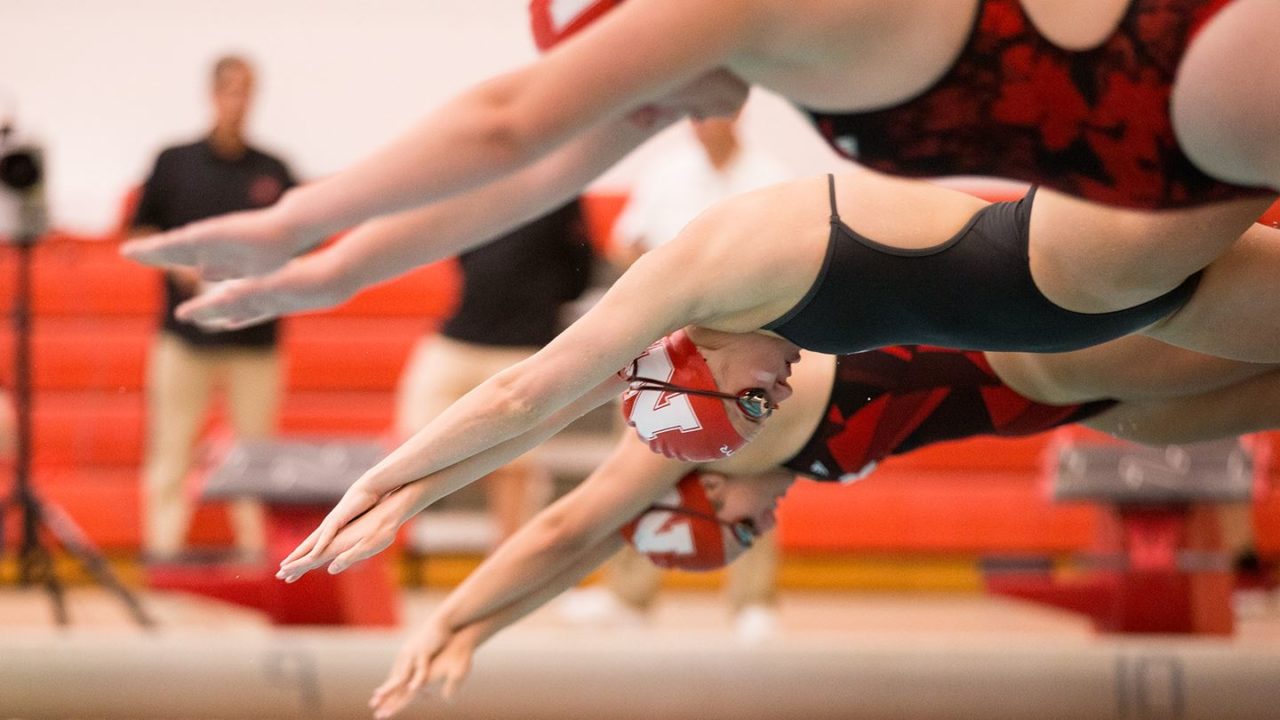 On Saturday afternoon, the Huskers wrapped up a strong opening weekend with a 143-100 win over UNI in Cedar Falls, Iowa. Current photo via Maddie Washburn, Nebraska Communications

CEDAR FALLS, Iowa – The Nebraska swimming and diving team celebrated its opening weekend of the 2019-20 season with a 2-0 start by cruising to road wins over South Dakota State and Northern Iowa.

On Saturday afternoon, the Huskers wrapped up a strong opening weekend with a 143-100 win over UNI in Cedar Falls. Nebraska’s performance at UNI followed an impressive 154.5-88.5 victory at South Dakota State in Brookings on Friday afternoon.

The Husker divers added some dominant performances of their own at UNI. Sara Troyer took back-to-back victories in both the one- and three-meter dives on Saturday. The sophomore from Goshen, Ind., won the one meter with an NCAA-qualifying score of 281.93 before adding another NCAA-qualifying total of 302.63 on the three-meter board.

Fellow sophomore Hallie Roman added a runner-up finish on the one meter (240.67), while junior Grace Tiernon added third-place finishes in both the one (234.14) and three-meter dives (252.08).

The Huskers split the relay series against the Panthers, winning the 200-yard freestyle relay (1:38.40) thanks to the strong swimming of Haebig, Gonzalez, Savitt and Beeler, and finished as runner-ups in the 200-yard medley relay (1:47.96) coming from swimmers Gonzalez, Worlton, Murray and Kopas.

CEDAR FALLS, Iowa – The UNI swim and dive team fell to the Nebraska Cornhuskers in their first home meet of the season. The final score was Nebraska 143 to UNI 100.

Moriah Ross added another individual win for the Panthers in the 200 breaststroke with a time of 2:21.08. Ross, Taylor, and Schmidt, along with Madeline Webb, also took first in the 200 medley relay with a time of 1:46.55.

The Panthers next meet will be back home at Glen F. Henry Pool next Friday, October 18 against Mankato State at 5:00pm.