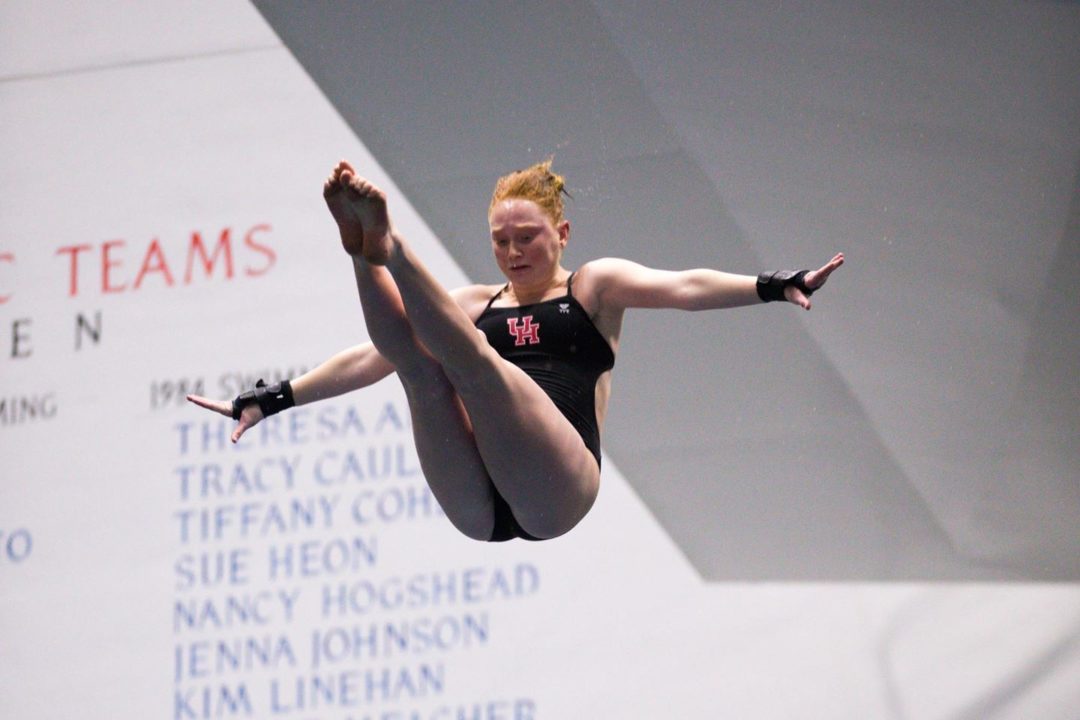 HOUSTON – The University of Houston Swimming & Diving program posted a third-place finish at the Rice Fall Invitational and defended its home turf by winning the Houston Diving Invitational.

The Cougars tacked on 160.00 points for a first-place team finish.

The Cougars swept the 1-meter, as Jolie Blodgett, Katie Deininger, and Chase Farris took the top-three spots in the event. Blodgett won the 1-meter with a score of 266.05, racking up 48.10 points on her opening dive after successfully performing a Forward 2 ½ Somersault Pike. Deininger scored 264.75 points for second-place, followed by Farris in third-place with 251.30 points.

Deininger and Farris notched top-five finishes in the 3-meter as well as Deininger finished the event with 291.55 points for second-place after collecting 54.60 points on her second dive of the day (Back 2 ½ Somersault Tuck). Farris finished the event in fifth-place with 271.10 points.

In the final diving event of the meet, Farris walked away with a first-place finish after scoring 237.95 points on the Platform. Farris scored a staggering 66.70 points on her final dive of the day after successfully performing a Forward 2 ½ Somersault 1 Twist Pike off the 10-meter platform. Blodgett finished among the top-five in the event with 200.10 points for fourth-place.

UP NEXT
Houston will return to action on Oct. 23 when the squad host SMU for a American Athletic Conference clash.

On Saturday, at the Houston Diving Invitational, Camryn Hidalgo had another good day for the Jackets, finishing second on the platform and earning a score of 231.30. Paige Gohr placed third (215.80), while Carmen Woodruff came in fifth (199.25).

On Friday, the Jackets claimed three of the top four divers on the 3-meter board. Hidalgo placed first overall with a score of 314.55. Senior Carly Doi (287.75) and Woodruff (279.70) finished third and fourth, respectively.