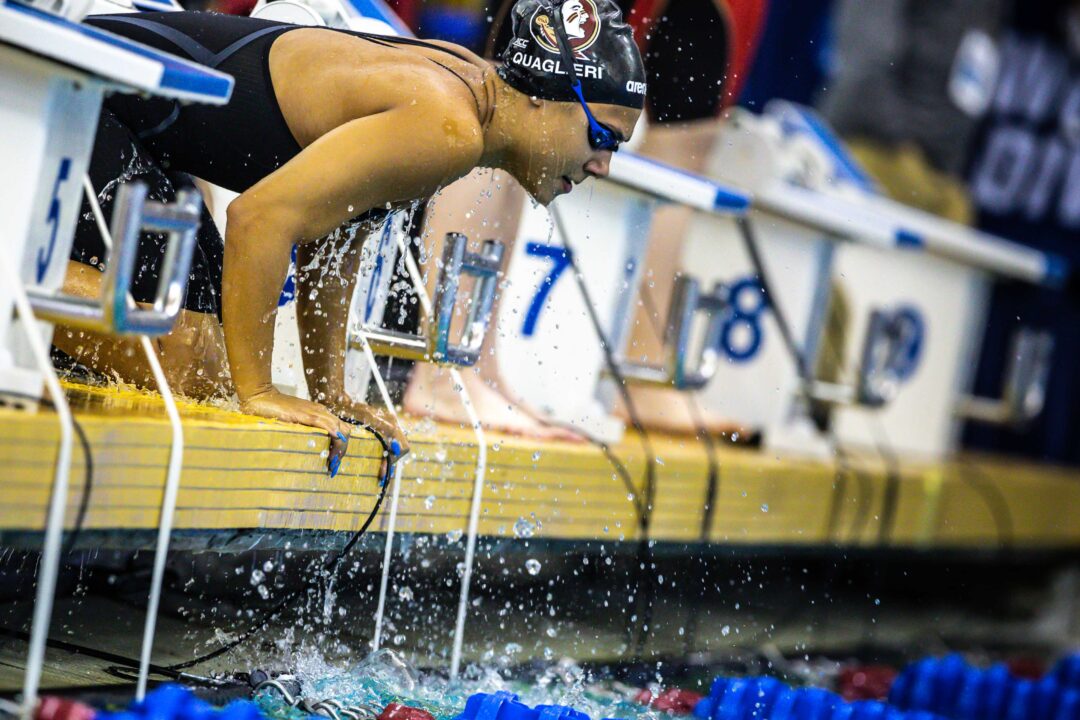 Quaglieri plans on swimming for the Seminoles in the 2022-23 season, and entered the portal to explore her options for her fifth year. Archive photo via Jack Spitser/Spitser Photography

Tania Quaglieri, a senior swimming for Florida State University, has entered the transfer portal. She plans on swimming for the Seminoles this season, and is exploring her options for her 5th year of eligibility (the 2023-24 NCAA season).

“I am looking for a 5th year somewhere outside my college,” Qugalieri told SwimSwam. “I feel I need a change in my life and I am willing to risk it all to pursue my studies in grad school and for the last swimming season of my career that hopefully will be done in Paris 2024.”

However, Quaglieri saw a sharp improvement in her sophomore season, especially in the 100 back. There, she dropped nearly a second from her freshman best and went 52.17 to finish 6th at ACCss—a time that still stands as the Florida State program record. She also set PBs in the sprint freestyle events at ACCs, finishing 9th in the 100 free (49.16) and clocking a 22.70 in a 50 free prelims swim-off (she had tied for 26th with two other swimmers and had to participate in a swim-off to determine the second second ‘C’-final alternate). Her 44 individual points from that meet were the second-post out of any of the Florida State women, just trailing Phoebe Griffiths‘ 56 points.

Internationally, Quaglieri represents Italy. The last time she competed at a major international meet was the 2017 World Junior Championships and the 2017 European Short Course Championships, although her best time of 1:00.96 in the 100 back set back in 2016 would have ranked her third amongst Italians this year and put her in contention for potentially making an international team in the future.

Julia Cook graduated, Texas could use you! What are your studies?