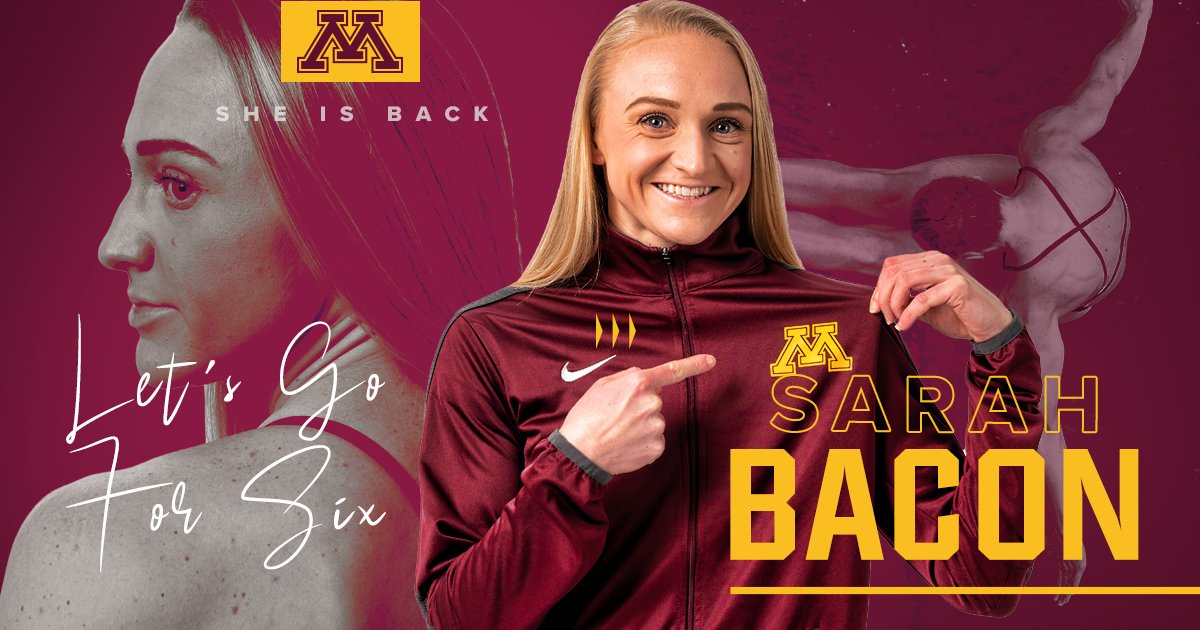 4-time NCAA Champion diver Sarah Bacon will use her bonus 5th year of eligibility after a change-of-heart from her post-NCAA Championship decision. Current photo via Minnesota Athletics

In an about-face from her initial plans, NCAA Diver of the Year Sarah Bacon has announced that she plans to return to the University of Minnesota to use her 5th year of eligibility in the 2021-2022 season.

Bacon is one of three Gopher seniors who will take advantage of the NCAA waiver that awards all athletes who competed in the 2020-2021 collegiate season an extra year of eligibility because of the complications of the COVID-19 pandemic. Besides the NCAA Champion Bacon, the Gophers will also welcome Emily Cook back for the women’s team and Cameron Kelley back for the men’s team.

“With all of the challenges provided last season to connect and come together as a team, we are incredibly fortunate to have these great Gophers and leaders come back for another season,” said Minnesota head coach Kelly Kremer. “Their leadership will be exceptionally valuable in pulling our team together.”

Shortly after the conclusion of the collegiate season, Bacon told SwimSwam’s Sarah Bacon that she wasn’t planning to use her 5th year of eligibility and instead focusing on training toward Tokyo and, possibly, 2024.

“A couple different factors affected my decision,” Bacon told Swimswam on Thursday via email. “To be honest, I was 100% expecting to make the Olympic team this summer. After not making it, I knew I wanted to keep diving and more importantly wanted to keep diving with (Minnesota head diving coach) Wenbo (Chen).

“With all the hours of training it takes to become an elite diver I really have no time to get a job so financially it made the most sense for me to go back to school, get a masters degree, and compete one more year for the gophers since I will now be diving until 2024 anyways. The NIL deals helped weigh my decision in going back hut that wasn’t the only reason I decided to go back and compete in the NCAA one last time.”

Watch that interview below:

The return for the Gophers gives them a massive boost for not only the best diver in program history, but one of the best athletes in University of Minnesota history. After winning the 1-meter and 3-meter springboard titles at NCAAs in 2021, plus 1-meter titles in 2018 and 2019, she is now the winningest female athlete in Minnesota history in any sport.

Bacon finished 2nd in the women’s synchronized 3 meter event at June’s USA Diving Olympic Trials, but only one pair is chosen for the Olympics in that event. She finished 3rd in the individual 3-meter at Trials as well, but only 2 go to the Olympics.

The Gophers will also get an extra year from backstroker Emily Cook for the women’s team. Cook spent her freshman season at Washington State and has swum the last 3 for Minnesota. In those 3 seasons, she has qualified for the NCAA Championships twice: in 2019, she earned All-America honors on the leadoff leg of Minnesota’s medley relays which were 11th (200 yard) and 7th (400 yard), respectively. She was then invited to the 2020 NCAA Championships before it was ultimately canceled by the COVID-19 pandemic.

She was the backstroker on Minnesota’s medley relays as well in 2021, but those relays didn’t qualify for the Big Ten Championships.

Her top finish individually at the 2021 Big Ten Championships came in the 100 backstroke where she placed 7th, earning 23 points. That made her the team’s 5th-best individual swimming scorer at those championships where the Gophers finished 6th out of 13 teams.

The men’s team will get a boost from the return of Cameron Kelley, an Olympic Trials qualifier (wave I).

Over the summer, Kelley has really progressed in the sprint races as well, specifically swimming a best time of 52.43 in the 100 meter free and 1:52.86 in the 200 meter free at Sectionals earlier this month.